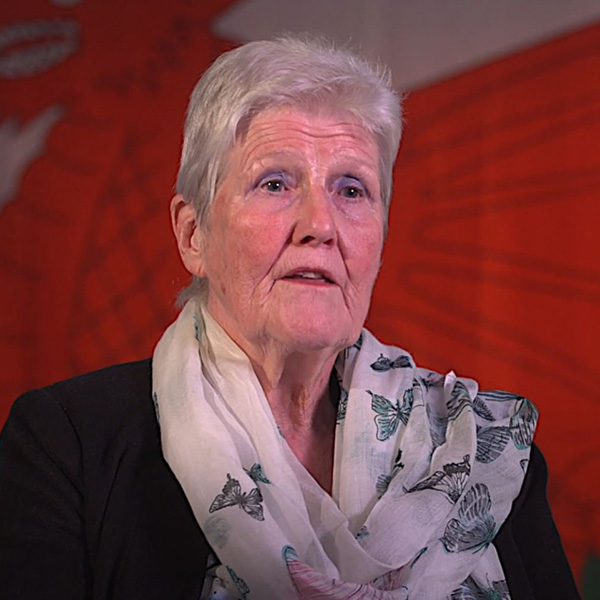 Anna Davies describes her role as a teacher at the Tonfanau Camp in Wales, in 1972, at the time of the arrival of Ugandan Asians. Other topics discussed include: camp boredom; bleak conditions; and cultural differences. As well as reflections upon comparisons to more recent refugee crisis such as that of Ukraine and Afghanistan.

How she got involved

0:42 Not long after the Ugandan Asians arrived, I had a phone call from the Education office in Dolgellau saying, that erm, would I be interested in having any contact with the Ugandan Asians and helping them. So I said. fine, yes. Erm, and it turned out that I was just doing two or three afternoons a week and I wasn’t with youngsters who I had been teaching previously but with the ladies of the camp – the mums. I think by then they had brought in lots of people to educate the youngsters and they got health people and this sort of thing.

1:21 But I think the ladies were getting a bit bored, because after all they were stuck in the camp. I mean, Tywyn and transport is not the easiest of places [laughs]. So therefore, to try and get to places was not great and they thought it would be a good idea if the ladies had the opportunity to develop their English language skills and to learn a bit about life in the community, or in the English or Welsh communities.

Teaching the women at the camp

1:49 So I’d go over to the camp, what, two- three afternoons a week, and we’d meet up in [sighs] … a barracks, room. Yes, it was really a bleak room, I have to say. It wasn’t conducive to anything and we’d just chat because I decided that that was the only way that they were really going to learn anything.

2:12 Some of them had very good English. Some of the older ones, it was not quite so good.  So we did things like practising going to buy apples and I took magazines along and they had magazines to read, to look at. I mean nothing very exciting – ‘Woman’ and ‘Good Housekeeping’, you know, and ‘Woman’s Own’ – and we talked about things in general, just er life and how it suited us and about family life.

2:40 So I told them about my children as most mums, young mums do [laughs], and how brilliant they were, of course. It was an interesting insight into their attitudes as well, in that I uhm.  I was talking about having a little girl first, Siân, and how gorgeous she was and all the rest of it and they went ‘Ohhhhh’. I thought, right – that’s a bit odd! ‘And then we had a little boy and he is a year old now’ and they said, ‘Oh that’s lovely’ and I said, ‘Oh but why the difference? Because I am just pleased I’ve got two little children who are well and fit and healthy.’ And they said, ‘Oh well, you know when you have a girl, the gold goes out of the family, but when you have a boy, the gold comes in.’ And well, I couldn’t believe this story [laughs]. It was a very different attitude to things than we have got now.

3:40 At that time, Tywyn was a very parochial, and not cosmopolitan at all. And you have to remember, in ’72, things like vegetarians weren’t around really, and so I the ladies, some of the ladies to come for afternoon tea and I did remember, of course, a lot of them were vegetarian. So trying to make afternoon tea, which in my usual pattern, you’d have had salmon and cucumber sandwiches, and you’d have had a nice cake, Victoria sandwich, and you’d have had, you know all the usual bits. And I thought, I can’t give them salmon and cucumber. We can just have few cucumber sandwiches. We can have erm, I made Bara Brith with margarine which I would never dream of doing normally [laughs] and, I thought well that was OK, and I found a recipe for an apple cake because I thought, that one hadn’t got  eggs in, so then I thought I was safe with that one for them. And, we had jam sandwiches, which again is not my scene for afternoon tea. But the ladies seemed to enjoy it, you know, and it meant that they came and saw what our house was like, and we weren’t rich at the time, we hadn’t got loads of money. So, I mean it was just an ordinary life. I’m sure they’d had far better lives. My house was probably very very basic and much more primitive than the houses that they had come from. Because they, obviously, I think, had a far better standard of living in Uganda than we as locals had, in general terms. But, we didn’t have to fear Idi Amin.

5:18 I remember that when they arrived, there was a lot of talk of how scared some of the Asians were coming off the train, just because, the soldiers, some of the soldiers were there because they were clearing up the camp, making it ready for the Asians. And therefore, they were on the platform to help them off the train and to get their belongings off – not that they had that many of belongings I don’t mean that – and how frightened they were of seeing these soldiers because they were not- they were thinking of what they had just left and after all it had been a traumatic journey to get there. And to then see soldiers again, I think must have frightened them a lot.

5:59 And the other thing I remember was a friend taking the erm, girls, to the beach, thinking well it was a nice enough day to go down to the beach wrapped up – remember it id Tywyn in winter [laughs]. And the girls being quite scared because they had thought that a lot of the seaweed had been washed up and was floating in the water and they thought it was crocodiles, which hadn’t dawned on any of us! And I mean, they were very relieved when they knew that it wasn’t crocodiles I have to say [laughs]. But I don’t think they bothered to go paddling, certainly not in winter weather anyway [laughs].

Perceptions of the Ugandan Asians

6:40 I mean at the time, I am sure Tywyn people hadn’t seen many Asian faces at all! Because it was a parochial Welsh community. I mean we saw the soldiers coming in, so we had different people coming in at that time but I don’t think there were that many different people around.

7:00 I am not sure how much prior to the situation, and when Idi Amin made his announcement, that we knew an awful lot about Africa, or India or Pakistan at the time. I mean, we did know…

7:14 Certainly I knew about the Indian Pakistani wars, because at one stage I was teaching in a school with Indian and Pakistani children, and how they got very het up with one another. And so, I knew about that situation, but I think we have to remember too that the whole world was much bigger then in that Africa was out of your remit, really and truly. It was so far away… That the fact that I have been there on holiday and things since then seems fantastic –  I would have never dreamt of it! – in 1972. It was a long way away.

7:57 The history, I mean, I knew that the Asians had been recruited more or less by the British to go to Africa to help run, because they knew that they were very capable at civil service type jobs and these sort of things as well, and so they knew that they had that capability, but that again comes to the fact that why we didn’t they think African people would – either? But, I suppose that’s the start of it all, isn’t it? That as a government in the long distant past, we thought we could shift communities around and let them mix, as much and as like yeah [?], and not create problems.

The government seemed to have organised things, whether – I mean, it wasn’t the Welsh Assembly then – but the government in practice- the health, the education, the civil servants… I was saying earlier, that the civil service – it was the Ugandan Asians that got my  sister-in-law, as she is now, a job! Because she had passed her civil service exams but couldn’t get a job in Aberyswyth. And then of course they had to bring- they brought the civil servants to Tywyn to help sort out National Insurance numbers and all of those sort of things for the Ugandan Asians and those sort of things for people. So she managed to get into the civil service in Aberyswyth. And that’s when she started her career in civil service. So you know, it had a knock on effect for people in general.

9:22 I wonder why we aren’t taking the same attitude that the government did at that stage to the Ukrainians and the other refugees, from Syria and other places like that… The Afghani refugees who are still in hotels! Well, at least the Ugandan Asians were not here for more than, what, four – five months maximum, you know, and you feel, at least they were on their way.