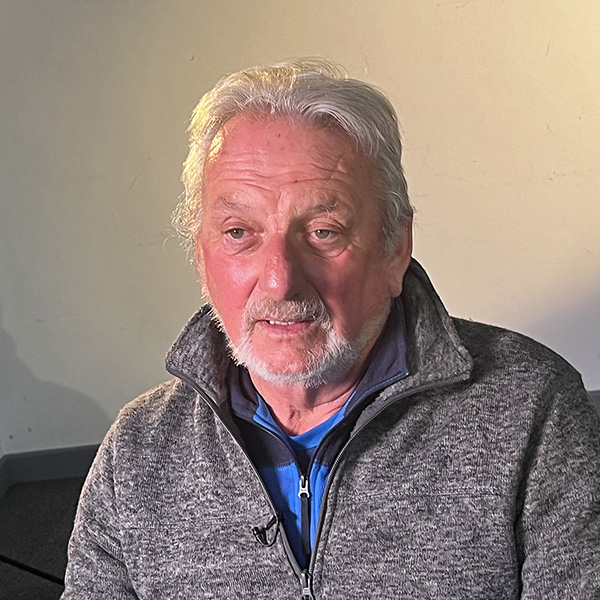 Charlie Bartlett talks about his memories of British Ugandan Asians arriving at the camp in Tonfanau. He recalls playing table tennis with them, making good friends, the ‘culture shock’ for the people of Tywyn seeing non-white people for the first time, but generally accepting them. Other topics mentioned include: the ‘privilege’ of living in the UK; the joy and rewards of giving and volunteering; making people feel welcome; Ukraine; importance of future efforts.

The Ugandan Asians at Tonfanau

00.44 I lived in a house called Brynclwda that was at the back of Tonfanau camp. The house overlooked the camp and when you see the trains pulling over with all the Ugandan Asians. Uhm I went down to the camp to find out if there was anything that I could do to help out. It started off with the- helping people, guide people off the train and down off the platforms towards the camp.

1:14 So that went on for about two or three days and then suddenly -being an avid table tennis player at that time – I was asked if I would get involved with the youth club, which I did. And that was the time of the volunteering which was – it was great fun, but certainly got hammered in table tennis many, many times!

1:45 I used to play for the county tennis, and we used to have a table tennis tables in the leisure centre. We had a new leisure centre. We formed ourselves into a club and we thought we were good, really good. I thought some of the players were excellent. And erm it was three nights a week, playing table tennis.

2:10 The opportunity came, with me thinking that I could teach them how to play table tennis. What I didn’t realise – that they were ten times better than me! Especially some of the players.

2:26 Ahhh…They were absolutely unbelievable! But the laughs we used to have, you know – it was good, absolutely good quality, fun, laughs making everybody… cheer them up – really good, really good.

2:42 I enjoyed doing it, but the memories are…I can’t remember all the names now.

2:49 But there was a lot of people there that knew me by my name and yeah it was nice, walking to the youth club: ‘Hello Charlie!’. And you know, some other lad shouts, ‘Fancy another beating?’ You know, and I just laughed about. We just went and played table tennis. It don’t matter if you win or lose, you had fun – that was-, that was the point of it all.

3:01 And it also made them feel a lot more welcome to the area. That was very important.

How he came to Tywyn

3:18 The camp itself, I know very well, because my father served in the armed forces and he was actually stationed in Tonfanau. Hence that’s when we came here.

3:28 I actually arrived here in 1968. Then started work, after leaving school, started work into the garage trade. I worked as a panel beater and sprayer and did that for near er six years. And then, decided after that to go fishing.

3:59 But the camp itself … was very quiet. It had started to decline, well… the property side of it was going downhill. Then we heard that the camp was going to be used for Ugandan Asians.

4:14 Having been travelled abroad with my father, erm, I wondered what the impact would be for the local communities here.

4:24 But having been involved with all forms of race, people from different countries – it didn’t matter to me. I just went down and tried to help out and it was great fun. And I made a lot of friends while I was there.

4:41 One in particular, I used to take him home for lunch. He was absolutely fantastic and he always said to me, that it was the biggest respect for me to take him into my family.

4:57 It was lovely. My mother was there and it was great. My father had been posted abroad.

5:06 So therefore we had decided that we were gonna settle down in the Tywyn area because we loved it here.

5:12 Tywyn has always been classified as a military town because it had Morfa camp, it had Tonfanau camp, there was a camp at [?]. So therefore, erm.

5:23 So it was absolutely fantastic that this camp got reused again for a very important occasion.

5:34 It gave homes to people, which was the main thing – only temporary homes, but they still had homes – they had somewhere to go.

5:43 I was surprised how many did volunteer to come and help out.

5:48 But when you see people going through hardship, then you suddenly realise that you wouldn’t like to be in that position yourself. So, it’s just a a thing, I think, people do, especially when people are in crisis point.

6:01 Put it this way: I was in a position where I could help people and it’s nice to be able to help people. And er I felt great and when they actually left –  it was some sad goodbyes – because you made some very good friends.

Poignant moments were, to me.

6:23 Basically, how the town accepted them, because it must have been a tremendous culture shock, to see people on the High Street, dressed in their Indian wares. And-

6:46 It was a shock because all of a sudden, you forget how many people there were – but there must have been, what – five six hundred there?

6:58 And all of a sudden, you’ve got Asians in the town. When you consider, in those days there was very little of coloured people or anything like that.

7:14 So the culture shock was big time. Not everybody accepted-, but you know, I was very surprised how everybody accepted it so quickly. That was the main poignant thing to me, is the fact that, ‘Woh!’. We’ve got people here that are used to living in Wales, the Welsh culture and all this sort of thing, and suddenly, all this other culture descends on them –

7:40 But it was fabulous to see how it was all accepted! That was the most poignant thing that I can recall.

7:48 Idi Amin at the time was a tyrant. He was a dictator. Like most dictators, what happens? They start to push their weight around and they bully people.

8:05 So you look back at it and this is why, why I’m glad that I live in the UK. It’s because it is a free and democratic country, without the bullying – except by my wife! [laughs]

8:22 My aim was to try and make people feel welcome. That was the most important thing, because they had gone through a traumatic experience which we have no comprehension of what it’s like to have that done to them.

8:45 But after seeing what we’re seeing at the moment, I look at it and I think to myself, I am not kidding- we are lucky. We are very lucky and very privileged people in the UK. And that’s very important and it should stay that way.

8:59 Well, I am looking at Ukraine at the moment. The Ugandan Asians have gone through similar thing, but not as violent as it is in Ukraine… And I am glad Europe is actually taking in the refugees and welcoming them and giving them homes. They might even be temporary, we don’t know. But at least, they got somewhere to go from the hell that they’re in.

Importance of helping people in need

9:50 Because we don’t know, it might be us one day!  We haven’t got a clue what’s going to happen in the future. So it’s very important that we’ve got people to go to, that help us.