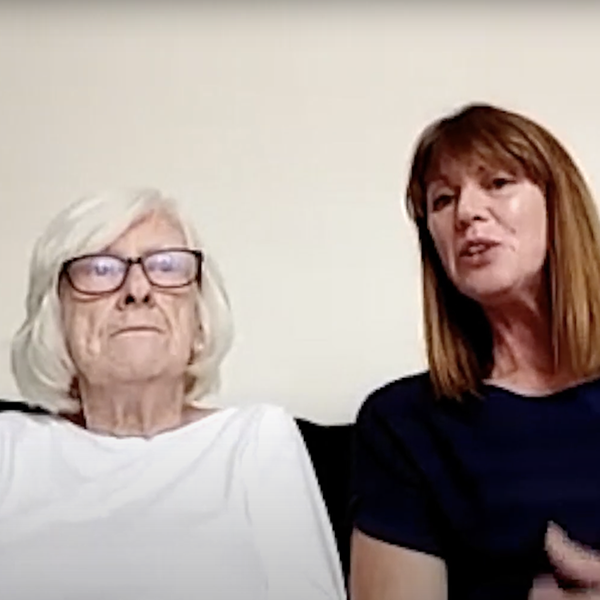 Edith Stephenson recalls working in the office at Tonfanau camp, and her daughter Debbie Mudge, remembers interacting with some of the families staying there. They empathise with how difficult a transition it must have been for the Ugandan Asians. Edith recalls the camp being run ‘efficiently’. They discuss visiting a particular family in the camp; being in ‘awe’ of the different food and clothing is discussed; and how the episode may have affected their future lives and careers. Debbie still thinks about what happened to the friends she made. Parallels are drawn to the Ukrainian refugee crisis.

Impressions of the Ugandan Asians

0:46  ES: I was a civil servant employed in the Inland Revenue at Aberystwyth in the Collecting of Taxes department, and we must have had like, a newspaper or some sort of thing and they were asking for volunteers to go to assist in the resettlement offices, and as I was travelling then daily from Tonfanau to Aberystwyth, so I applied.

You know, it was a big, massive adjustment for them, wasn’t it? For a start it was freezing cold, you know, they were in-, alright they had fire heaters and everything, but it was still cold when they arrived at Tonfanau camp. If we asked somebody to come in to have a word about a job or something like that, and they had to leave a really warm room to battle the winds down to our place, you know. They did it though! But I should imagine it was a very very, it was big adjustment, wasn’t it? Everything – the weather, I would say the food and everything, you know, different – a lot of them spoke very little English so it was hard I think for them, you know? I think it was very hard. But I think they managed, you know. They were always very cheerful.

2:14  DM: Because they wouldn’t have any coats with them, would they?

2:45 ES: There were quite a few houses available in the Rhondda. I took a family there myself. Their daughter was a nurse – had started nursing at Bronglais, well, she was nursing there. I don’t know if she had already been there or whether she was, you know, resettled there after coming to Tonfanau. I can’t remember that bit. But I took them there. We had a bus to take them with whatever possessions they had in Tonfanau, and then I thought it would have been nice for the girl to see where her parents – they were a bit older – to see where they were going to live. So she came with me that day. She had a day off from Bronglais and came down to see her parents settled in this house. We had a-, the family that Debbie met as well was a young couple – he was a printer, yeah a printer in Kampala and he secured employment with a printing company in Ipswich. I remember them going there. The family that he went to, the gentleman that gave him employment. They were very good, you know. They really settled them in and everything. They were very good people. And really helped them. And those are the two families, really, that I do remember more about, you know. It’s been a long time! [laughs]

4:24  ES: But I do remember – don’t we Deb- the first Christmas we did have a Christmas card. But I don’t remember what happened afterwards, you know. I don’t think we ever had any contact with them after that.

4:39  DM: 1972, I would have been four then. I remember going with Mum and my grandmother, my Nain. We went for tea with this family – the family that moved to Ipswich – and it is something that I have never forgotten it. Because I just remember – I don’t remember the rest of the camp but I remember going into their room, I mean I can still picture it now. It was almost like a prison cell really, of what I had seen on the television, you know the programme ‘Porridge’. Just the concrete walls, a little window and then the bunk bed, and the mum that was sitting on the chair in front of us and then the husband standing. To me, as you know, a little child – it just struck me, the concrete surroundings but these almost majestic people standing in front of me. Their dress and everything, I had never seen anything like it. I was really in awe and then they had got like – I don’t know whether it was a crate? Upside down crate as a table, and this beautiful cloth over it and then we were having tea. Well, I’d never seen anybody having tea without milk in it for a start, so that was a big thing [laughs]. And the slices of lemon in a little dish, you know. It was all like completely new to me. It was such an experience. And then the two little girls Kuku and Alpa, who I suppose they were about my age, weren’t they? We were kind of sitting round this crate and I just remember – well I suppose there wouldn’t have been a conversation, but I can just remember us giggling and me drinking this tea with no handles on the cup. It was just like a little bowl. And then, my Nain, my grandmother, she had been given a chair but it just kind of, I just remember the concrete and their presence there was just so, so nice. And I have always remembered them.

7:06  ES: They were always very grateful, you know – whatever was available really. Well they were always, they would come and chat with us in the office and that sort of thing, you know. They liked mixing with us, you know. This young chap from Swansea, he was staying in the camp and he used to meet up with the younger chaps in the evening. They’d make him a curry and that sort of thing, you know. They all mixed in. I remember I was invited one night for the curry. [Laughs]. It was very nice but we didn’t have that a lot in Tywyn then! So it was a bit of an eye-opener. [Laughs] But it was nice. They did feel that they were welcomed, you know.

And of course, I stayed there until the camp closed and then I went to RAF Gaydon with the rest of the families that were left. I stayed there until that closed. And then I was offered to go to London but I didn’t want to –  as Deb was only little. So I was travelling backwards and forwards at the weekends. I think everybody was a bit surprised that it did close, but it was because of the location, really – not because that it wasn’t run efficiently. I think it was, really, because everybody seemed to be very happy and there were a lot of volunteers there.

8:40  DM: Kuku and Alpa – I have often wondered, you know, what they did, you know, and if they remembered me. It was a special occasion for us because, you know, we didn’t have much, did we Mum, and we didn’t really go places. My Nain had put her best dress on to go, [laughs] probably her only dress. I knew it was something special when Nain had this dress on.  So, you know, it was an occasion. And also, you know, something a bit different.

Somebody that I was in school with in Tywyn – you know we’re all in touch on Facebook and everything – last year he was on holiday abroad in Madeira, I believe it was last year. And him and his wife had made friends with people there and it turned out that one of the ladies had been a child refugee at Tonfanau camp, and has very, very, fond memories of being here. And it was lovely to hear that and to actually see they had their photograph taken together, it was so nice. You know, because we’re all very fond of the area, and it would be horrible if somebody turned round to say, “Oh it was horrible, I hated it there!”.

10:07  ES: In my previous career I had always worked with people erm from different nationalities and I always enjoyed the history of you know, meeting people like that, I enjoyed talking to people, learning their history, their way of life and that sort of thing. So, you know, when I finished at RAF Gaydon, I went back to, you know, being in the Revenue and then I transferred after ten years. I went to the Post Office and that’s what we – Deborah and I – still do now. We have the post office in Tywyn. I retired five years ago. So I don’t know, I suppose, whether it did influence me I don’t know, but I enjoyed my time there.

12:35  DM: My daughter, as it happens, with her university friends, just as things were kind of heating up with the people coming out of Ukraine, her and her friends had gone to Krakow for the weekend. Where the flat where they were staying, had already got refugees in the bottom in the basement. And Maisie said to me, she said, ‘Mum, they were obviously affluent people but they didn’t have anything.’ And I thought, well that’s how I remember, when the time when I had gone to Tonfanau, you know, it’s the same, that these people who looked so grand were in this concrete room.

11:49  ES: They had, you know, they’d had to give up so much, hadn’t they? Well, most of them, the majority of them were really well educated and had had you know fantastic positions in Uganda and they were, they had nothing. You know, it was quite traumatic, wasn’t it?