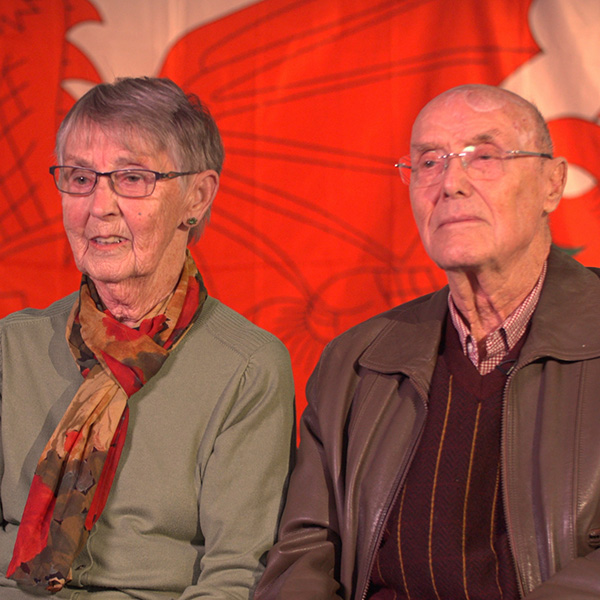 Gerald Stevens and Gwenn Stevens recall their memories of the Ugandan Asians arriving at Tonfanau camp. Gwen volunteered as a nurse at Tonfanau, and her husband Gerald gave Ugandan Asians work experience in their hotel. Topics discussed include: shock of the weather; medical care given; gratitude and treasured gifts given; and class differences.

Arrival of Ugandan Asians in Tonfanau

0:45 Gerald Stevens (Gerald S): When they arrived, they must have wondered where they were coming to, as we already know, Tonfanau is a long way away from anywhere!

0:56  The poor things, when they came from off the train and from off the buses – that had brought them from London… They were very bedraggled and very tired, and… frightened, I would put, some of them were frightened as to wondered where they landed.

1:11 The government made an appeal for volunteers and-, and looking at the situation, you couldn’t help but not-, want to volunteer – do something. It’s like the present day.

1:23 Gwen Stevens (Gwen S): If you had a heart at all you wanted to do something after seeing them all coming off the train, the little children, the parents trying to pull them along, and getting off in the dark and cold – it was raining.

Gerald S: It was raining [nods].

Gwen S: Cold and miserable and it rained as well and of course into a dark station. And the fact that the soldiers were there was was-. It that really – I’m sure that would finish me off, you know, to come -, to somebody in uniform. But there were lots of people directing them straight into the hangar, for hot drinks and food and welcoming, and obviously they were speaking to them and telling them what to expect and taking them to the cabins. I had nothing to do with that, but that was-, they were taken in for food and drink; and they were sort of happy with that.

2:11 Gerald S: I wouldn’t say there was a recognised welcoming party, but there were plenty of people offering to help; bring them to- off the train, and take them to their accommodation that had been arranged, uh had been sorted out and brought up to standard that it could be done so quickly. I was part of that party that welcomed them off the train and took them to the various accommodation that had been arranged.

2:48 Gwen S: It must have been a great shock for them all to come this far, after coming through cities in the train and lots of lights and then come to Tonfanau, and no street lighting, no nothing! So it was really, erm, a very, very sad sight.

3:04 Gerald S: I think Idi Amin could see that they were more business-like and more organised and making money out of his country which he wanted for his countrymen. That was the idea of getting rid of the Asians.

3:22 Gwen S: The nurse down the bottom of the road – she was a district nurse – who lived down at the bottom of our road. And she was telling us about it. Now, we thought, wouldn’t it be an good if we-, erm done something about it. So we volunteered – we talked about it in the family and er, I came up to the camp and they were very happy to-

3:45 There was a nurse, Miss Beard from Aberystwyth, actually was there, and already planned and opened up the medical unit. So, I was able to be there for quite a while.

Gerald S: As a volunteer.

4:07  The local GPs were very good. They had seen a lot of people in the very early days, but then after that, we had a permanent doctor, Dr Jim Diamond, who’d come back from India and he was taken on as permanent doctor for this, for the time to cover. We became very good friends with him and his wife …Strangely enough it’s not name you could ever forget, he was Dr Jim Diamond and she was Ruby Diamond.

4:40 Gerald S: We had cold weather and they had come from a hot country! Certainly warmer than Wales in September.

4:49 Gwen S: They become poorly, quite quickly, some of them. But if they wanted extra care they’d come to us, if the district nurse couldn’t look after them or advise them.

4:58 Families come up quite regularly to the medical centre, for various things.

5:05 Gwen S: One, erm, particular gentleman, I know, he was quite elderly… And he wanted false teeth and of course, as I say, there was a lot of volunteers going around the camp and advising them what they were entitled to, or what they wernt’t entiltled to –  or mainly what they were entitled to. And of course, dentalcare and that, came into it, but er… it’s just how… human nature. You know, probably, over the top in some cases, but he wanted dentures and when I looked in his mouth, he hadn’t had dentures for seventy years, you know – no gums. So, it was that type of thing. It was bit harsh at times, you know, saying, ‘You know…  you can’t just do that, so easily.’

6:00 We got to know some of the parents and children who came into the medical unit and I did have a nice gift. In fact two gifts, but I, I can’t remember what the other one was and I don’t have it any more. Must have lost it. But I had a nice erm, well-

Gwen S: [nods] A pendant. It was very basic, but it was very special because…

Gerald S: You still have it.

Gerald S: You still wear it.

Gwen S: I wear it, after all these years. I wear it regularly. And I-, I didn’t put it on today. It’s gold and its handmade from a family that come, used to come up to the medical centre for various-.

Gerald S: And appreciated the care they were given.

Gwen S: Little things. They appreciated how welcome they were made. And this, this family gave me this [holds up pendant] when they were leaving. I do treasure it, yes. And I’ve got it fifty, six-, fifty years now.

7:00 Gwen S: They were wealthy people, a lot of them, and highly educated really, in their own fields. But I think a lot-, well, a lot of professional people, I was told, were taken off in London – doctors and everything else – the professionals taken off in, a lot of them, stopped off in London. Now, obviously there was a need, and they were, they could, cope with them down in there-. Probably more likely to get jobs.

7:28 Gerald S:  We did hear of stories where one family actually were jewellers, and they tossed all their jewellery into the river – because they knew they wouldn’t get it through the customs or the checks that were going about. There was one lady that you remember [nodding towards Gwen], she- she hid her jewellery in her hair! And she was able to get away with it, because they didn’t touch her hair… They actually, you know, may have touched her body or certainly searched her that way, but they didn’t touch her hair. So she kept her- was able to keep her jewellery.

8:33 Our hotel was being gutted really – putting new floors in and electricity – but I did bring in two young lads, they were around about seventeen or eighteen. Back to our hotel. Fed them, obviously, during the day, but they were able to look and see that type of business which they weren’t er, you know, akin to out in Uganda. But, it gave them a day away from the the trauma of the camp and they quite enjoyed that. We got to know them quite well.

9:01 And, I think it was one of those [looking towards Gwen], who may have given you some jewellery?

9:07 Coming up to Christmas, er, we wanted to do something for them.

9:11 They said, ‘can we take them to a pantomime?’ Well a pantomime, the nearest one in those days would be Birmingham! So, we had to explain that the finances that- that we had just wouldn’t stretch to take them. I mean, we were talking quite a few people – hundreds really. We just couldn’t take them to Birmingham to see a pantomime.

9:42 But we did, arrange a party for them at Christmas. And, I recall, putting up bunting, and putting up flags, and different things, to make it more of a party atmosphere. And, that went ahead very well, it was well received.

10:00 They were dispersed fairly quickly. It was only matter of months rather than years.

10:06 We enjoyed helping out at Tonfanau with the camp.