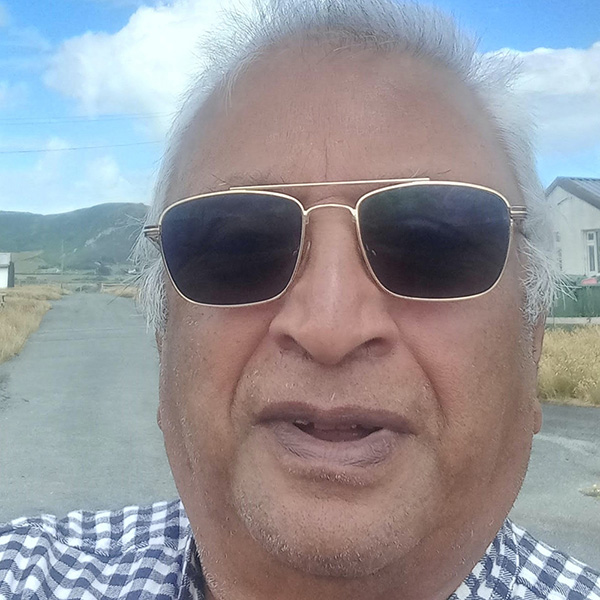 Karim Meghji remembers the fear he experienced as a young boy during the Amin regime, he recalls witnessing violence, dead bodies, his father being abused by the army. He recalls the long process of the passport checks and leaving the country. He recalls his time at Tonfanau fondly, especially the kindness of the Welsh people, and the volunteers, forming friendships. He recalls his childhood being hard, and the difficulties of having elderly parents who couldn’t speak fluent English, however he expresses sentiments of gratitude to the British state and Edward Heath in particular. Other topics discussed include: education; employment; social care; Welsh scenery; British television; neighbours; children; Rugby; Edward Heath.

Fear and bad experiences in Uganda

0:53  I was about eleven or twelve years old at the time. The discussion was quite clear within the families. The fear in the area where I lived, which was called Kiseni and was quite a deprived area anyway, and the issue was that people were worried about army people coming in, and especially worried about the girls in the family being raped and molested and killed. There were a lot of mass killings going on, which were, as you can imagine a twelve year old watching all this. Idi Amin, what I know now is, that he was trying to exterminate Milton Obote, the previous President’s tribe, he was trying to kill all his tribes and you know, watching naked bodies on an open truck, which was horrendous. Also, I used to go fishing in a place called Lake Kabaka on Saturday morning with the rest of the community boys. We’d catch fish. And of course when you went to Lake Kabaka, Kabaka’s Castle, the King’s Castle – Kabaka is King – the Kabaka’s castle was there and we also saw atrocities that were happening there, as children. So the fear was that you were worried to go out of the house. I went to see ‘Diamonds are Forever’ with my Dad and after watching the film we came back, and I started crying because the curfew had started, just started when we were rushing home, and the army person started to slap hell out of my father.

You had to queue outside the British passport office to go in and put in your applications in and all that. So one member of the family queued for the family. It was me who was chosen to go and queue, and then in the morning my Dad and my Grandad would come, I came home and my grandparents would come over and take over, and go in and do the paperwork and you know, get the items sorted. But remember, within that, you had the army walking round all the time, and periodically they picked somebody out and wanted to check their stuff, and ‘What is in your bag? What are you doing here?’. So as a twelve-year-old, you are looking at them, going, ‘Holy Gods! What’s your problem?’ Now I guess it’s ‘What’s your problem?’, but at that time I was petrified.

I was the only child old enough to queue all through the night there, and erm [shakes head] the beatings I took from army there, which affect me today as in…You know, I can fill in a passport form for anybody, yet when I’ve got to fill in my own, I panic. I had a radio which was my pride and joy. Unfortunately it’s not here now. And, that radio would work and every so often the batteries would slow it down, so I would open the back up and rub it and the music would come back on, you know, and I would sit there and keep listening to it. Next thing I know, I had three guns pointing out at me. And I went ‘Woah’ [holding hands up]; ‘What are you hiding in there?’; ‘Take it and have a look’. It’s nothing, there was a eleven, twelve year old child playing with his, and somebody had told the army people that I was trying to hide something in there, and they took my radio apart, nothing, and they gave it back to me. It was an experience that I still remember.

4:37  Late, late evening we got taken to London and the next day then, we were shipped out from London to Tonfanau. I remember three parts of the camp. One was our place. Two was the canteen area, where we all gathered for our meals, which was quite well, you know… They were meals that I could actually relate to rather than, like my grandmother used to say, ‘Boiled food, where is the flavour in this?’ [laughs] So there were flavoured foodstuffs that I could relate to. And [third,] they had a hall, where it was converted for the children to go and play and teenagers to go and socialise, you know, peer group interaction, which was quite good because I spent quite a lot of time down there, getting to know other people, other youths and enjoying my time there, laughing, joking, playing, taking walks to Tywyn to the local shop there, buying bits and pieces and coming back, or going to the railway station and just looking, people watching, and the beach. So I’ve got fond memories of Tonfanau. That’s why I went back, I needed my children to see, ‘Look, this is where Daddy came.’

Although it’s empty now, you know, there were fond memories of it, and the people. I really cannot turn around and thank them enough, to be honest. They were there at the time of need. You know, and there wasn’t this ‘Ahhh’, you know, how do we say, we say ‘becharo’. ‘Becharo’ means the poor person, helping this poor person. There were no feelings of that, it was, ‘Yeah, here it is, if that’s what you want, we will support you.’.

6:32  In Tywyn there was a hospital. I had made friends with one of the local youths there. We used to work in this hospital, so I went with him and we used to have this floor mop. It was fantastic, I learnt how to use the floor mop in hospital, and all that you know, at something like twelve. So, I would have loved to remember his name and kept in touch with him, because he made a lot of difference, because he spoke, he came to Tonfanau, you know he befriended me as a human being rather than a refugee, which was fantastic, you know?

I didn’t grow up with my Dad. I grew up with my grandparents. So my dad went off and-, I’m the Cinderella version, but in male! My Dad remarried, had different children, and he carried on with his life over there. I was raised by my grandparents and adopted by my grandparents. So, you know, you’ve got a rags-to-riches, back to poverty when we came to Britain – absolute poverty – and then I’m quite OK now, thank you very much. Graduation and education has improved my life a lot.

7:58  If you look at Wales, it reminds me, well of home. It is very green, very nice, you know. That’s why I came back to Wales now. I love the fact that I can get off the crazy track and be in the mountains in less than five minutes. And that was Uganda, because I would come out of the house, turn the corner, Kiseni was bordering the jungle. You’d just got straight in the jungle where I’d pick up bananas and nuts. Mind you, watching that the farmer didn’t catch me because if he did, he’d whip my backside!

Because of my confusion and my grandfather’s lack of English, or my grandmother’s – and my sister gone off to Aberyswyth University to study nursing – I was put in a Comprehensive school at that time, and then I got told, ‘Well why are you here, you should be in [indistinct] Grammar.’ I was quite happy sliding in [indistinct ] Comprehensive, you know, and I guess, just worked my way through until sixteen and left.

And then, later on in life, I re-educated myself. But I am one of those, what’s the word… My brother, I have got two half brothers who live in Canada. One is quite staunch anti-British and doing the British down, and me, I call it stupid because where in the world can you go, right, where a country will protect you, house you, feed you, educate you, and give you medical care at source? And I am a prime example of that, because I came to Britain with no education. I left school with no education. I worked in a button factory, worked as a mechanic, became a single dad, raised my children. During that time I met a lovely lady, educated myself with my partner’s support, and became a Child Protection and Social Worker to senior management, and now I am self-employed until last November, and only in November after nearly twelve years of working as a consultant, I’ve now I’ve stepped down, to say [raising hands] ‘Time to rest.’

Only recently I started to get more familiar with my culture. I wasn’t-, I was more Welsh than Asian in all forms. Erm, so that didn’t help, but on the other side one has to say that even now, I am so proud of where I grew up that when I go to universities and when I talk to people about, you know, I always make a point to say ‘I am from the Rhondda Valleys. This is where I am from.’ The people at that time, oh God, they were fantastic, and they still are because my children who are all graduates, they live not far. My daughter lives in Tonypandy. My other daughter lives in [indistinct], and my other daughter lives in Pontypridd, and my other son lives in Blackwood which is in the Caerphilly Valley. So you know, I have now come back, and now I work as a Clinical Family Assessor in Rhondda Cynon Taff.

The one thing that I realise, quite a few families who come here as families and left, moved off, they were placed in Penrhys, and they moved off to Birmingham or Leicester, to be closer to their own communities, and we couldn’t. You know, my Mum and Dad were on welfare state, spoke English very limited, and I thank Playschool for that because when they came they didn’t speak English at all, and Playschool on TV, the round window and that, that is where my grandma learnt to speak broken English! And you know, Aiwen, who was our neighbour, God rest her soul, she had I think a daughter and a son. She was our neighbour, and Selwyn her husband. What with Mrs Bailey down the road [laughs] – I remember these names because they were part of my life – her son was a good friend of mine. We were both goalkeepers in the local team, played rugby. We did all sorts of things, you know, it it it was a fantastic childhood. Hard, very hard, very difficult, but there were good memories as well.

12:59  You know, I say to people, you know, when I thank the British Government at the time, it was Edward Heath, who actually turned around and kept to the promise the British Empire made to my ancestors, that if your descendants ever need us, we will be there. And Edward Heath in ‘72 did that. He actually adhered to that and fetched people here.