BUA50 is proud to announce its partnership with the Mo Amin Foundation in highlighting the Ugandan Asians exodus history through the lens of renowned photographer Mo Amin. Some of the photographs have been included in our mobile exhibition. Here we are offering you a short insight. 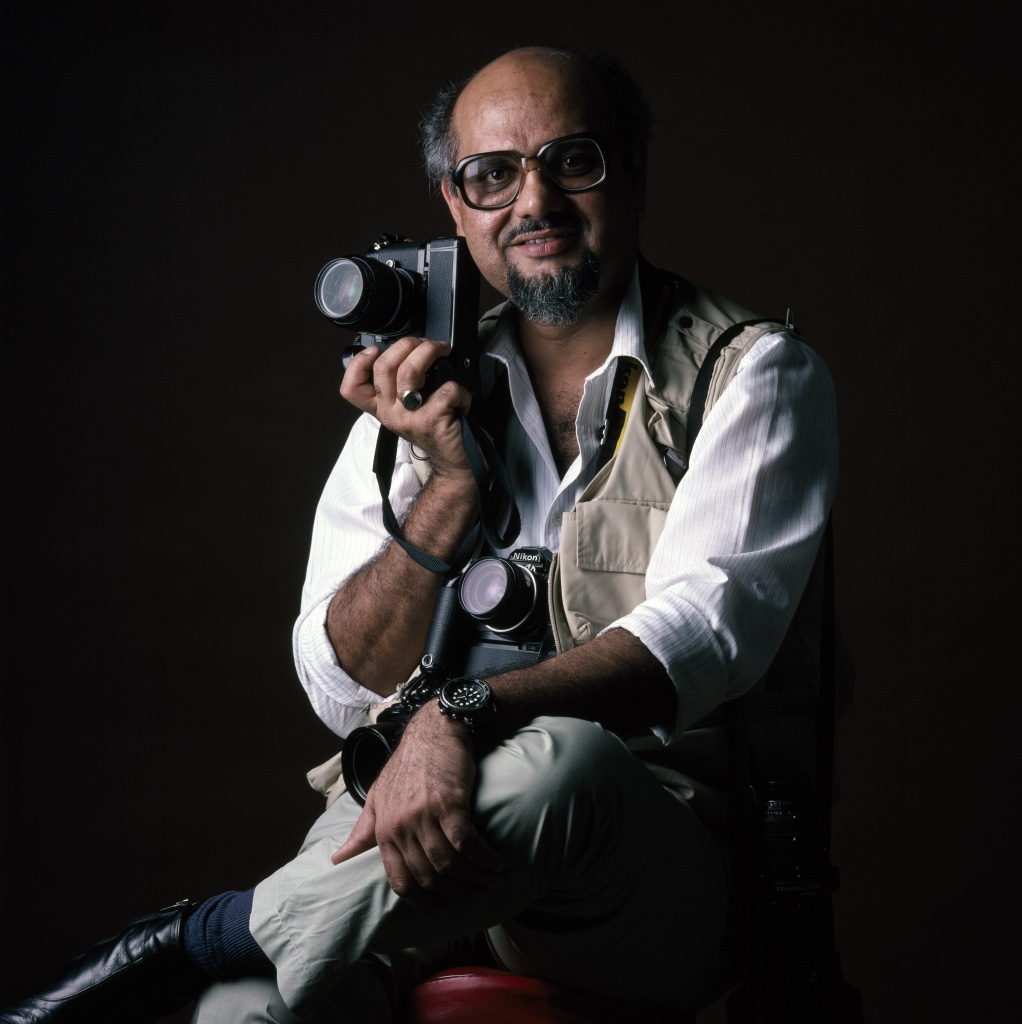 "Many millions are alive today because Mohamed Amin risked his life time and time again.” 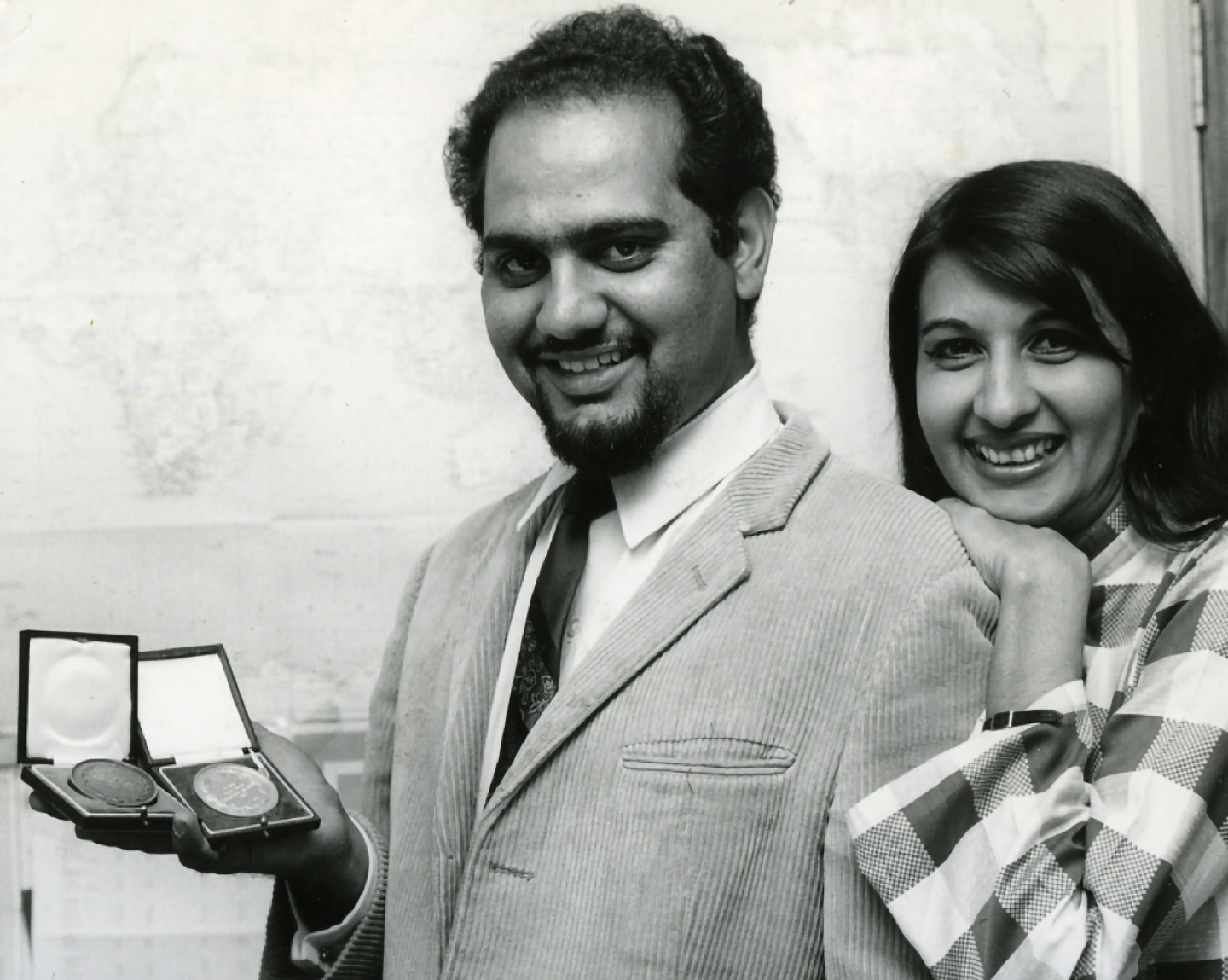 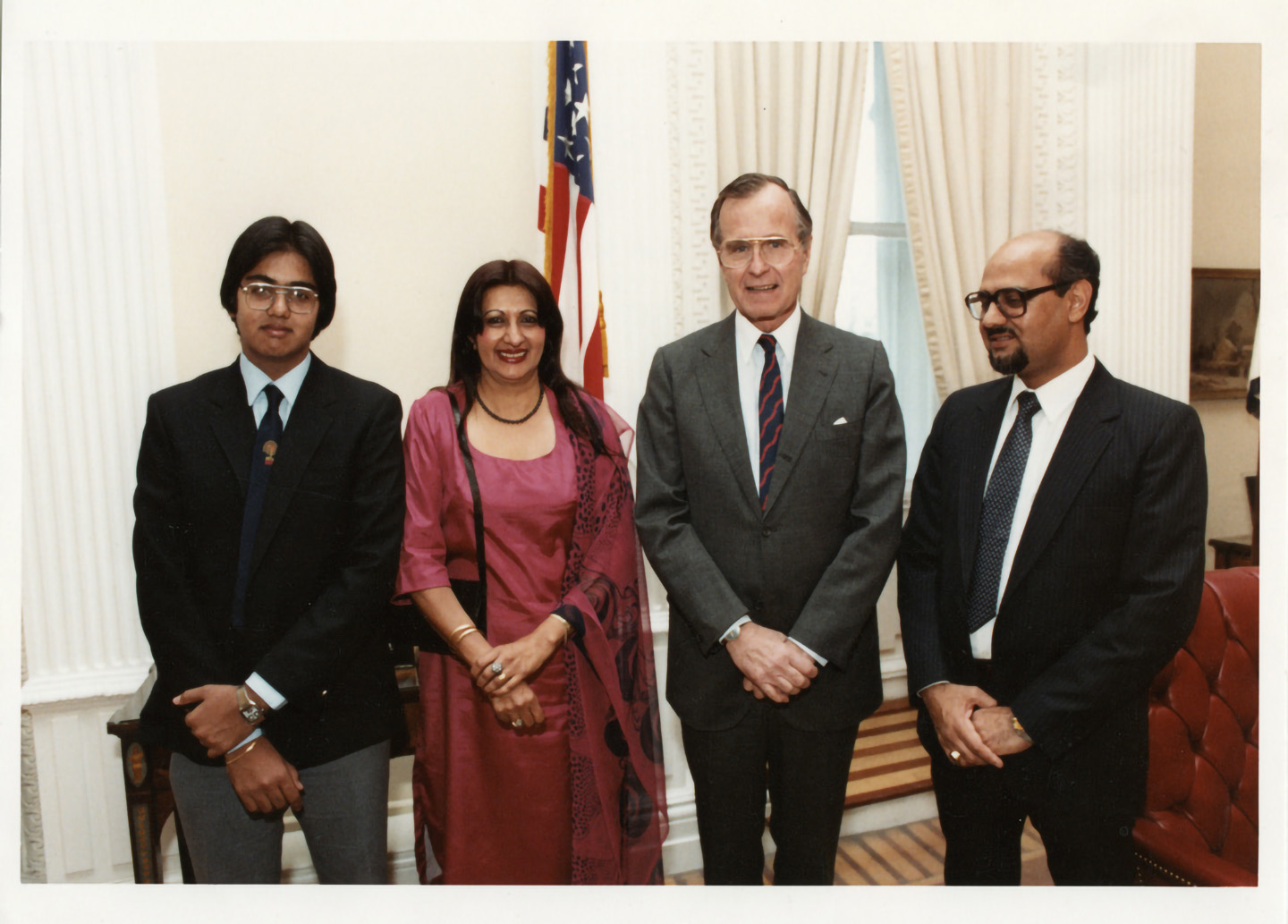 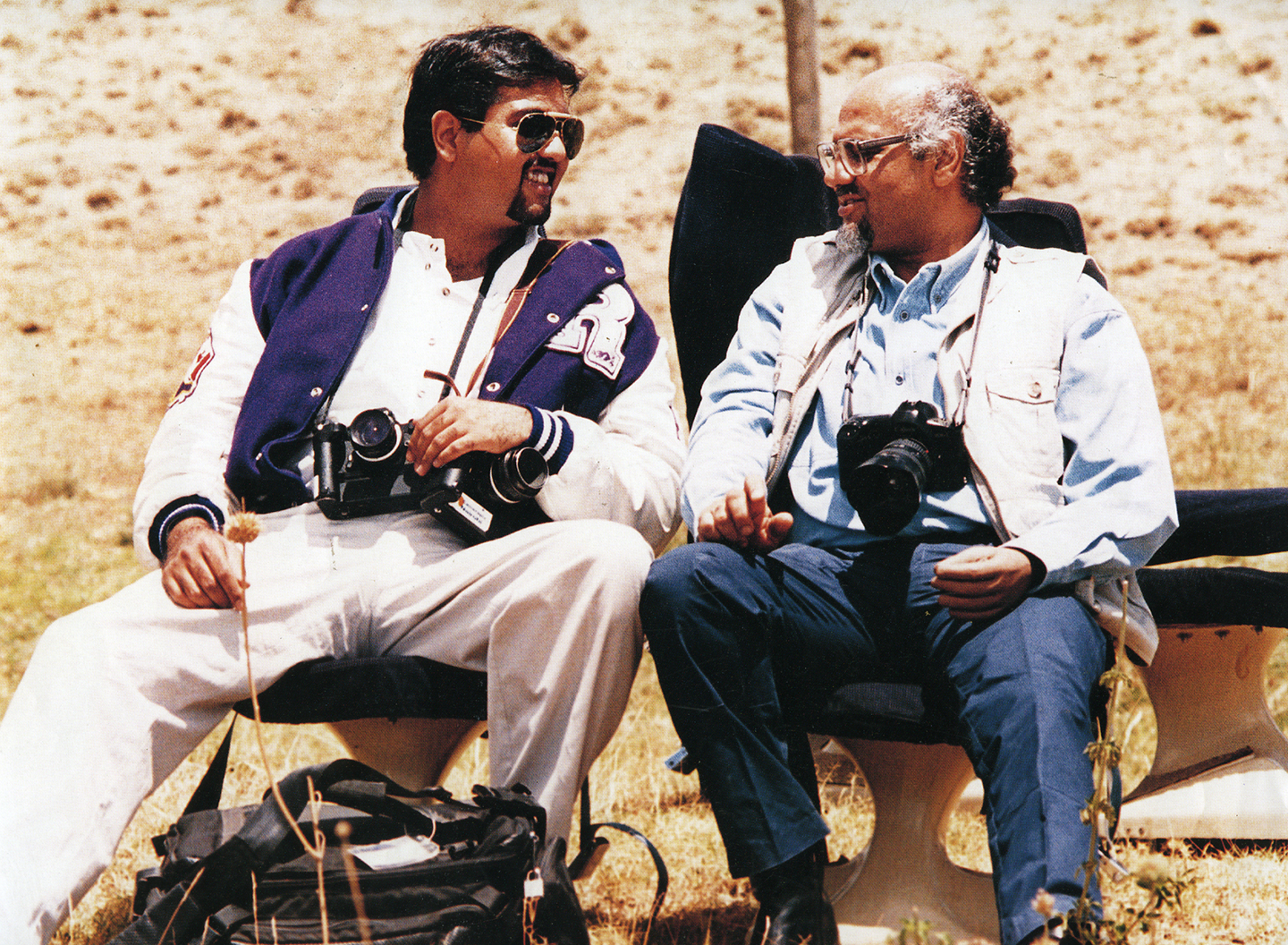 Mohamed Amin, photographer and frontline cameraman extraordinaire, captured the pain and passion of Africa like no other. ‘Mo’ trained his unwavering lens on every aspect of African life, never shying from its tragedy, always rejoicing and celebrating its successes. Mo’s international breakthrough came in 1965 when, at 22-years-old, he set out to cover the revolution in Zanzibar. His pictures of a secret Soviet military training camp got him arrested by the authorities and he was tortured for 28 days in the notorious Kilimamigu prison.

Rising at 2 am every morning and with Camerapix offices in 22 countries, Mo witnessed and recorded the alternating currents of his beloved continent and beyond. Always first, his photographs would delight and shock millions of television viewers and newspaper readers. In 1977 French media had secured exclusive rights to document the coronation of the Emperor of the Central African Republic, Jean-Bedel Bokassa. However, Mo went undercover wearing a top hat and tails, and his photographs were published all over the world.

Mo travelled to Korem in northern Ethiopia on 9 October 1984. He and Michael Buerk filmed and photographed the devastating Ethiopian famine. The story aired across the world and opened the eyes of millions. Mo’s photographs were published in every single newspaper globally. The world saw the brutal reality of the famine. In response, political activist and musician Bob Geldof created the charity group Band Aid and organised the Live Aid concerts to raise money for Ethiopia. Harry Belafonte put together USA for Africa to record the song “We Are The World”, and US President George H.W. Bush pledged $1bn to the famine relief and invited Mo to the White House.

In 1991, Mo lost an arm in an ammunition dump explosion in Ethiopia. His sound recordist, John Maathai was killed while 3 other colleagues were injured. With the help of a myoelectric prosthetic arm, Mo was back in the field only three months later to carry on with his work.

Mo built up strong relationships with world leaders and journalists, which allowed him exclusive access to some of the continent’s greatest stories. He was the only photojournalist allowed into Idi Amin’s Uganda. His Muslim background allowed him to be the first to photograph and film the Hajj in Mecca. But Mo was frustrated by the depressing narrative of Africa that the media transmitted. In 1994, he launched the weekly TV show ‘Africa Journal’, which reported stories on the positive growth of the continent.

Mo was killed in a terrorist attack on 23 November 1996. The Ethiopian Airlines flight 961 was hijacked and crashed into the Indian Ocean killing 125 people including Mo and his colleague, Brian Tetley. Survivors would later report that Mo had tried to talk the hijackers out of their plan. He fought until the end and lost his life in the way he would have liked best – amid the largest scoop of the day.

"God sent you for this hour my son.” 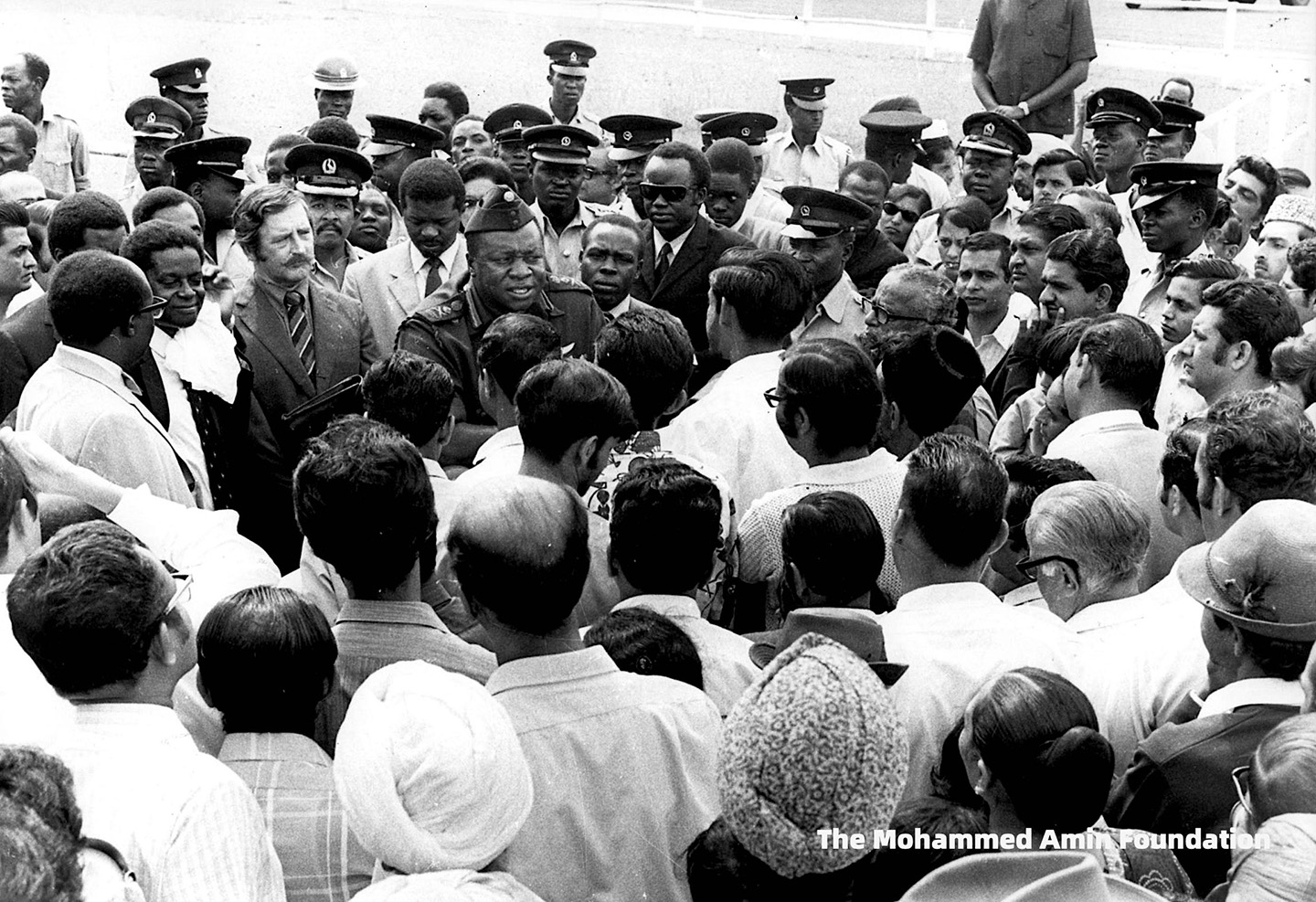 Idi Amin addresses Uganda Asians, giving them 90 days to leave the country. In June 1972, Idi Amin Dada announced that he had been visited in a dream by God, who had issued him with a divine instruction to expel the Asian population from his country. “Asians came to Uganda to build the railway. The railway is finished. They must leave now,” he said at a press conference, giving them 90 days to leave. 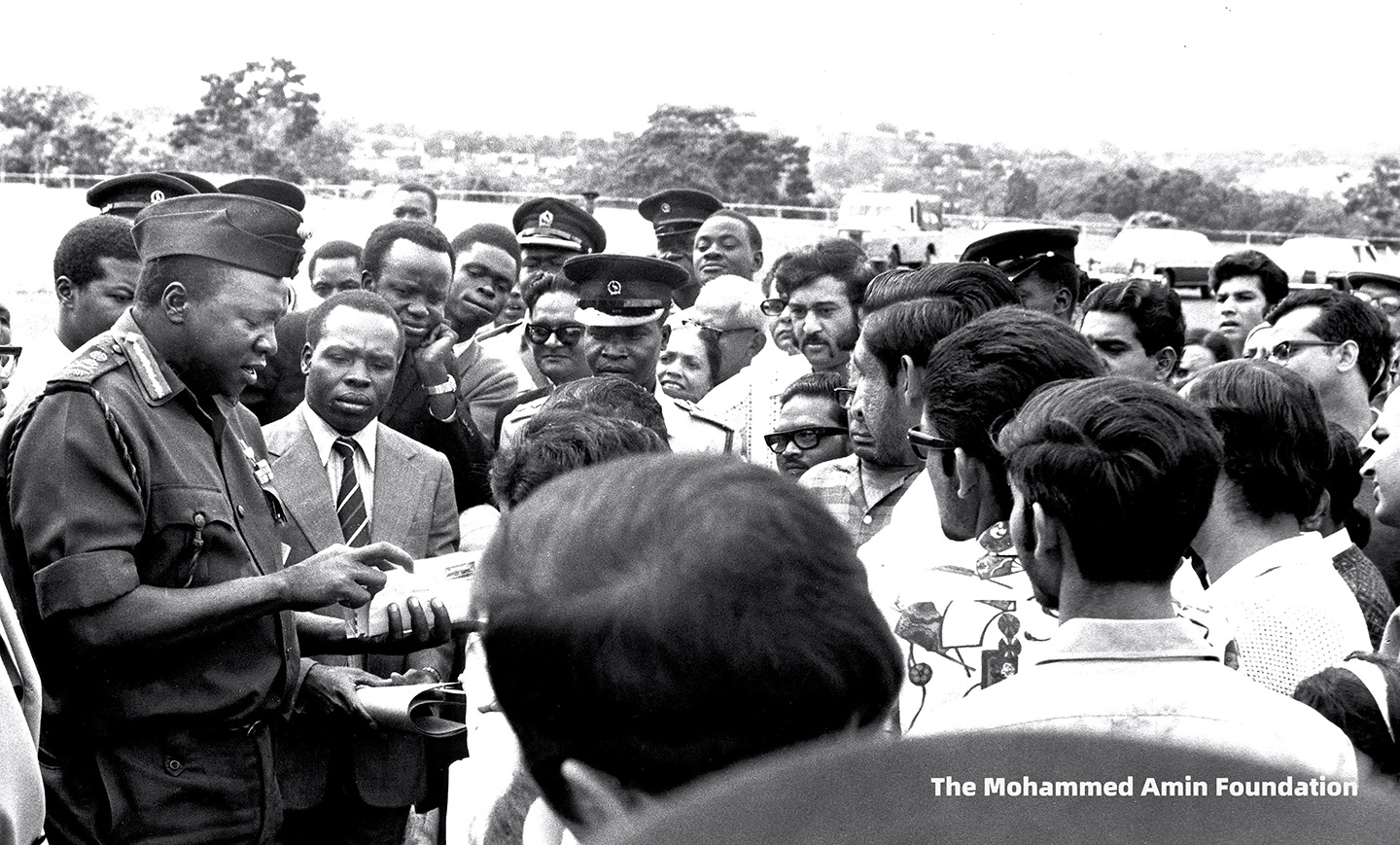 Uganda’s President Idi Amin Dada addressing Ugandan Asians. He shows them envelopes containing money alleged to have been sent by Asians as a means of smuggling cash out of the country. 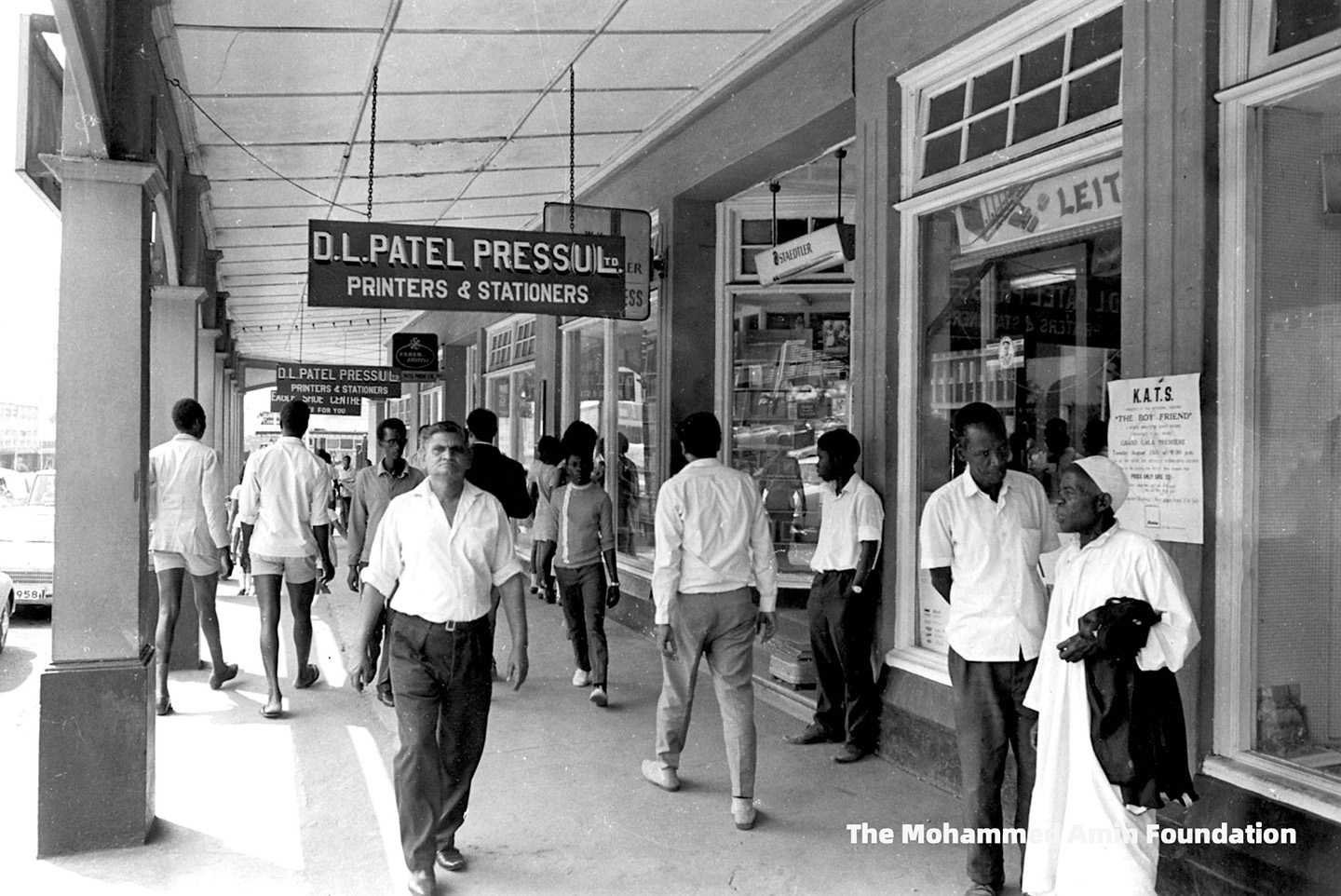 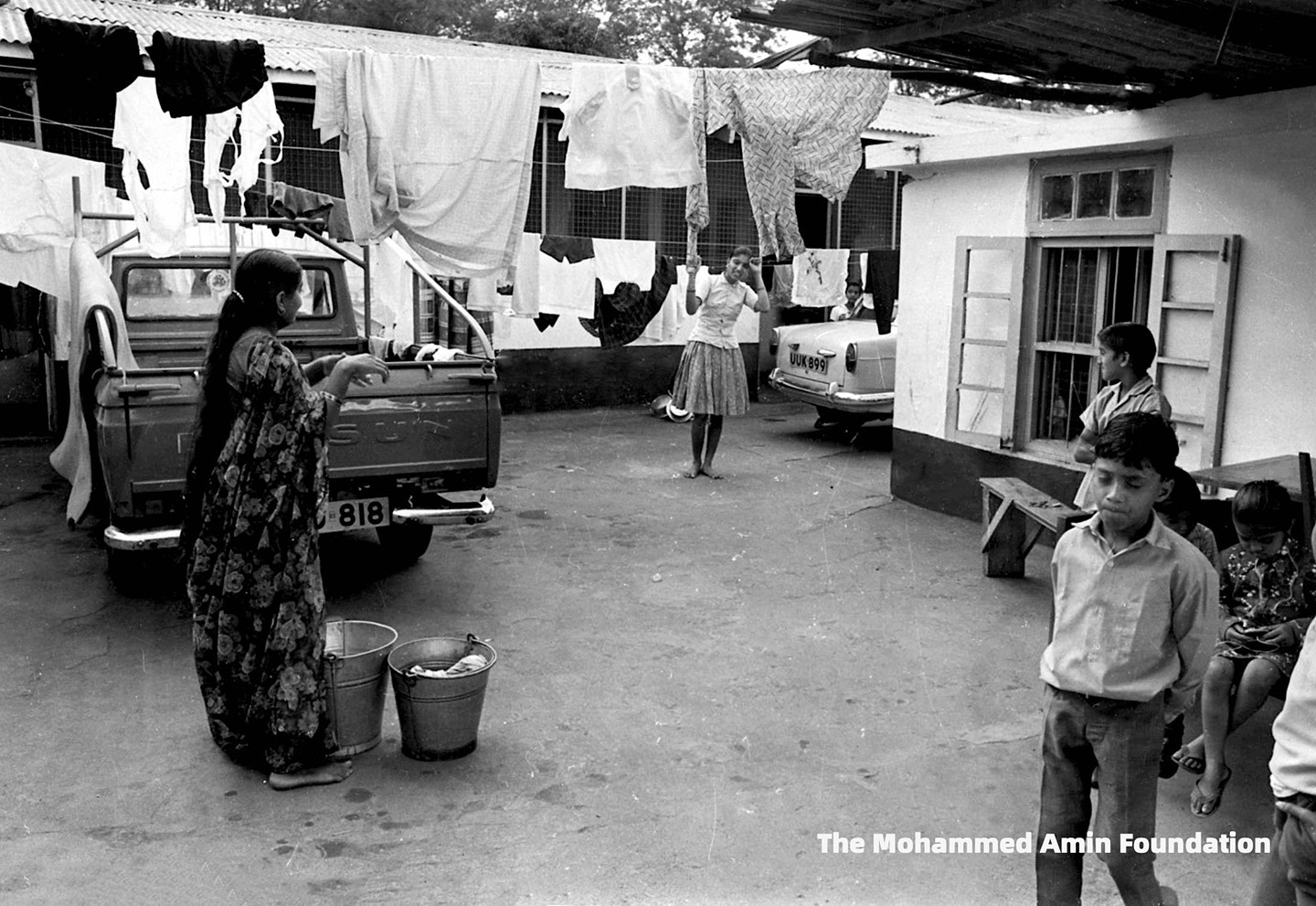 A courtyard of an Asian household in Kampala, Uganda 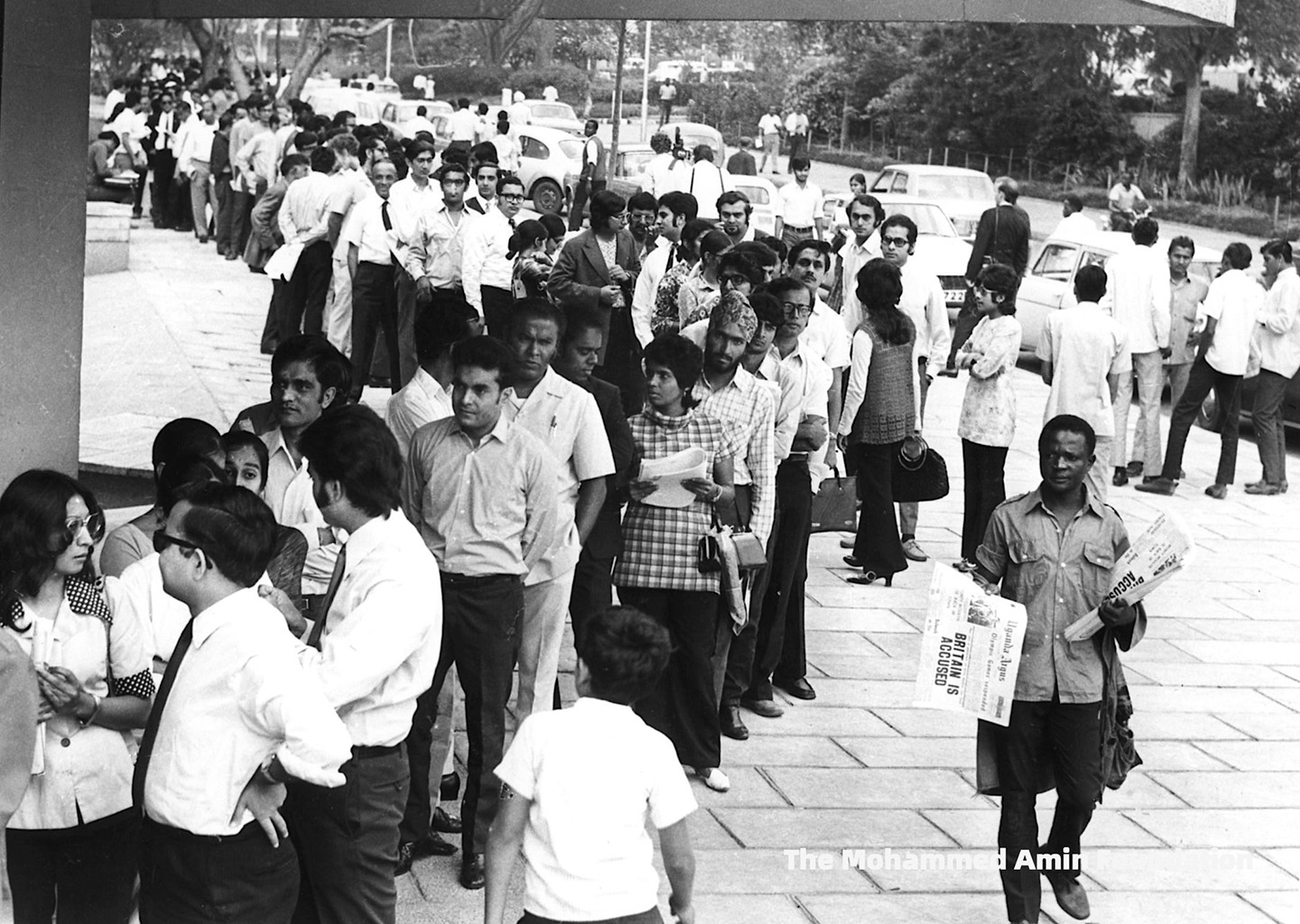 Ugandan Asians queue for documentation and clearances to leave Uganda before the 90 Day deadline. 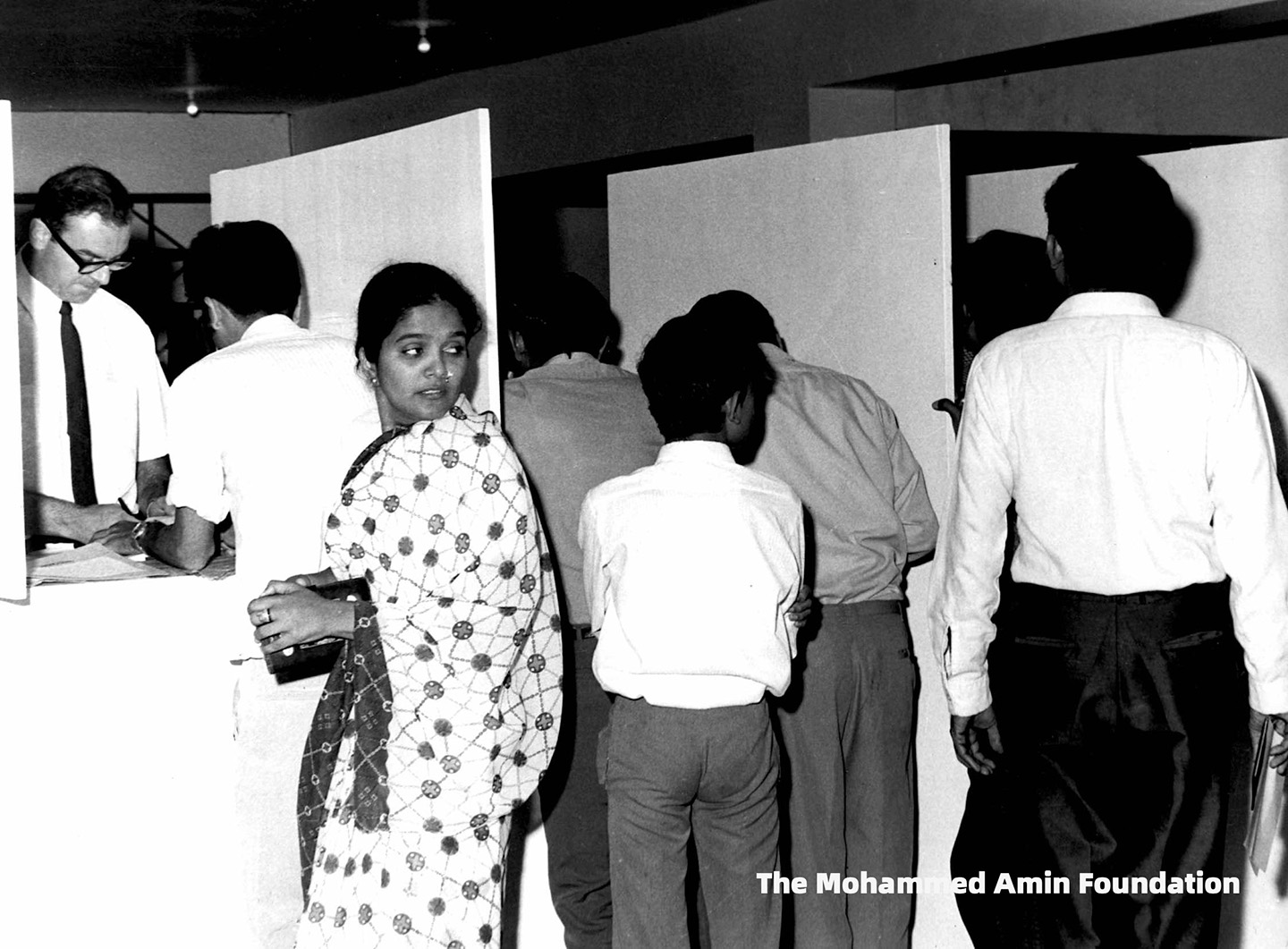 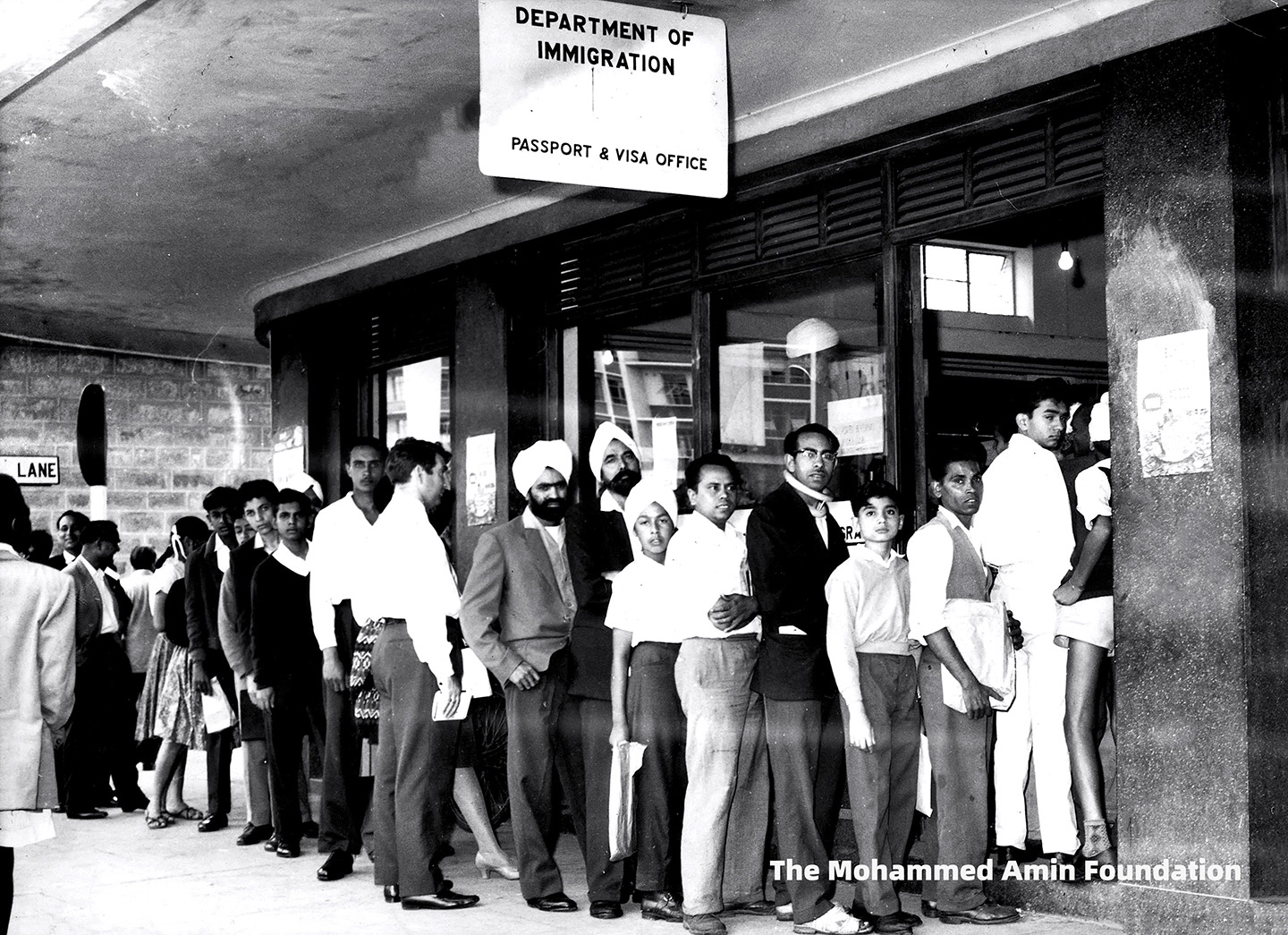 Asians queue up at the Immigration office, following orders from General Idi Amin to leave Uganda in 90 days. 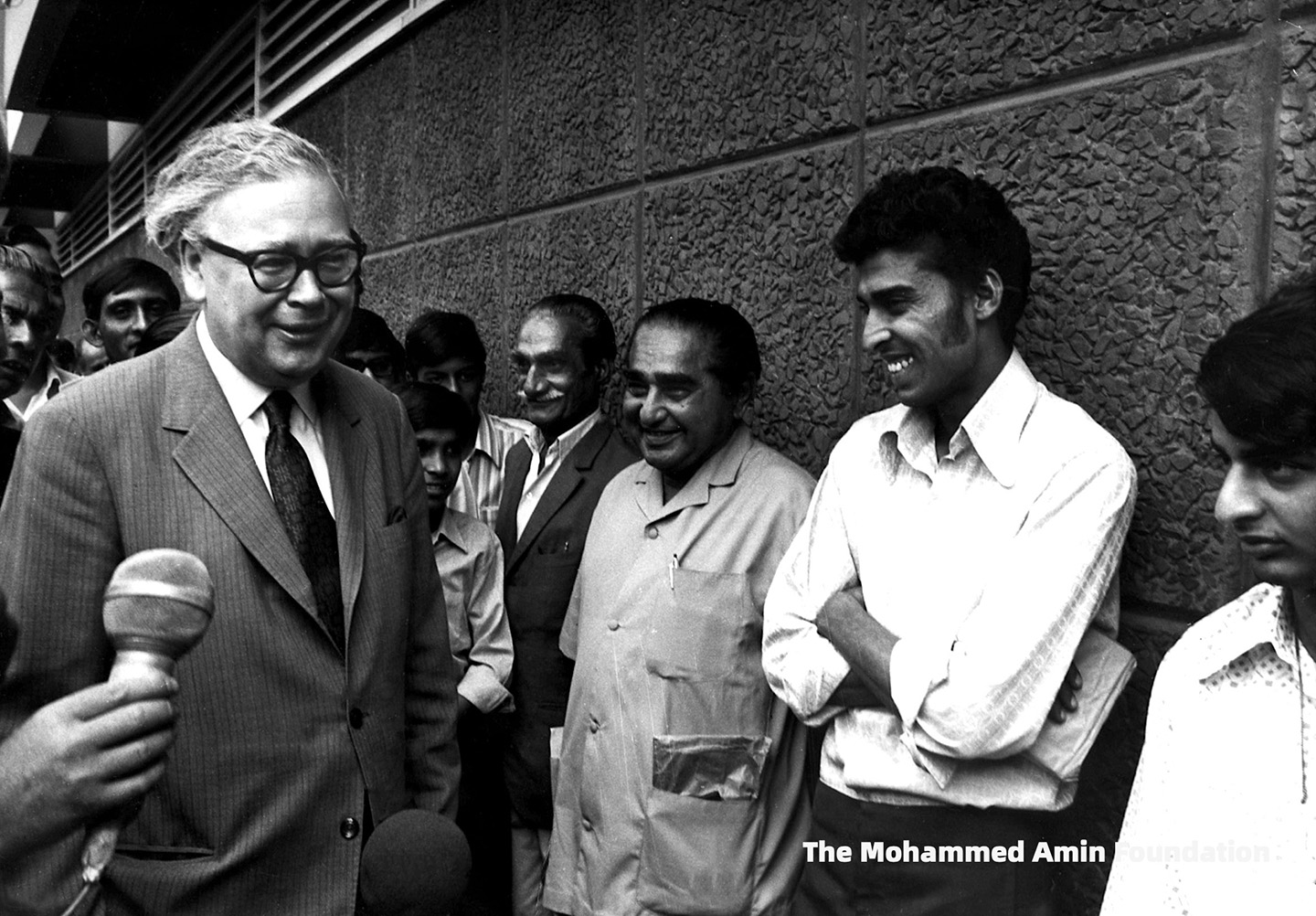 Special British envoy, Mr. Geoffrey Rippon, in Kampala met Asians who were queuing up for help outside the British High Commission. 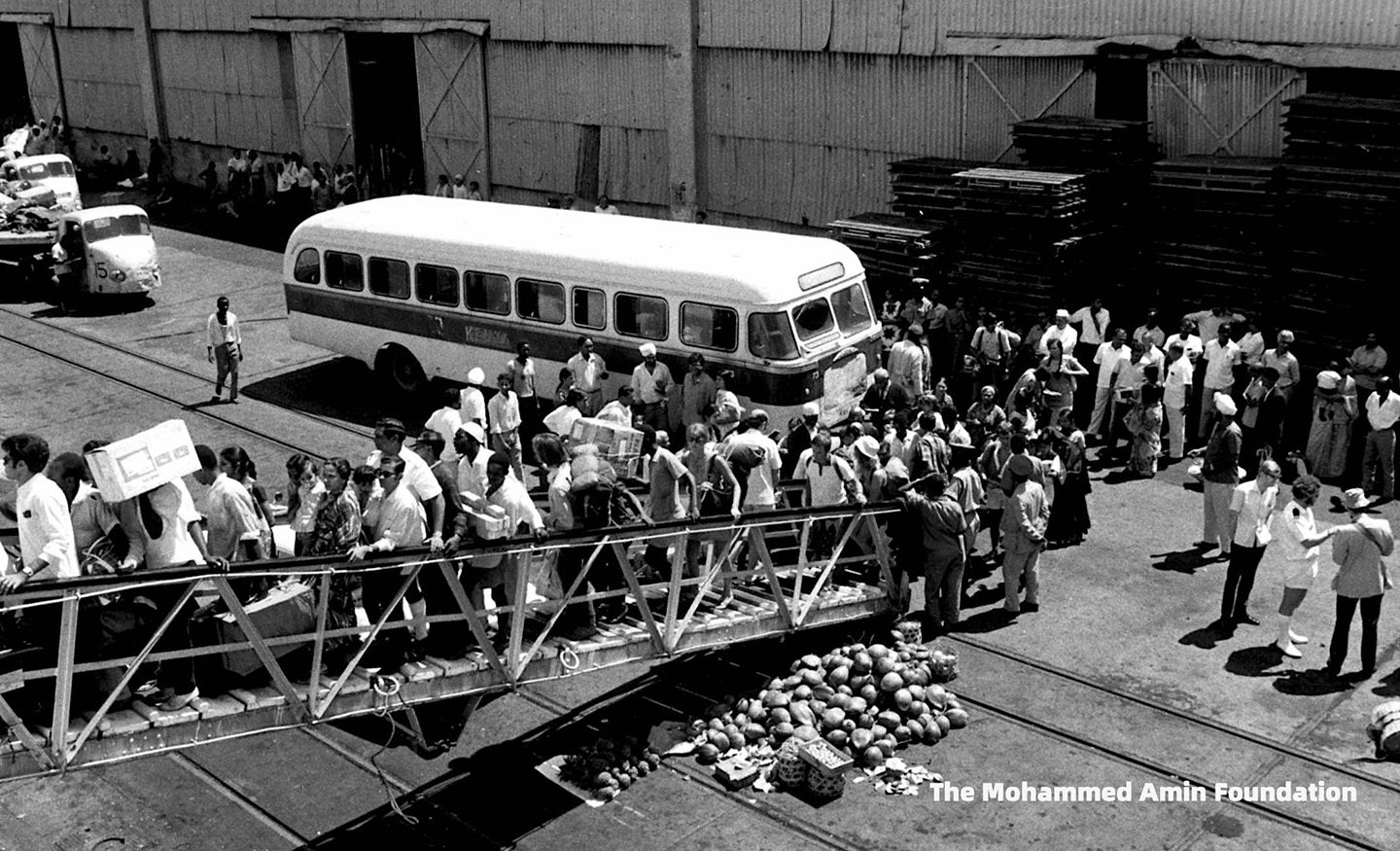 Asian passengers aboard the SS Karanja ship on its way to Mombasa, after having been expelled from Uganda in 1972. 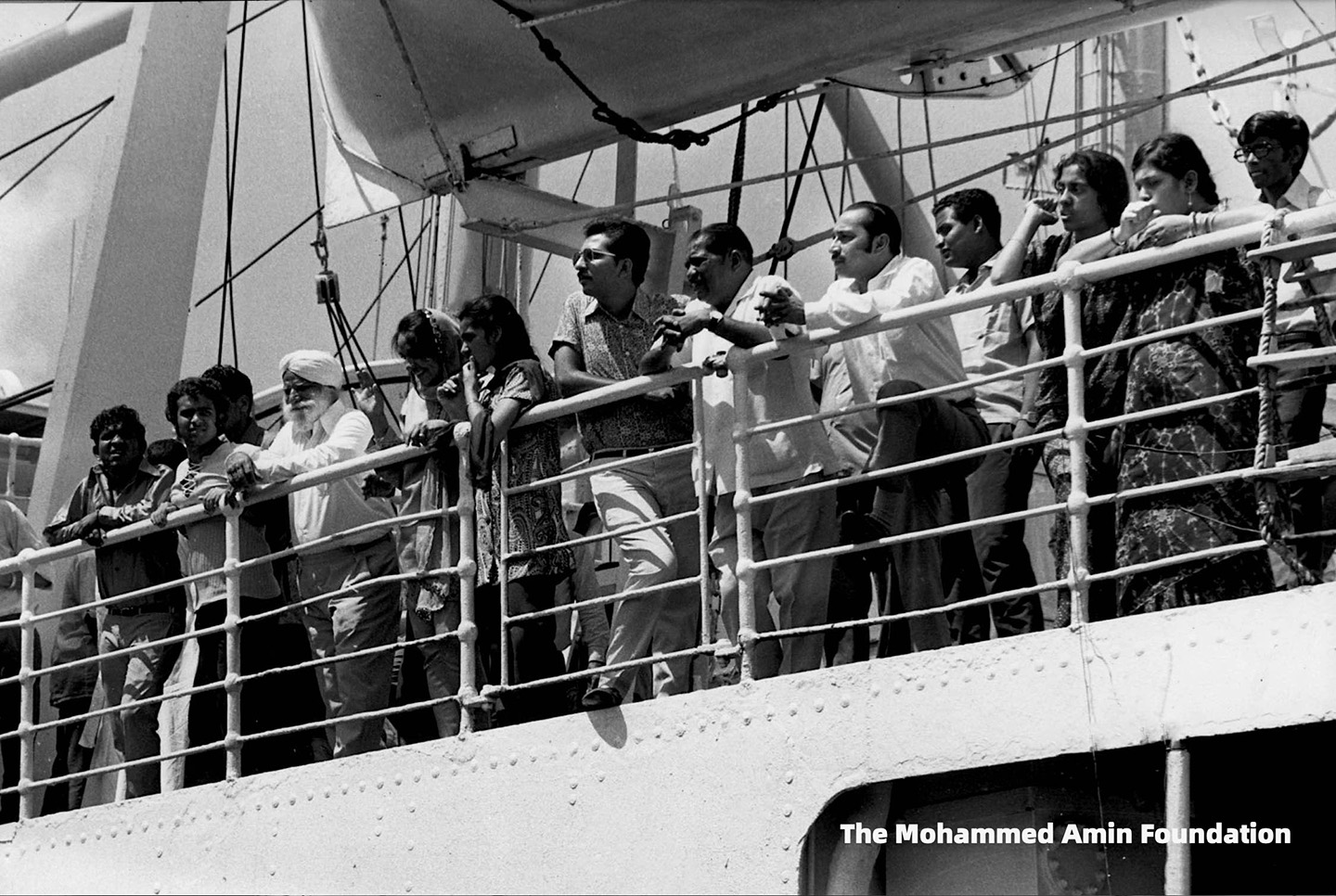 Asian passengers on the SS Karanja ship, after having been expelled from Uganda, take a last look at East Africa. 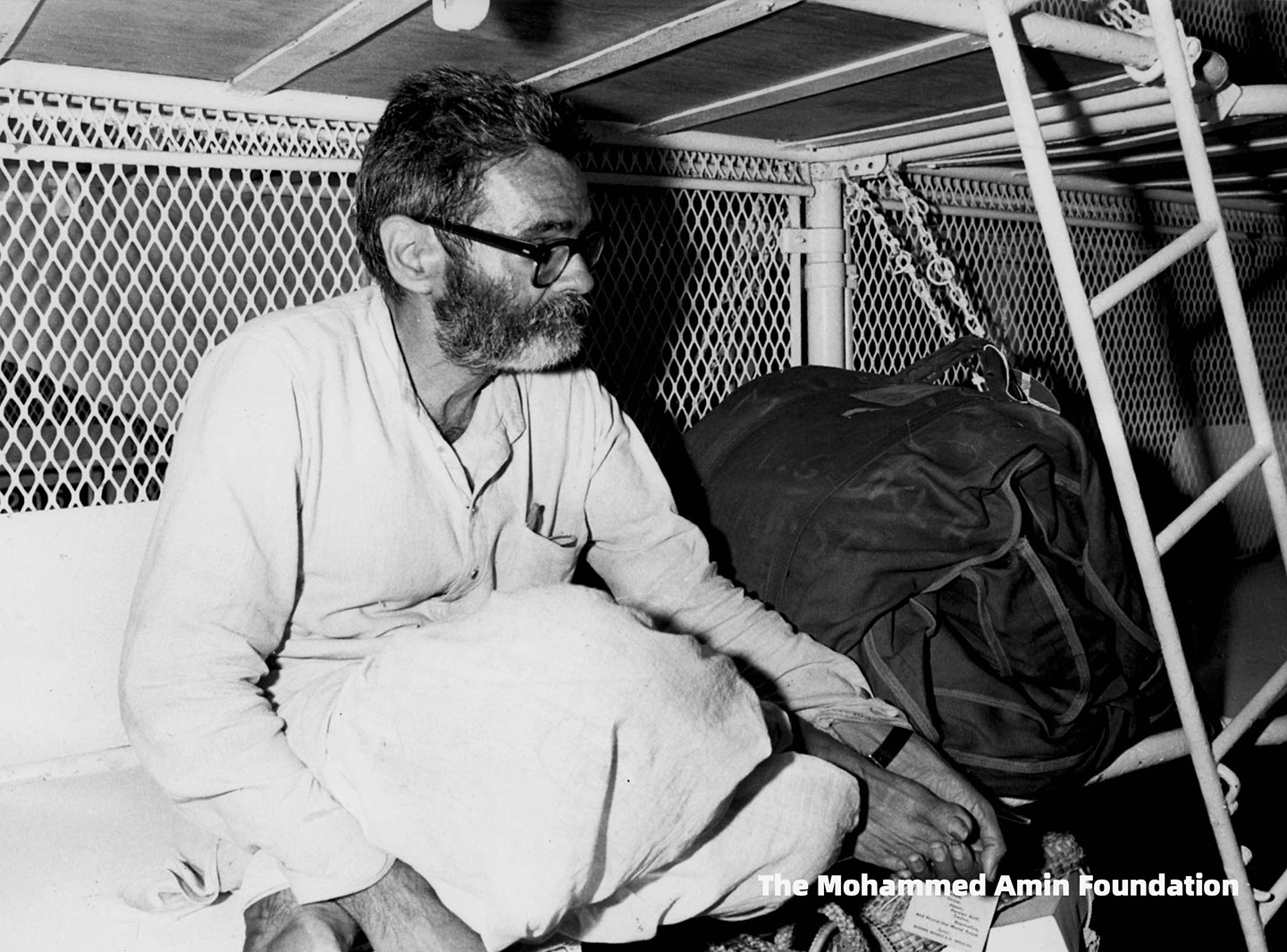 A man with little space for his journey on SS Karanja Ship in 1972. 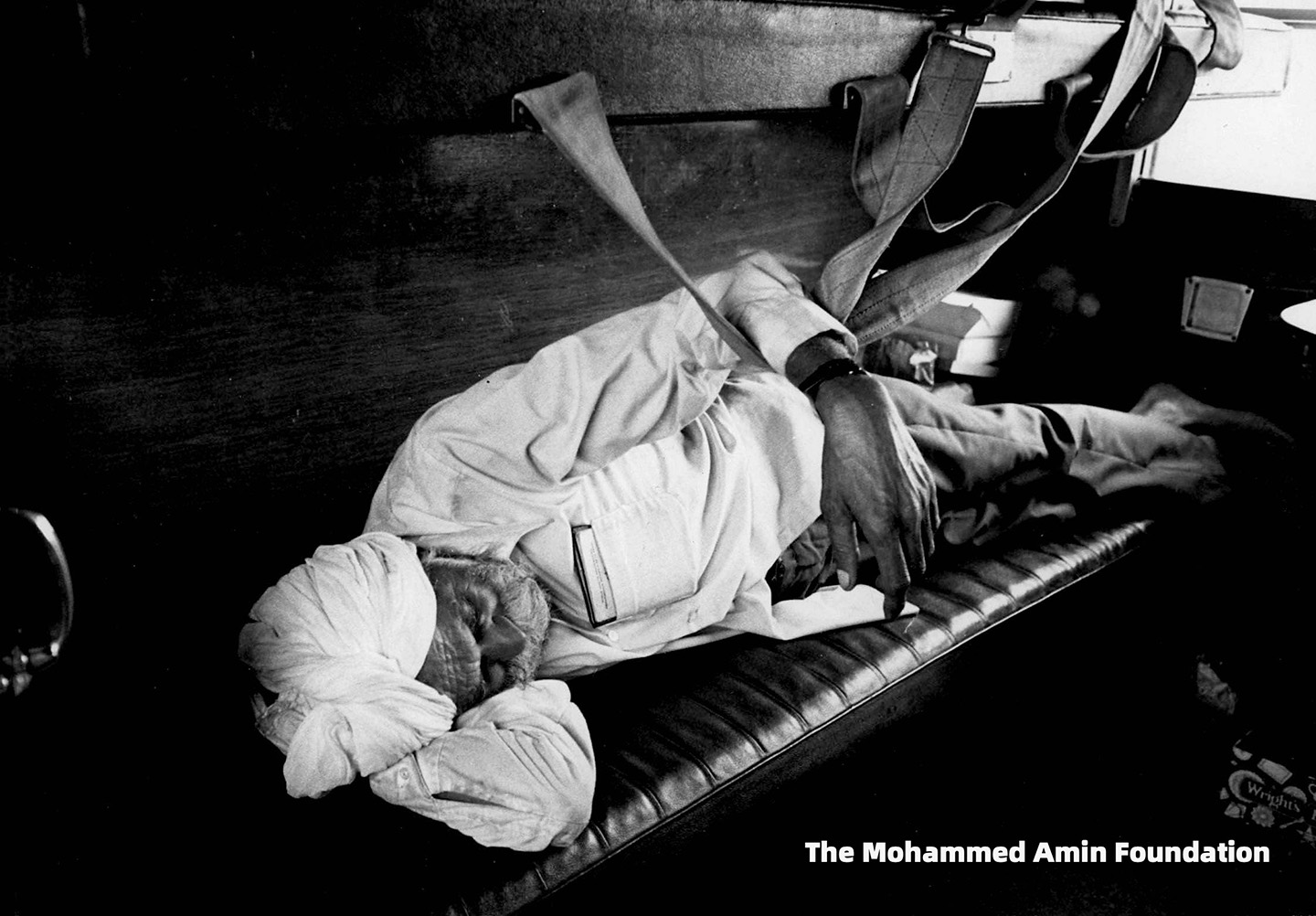 An old man falls into a sleep of sheer exhaustion. 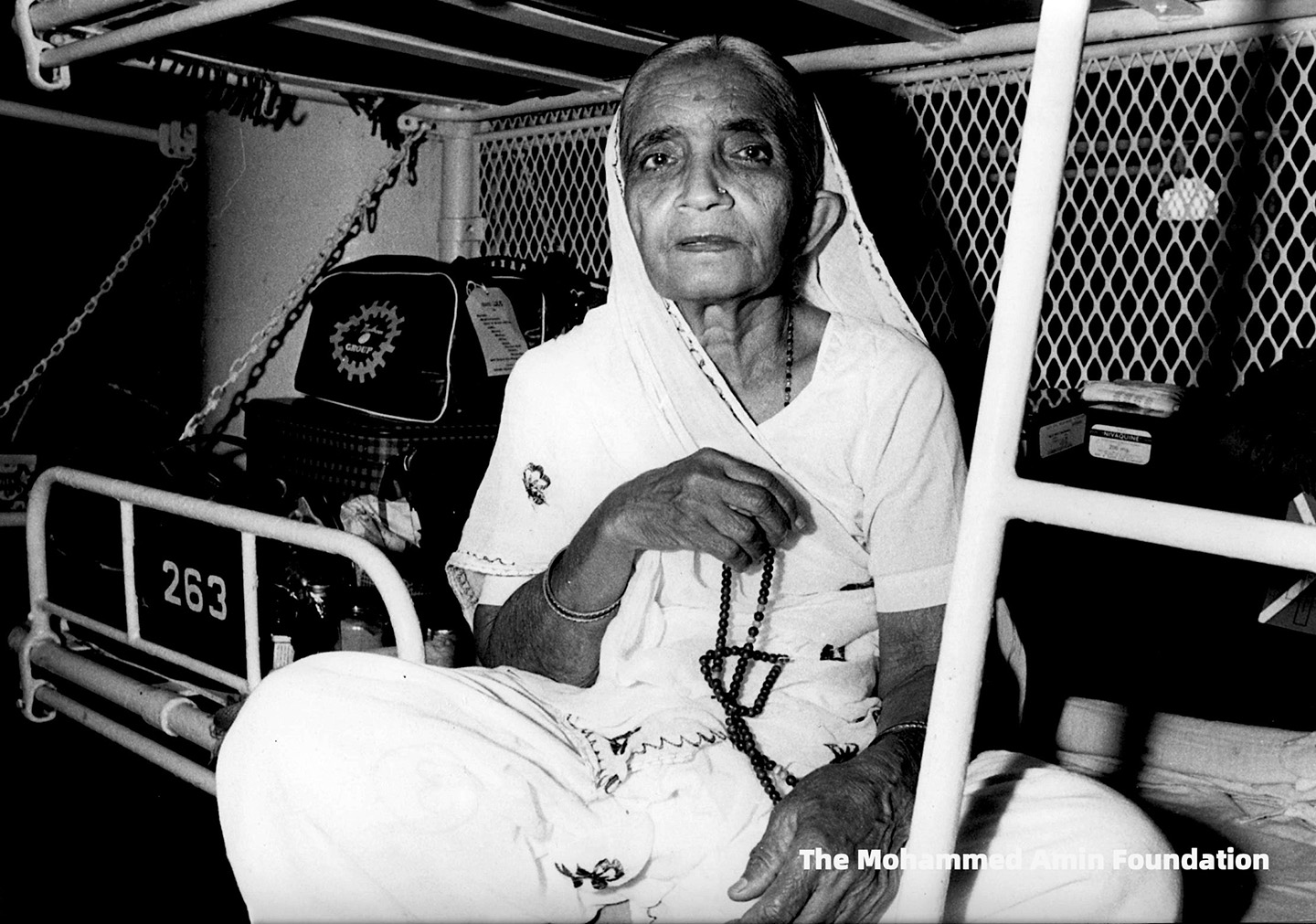 An old woman is puzzled but resigned. She is too old to resist the blows of fate. Uganda Asian’s expelled from Uganda by General Idi Amin. 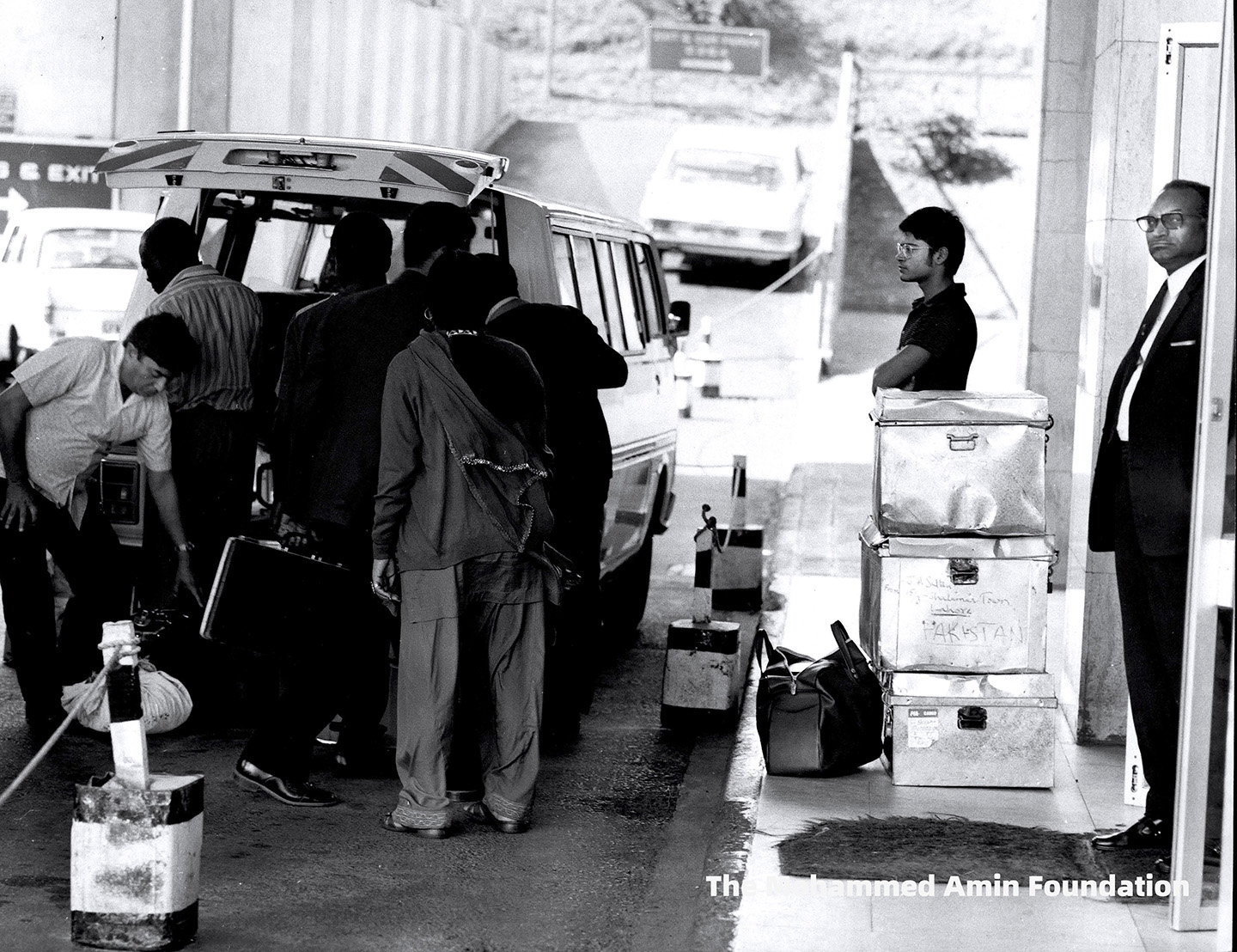 Ugandan Asians packing and leaving for railway stations and airports. 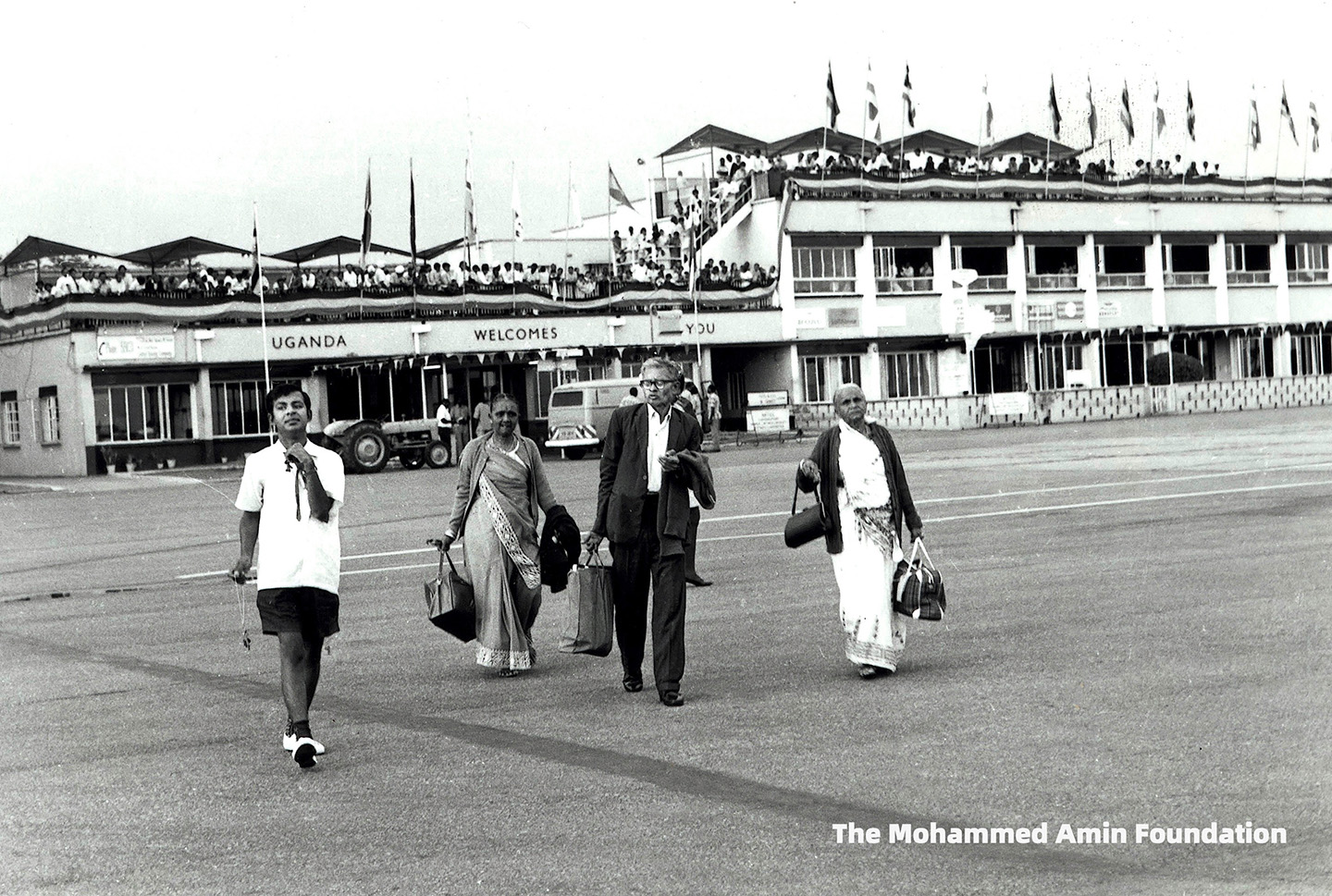 An Asian family at the airport in Kampala, departing Uganda. 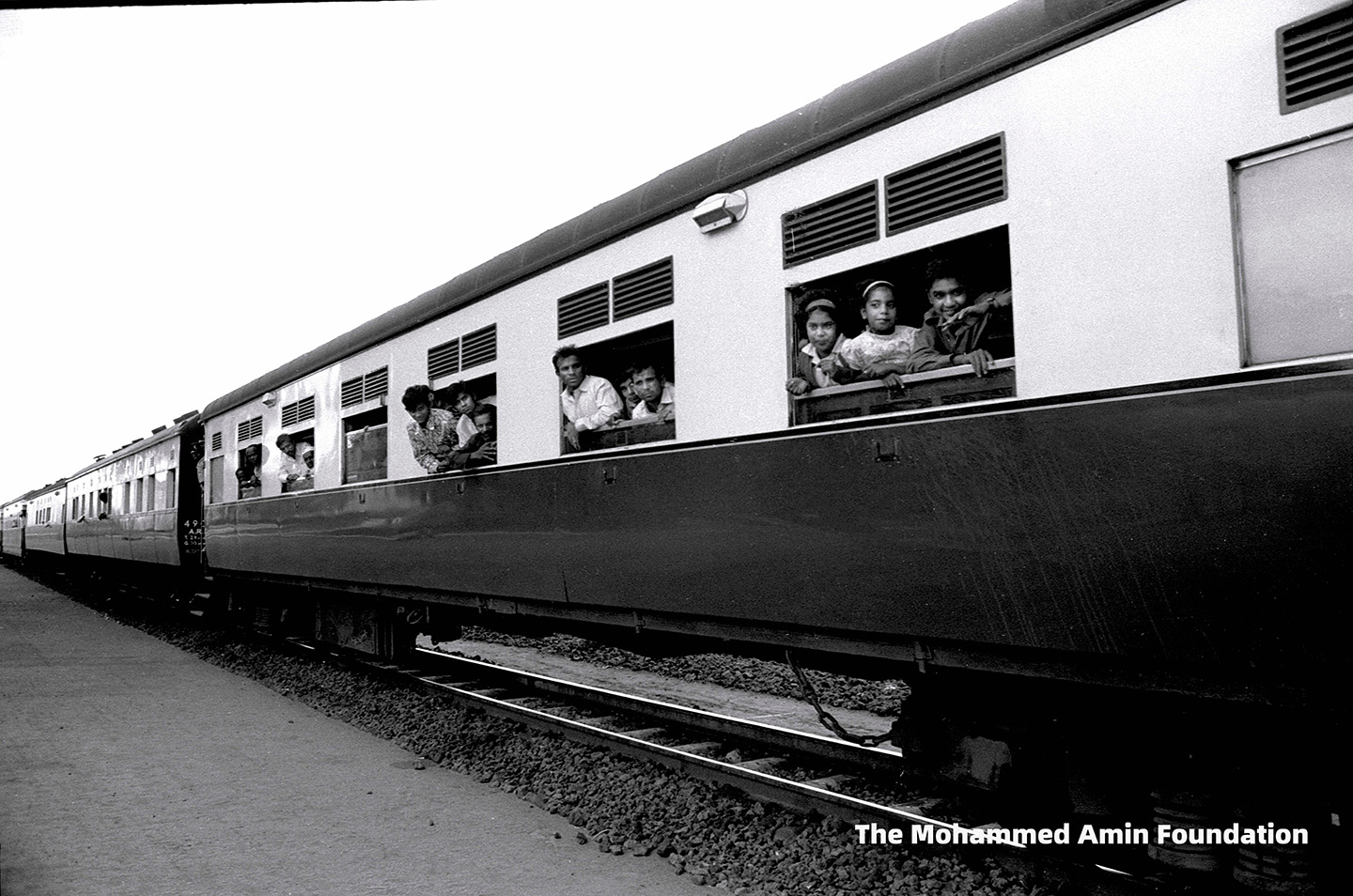 Ugandan Asians saying farewell as trains leave out of the country. 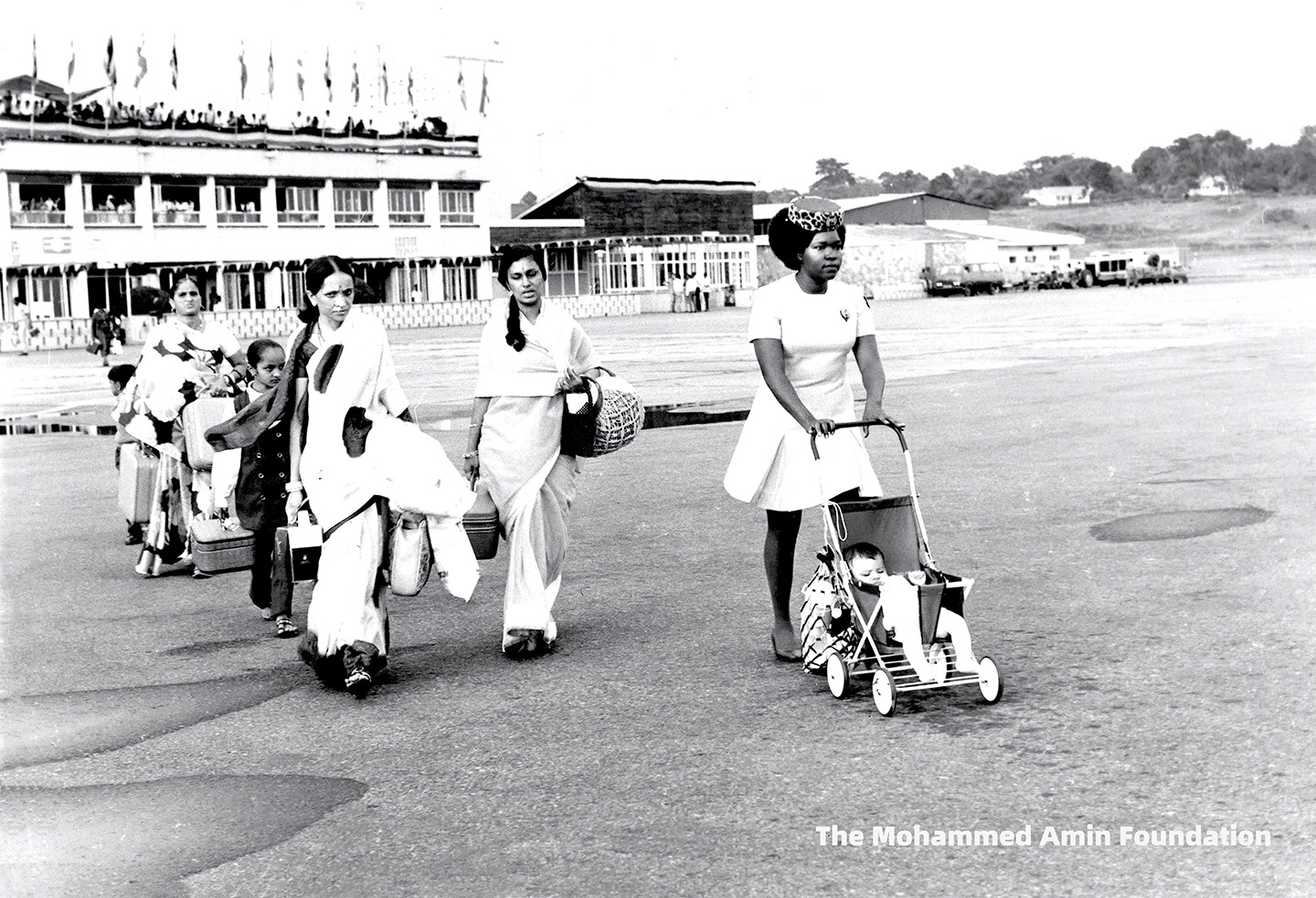 Departing via the airport after a horrific journey on the way to the airport. 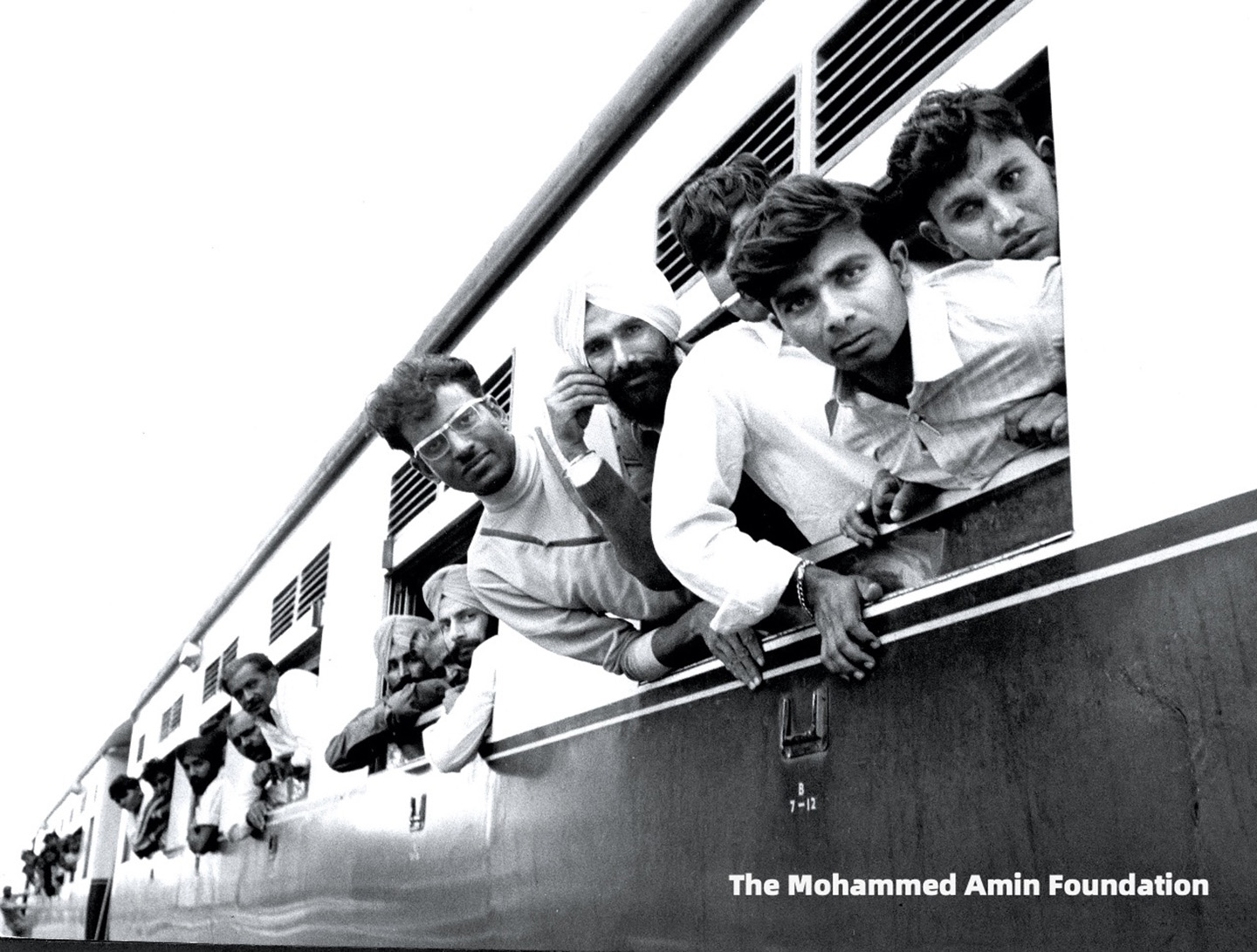 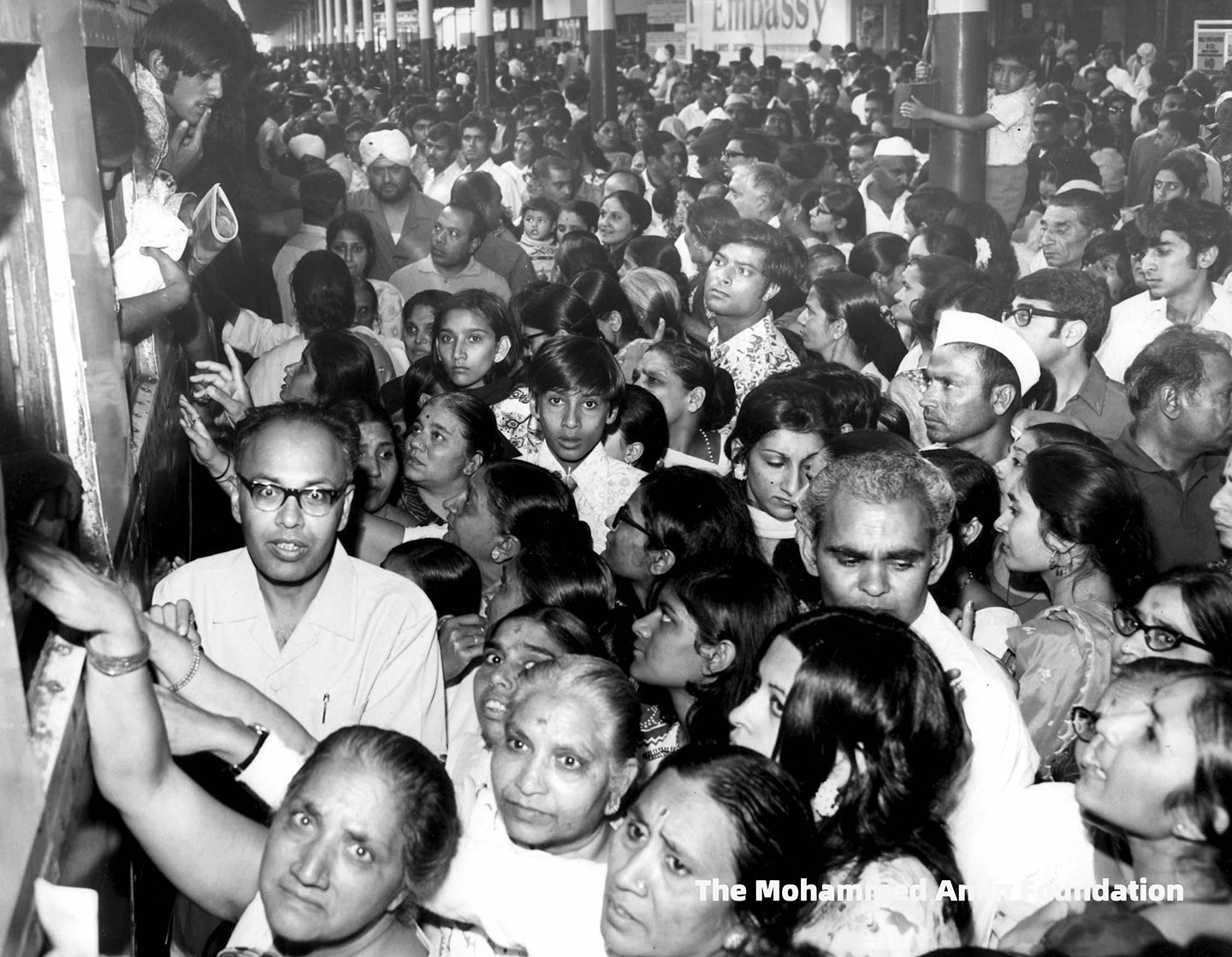 Thousands of Kenyan Asians met the refugee train from Uganda at the Railway Station in Nairobi. 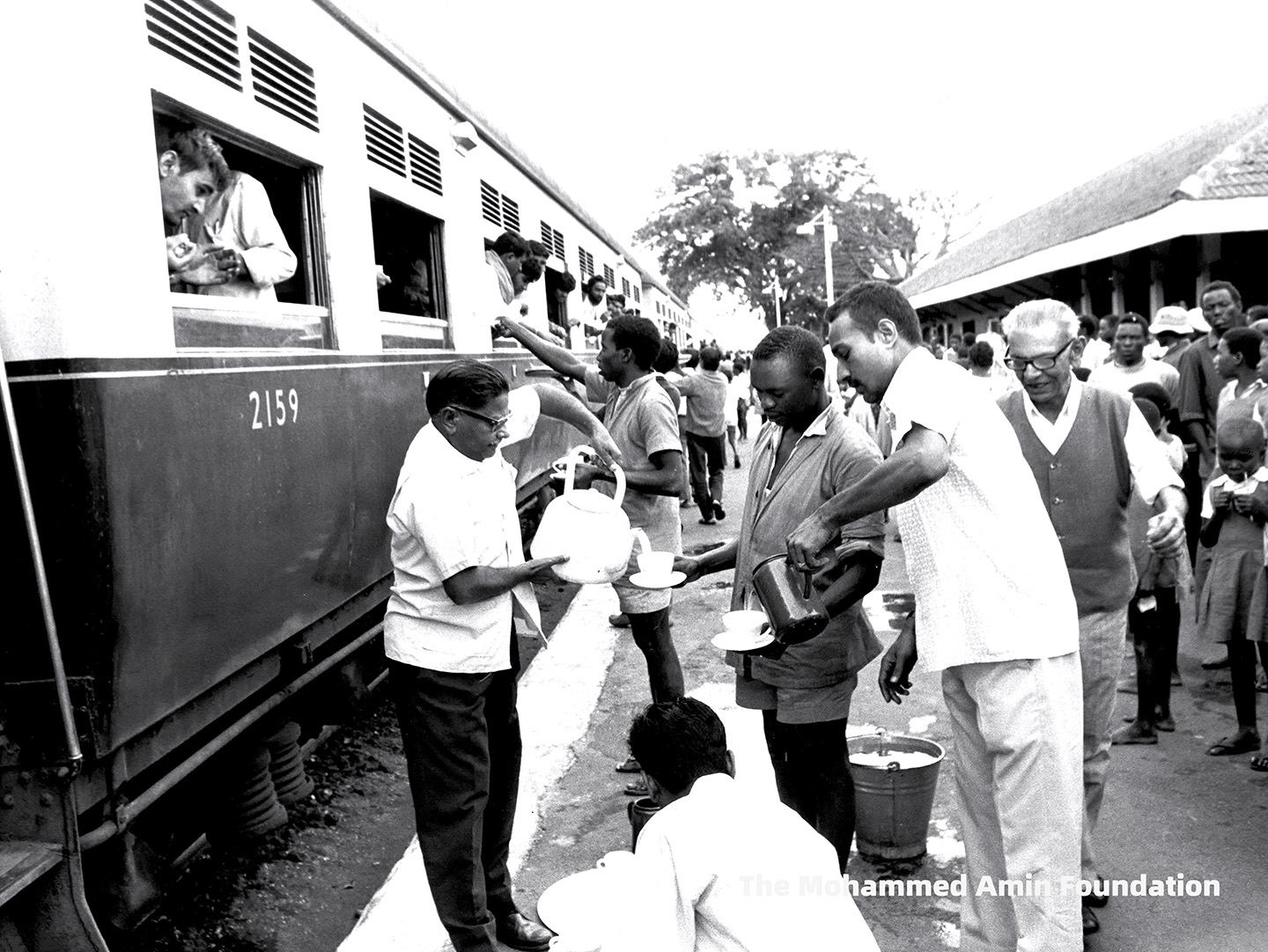 Kenyans serve refreshments to the Asians on the refugee train from Uganda at the Railway Station in Voi, Kenya. 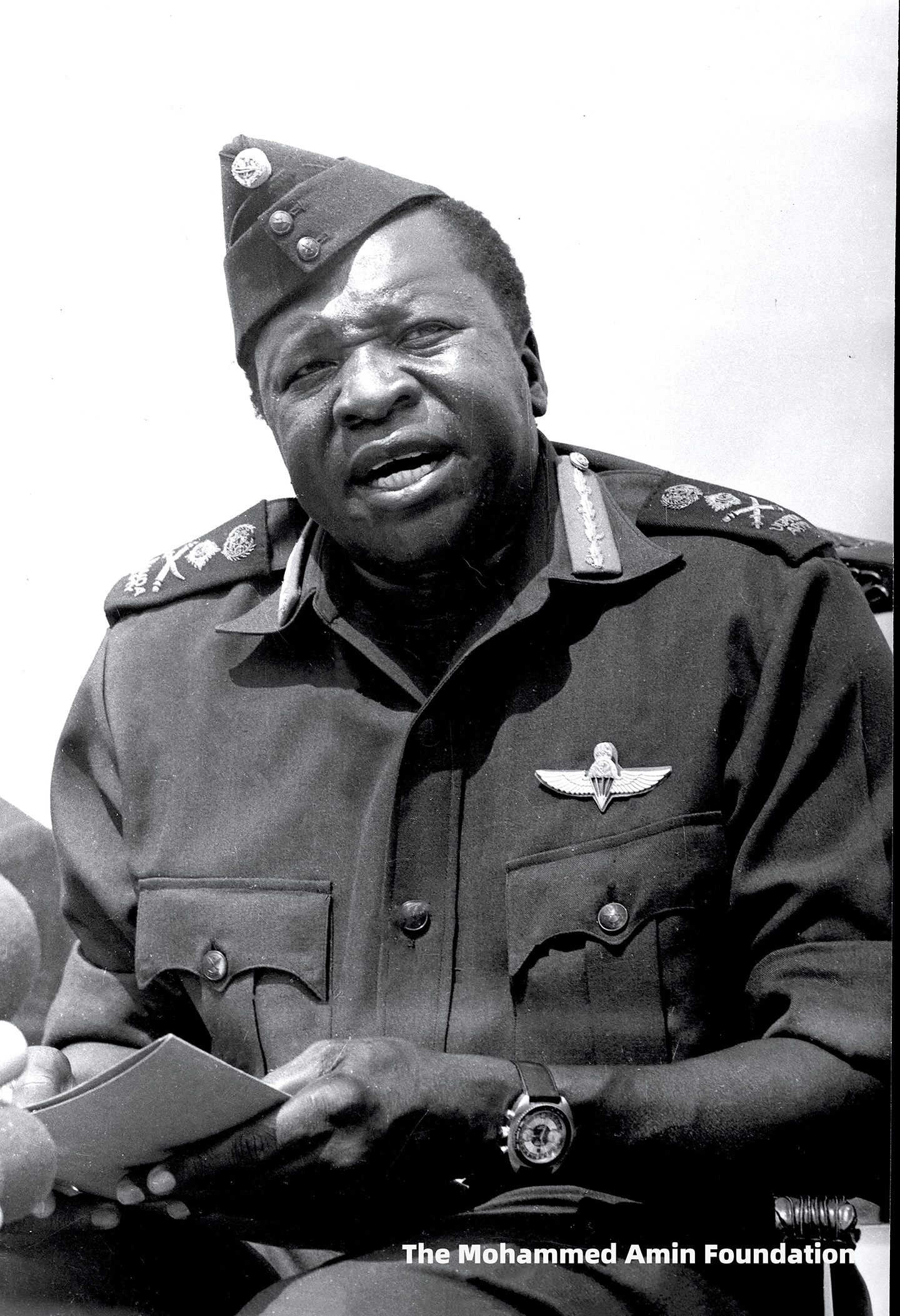 General Idi Amin Dada, a self-styled leader in his eyes, but a murderous dictator in the eyes of the world.

Young children who were expelled from Uganda on a train, on their way to Mombasa, Kenya. 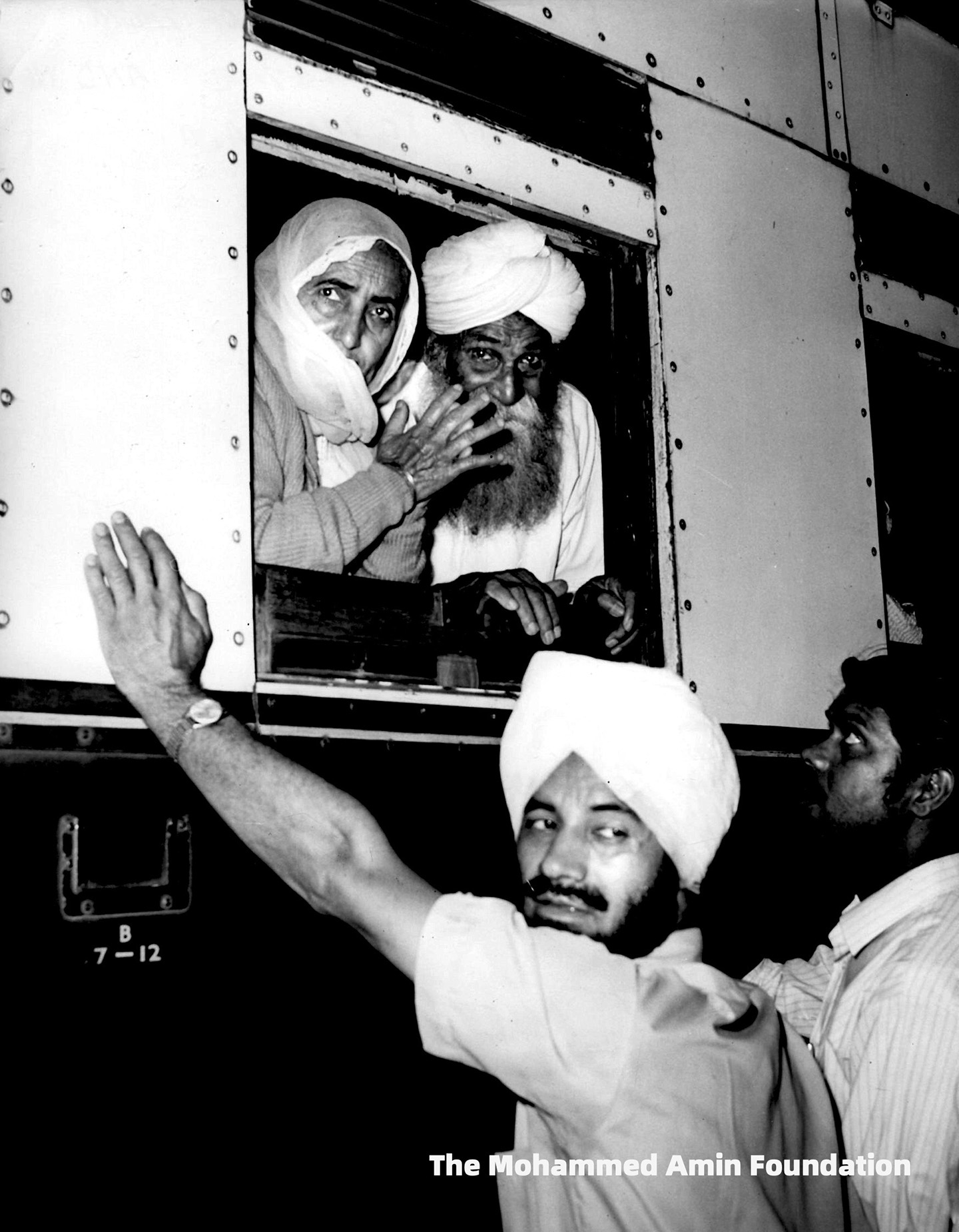 Saying Goodbyes – may never see each other again. 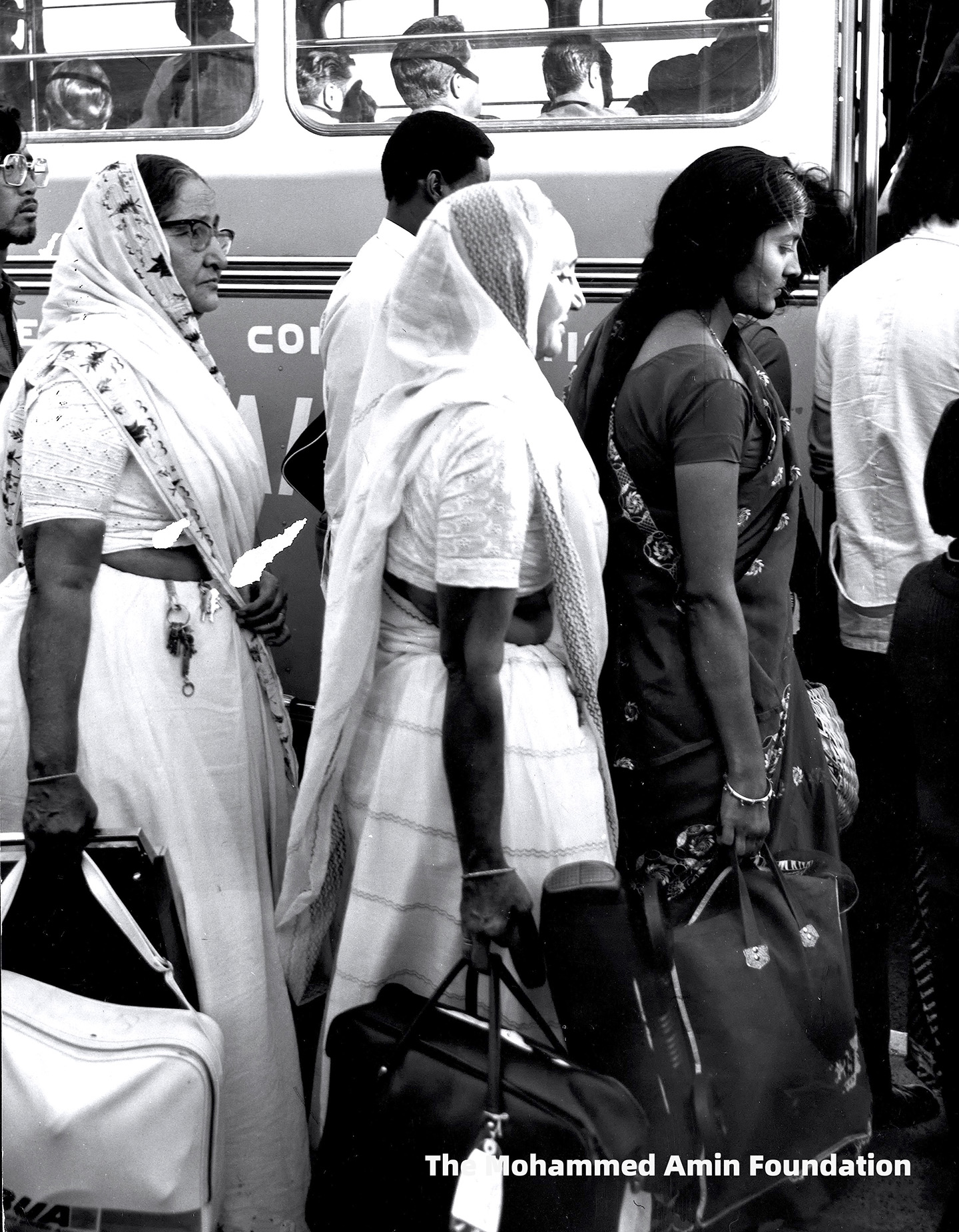 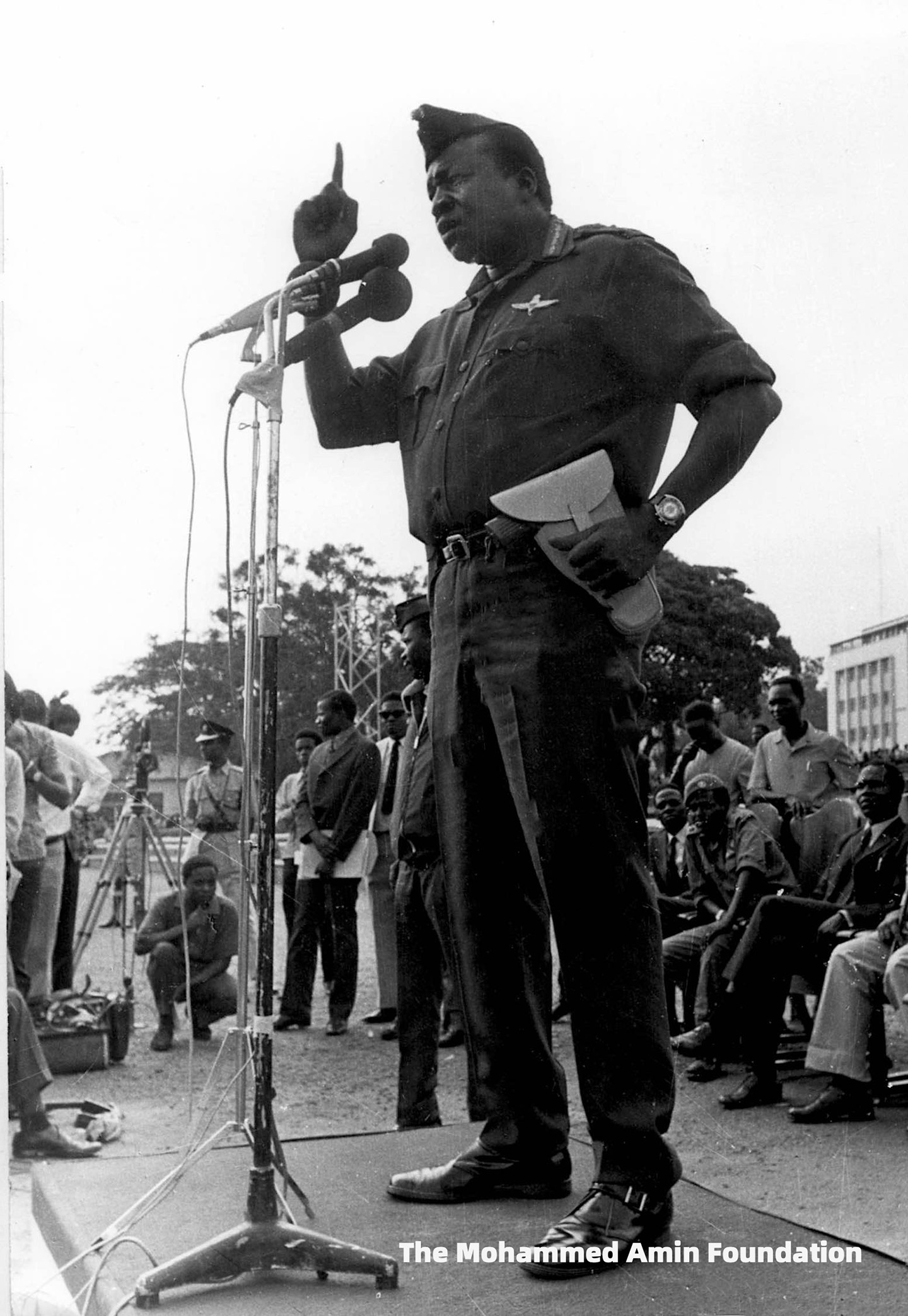