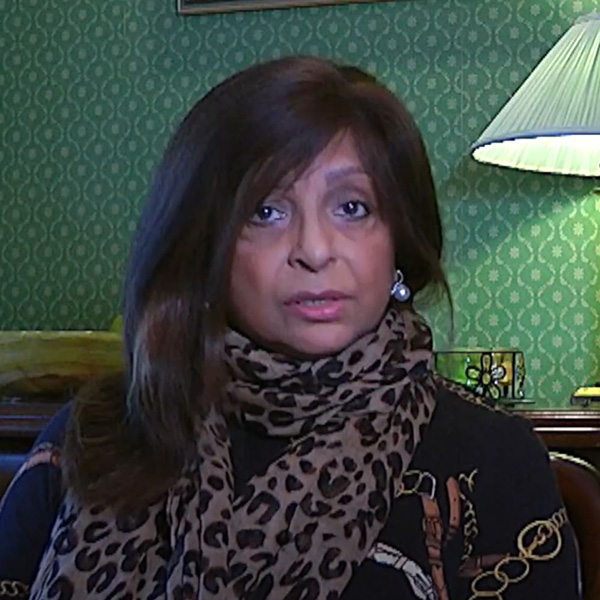 Bina Pepper describes her experience as a child refugee who had to flee Uganda in 1972. Here she outlines how the traumatic events impacted her family and the quest for stability and ultimate success in British way of life, including coming back to her British roots in Devon. Topics mentioned include: the traumatic memories of leaving; the airport searches; her father’s difficult experience resettling; disrupted education; overcoming and achieving through university and business success; a desire to want to go back and visit Uganda with her family.

0:48  We were based in a little town called Mbale, which was about 220 kilometres away from Entebbe and Kampala. We were given, what, about ninety days to leave. My parents had a business, bank accounts were obviously frozen, so we had erm, a very difficult time to prepare everything and then the journey was quite a difficult one. We erm, came in tandem with my uncle and his family and we came along in two cars. We had to ask our drivers to come with, and we had to prepare ourselves with some cash notes that the drivers would have to keep on them but hidden away, because starting from Mbale all the way to Kampala there would have been about ten, twelve, stops, you know – army stops and police stops – where we would be checked and everything. Our driver had to bribe them so they would give some of the notes that we had prepared for, because we were told about it by the people who had already travelled and along the way erm we did see some nasty things. You know there were people being looted, some places we’d seen some graves being dug.

2:14 When we arrived at Kampala, we were lucky enough to have my uncles living there, so we stayed with them and whilst all the ladies were at home, my father and my brother actually went to the High Commission office, the embassy, where we would all have to get our visas to get to the UK. So, that’s what they did and again they had to take our passports with some money with them as well. So visas would have to be bought but then if there were any issues along the way, they would have had to bribe people and that went on a lot but anyway, they eventually got the visas.

When we got to the airport, we were all searched and checked. And, I personally being the youngest, I had a knitted, well it was crocheted doll, it was quite, this sort of sized doll [indicates with hands] and it had a crocheted skirt, basically like an English old fashioned skirt and a body and then a hat and as we were going through, one of the guards took that doll away from me. I was very upset and he said that, ‘We need too check this doll.’ So basically my doll’s dress was ripped off, cut with basically a knife, because they wanted to check whether there were any notes were stuffed in there. So that was one of the worst memories I had since we left Uganda, that they totally ruined my doll and it was very upsetting. But it wasn’t as bad as it was what my mum because they actually checked all the ladies and my mum had some jewellery on her – gold jewellery – and yes, they took couple of her bangles which she was wearing. So they took those bangles. But, at least we were all uhm safe and we weren’t injured or hurt in any way, because there were other horrendous stories that we’d  heard about, where people were stabbed, a lot of people were killed as well.

Arrival in the UK

4:28 We boarded the flight. We arrived at Stansted Airport and when we arrived, it was very cold. There was a lot of snow. We were taken to an area where we were given some coats and then we boarded the coach and we came to Honiton, Heathfield camp, on the coach. When we got there it was snowing a little and it was quite interesting to see these fluffy cotton wool things falling down [laughs]. But, it was really nice to see the snow and also obviously it was very cold, but it was a lovely sight to be at the camp where we felt safe. And we were taken into a hall, where there were loads and loads of coats, and nice warm clothes and hats and gloves, and we were offered these items. I was so happy that I was given a beautiful nice coat.

That’s what I remember [laughs] about my first visions of the camp. I was only there for a week but whilst we were there, we did have an opportunity to sit down with some teachers and we were sitting down at various tables with children from local schools and just talking and writing about what had happened. But, of course, I then went on to London where my sister was, and then, you know, my next journey was from there basically.

6:00 The food was OK. Obviously, it was pretty bland. A lot of Ugandan Asians mainly used to have Indian food at home, a little bit spicy etcetera, but it wasn’t too bad. Having said that, we were given, each family was given some money to spend during the week. So we would, at times, if we were hungry or wanted to have a little look around, we would go into the High Street in the town. I recall going to Honiton High Street with my sister and we went to a greengrocer there and we bought some lovely juicy grapes and some nice apples, and it was really nice to taste these with your own money.

I left the camp with my sister literally a week later after we arrived and we went to a place in London where my other sister was already sharing with my cousins and erm obviously my uncle’s family were all there as well. So we stayed there for, I think, it was actually a couple of weeks and then my father was leaving the camp after that, so we at that point decided to see if we could get a place of our own. So, we then found this flat where we all went and of course, that’s when we started all getting into full-time education. My brother found himself a job.

My father initially, hadn’t found himself a job. My father was very depressed and upset about having a hand-out because he was like at the top of his trade in Africa, owning his own business and he employed a lot of people himself. So, it was a little bit of er, a sad situation and he fell ill as well erm. We went through a really difficult period for a year, and then a year later when my father was still very ill, we moved again, to a place where my uncles were living where we first started, so that we were close to my uncle’s family and I think that helped my father a lot. So again, we moved schools, I moved schools. My sister moved her college as well – education. So it was, you know, like a lot of the British Ugandan Asians, we did move schools and education quite a lot.

8:54 So at that other place where we moved to, we started settling in really well. My sister went to University. I moved on to sixth form college and had a good education and then that was it really. We all did our own thing. My father was then able to get a business with my brother, and it was very interesting because he bought a grocery shop where they did sell, like I said, greengrocery and things like that. So yes, I used to help out there, and then they bought another shop literally next door which was a confectionery, newsagent shop. So I basically helped at the shops at weekends and on Saturdays.

After having worked at the shops, I then got onto University, graduated and then met my husband-to-be. After I got married, obviously we were living in London, and then I think, what-, many years later, well about twenty-three years ago we arrived back into Devon! I came down with my husband and our two little girls about this high [gestures with hand], back to Devon literally on the doorstep of Honiton [laughs] would you believe. And we decided to buy some businesses, like we’ve come back into a circle here and ended up living in Sidmouth, not far from Honiton.

Then, literally now twenty-three whatever years later, we’ve got the Ugandan Asian anniversary, fifty-year anniversary, and my girls have been asking me about what happened when we came here and how did the story start and everything in the UK. I haven’t actually been back to Uganda. I would like to make a trip one day with my family, with my husband and my two girls. It would be lovely for them to go and see my birthplace and my school and things like that. I’ve got one or two other cousins who actually went from India to Uganda because the current regime there, are now asking all the Asians to come back and help rebuild the place. So yes, when we do get to go back, hopefully it will be nice to go back and visit them.