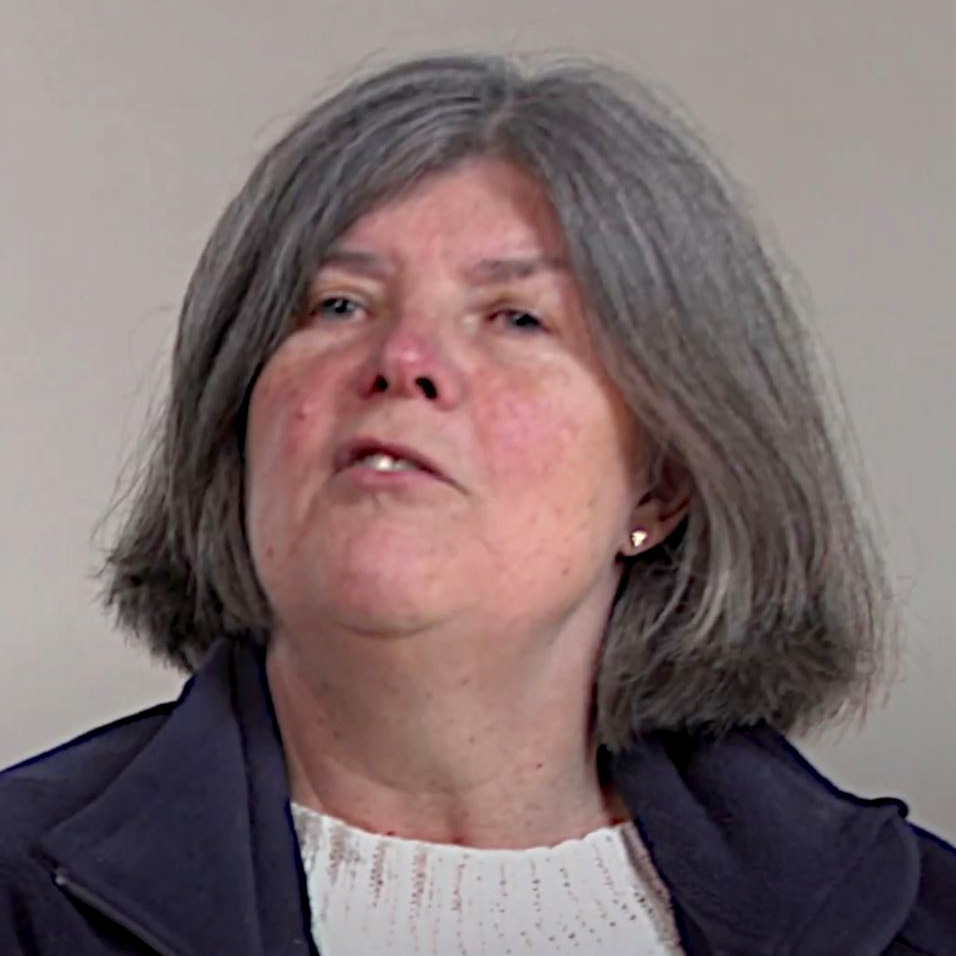 Deborah Sheridan reflects on her father’s Roger’s role as head teacher at a school established in Stradishall. She speaks about how the school was scrambled together, the cultural shock and trauma experienced by many of the pupils. Her father’s empathy being linked to his own childhood experience of evacuation in WW2. And moments of happiness as well as sadness throughout her memories.

0:42 My father qualified as a teacher. He was offered, interviewed and offered the role of what was known then as ‘unattached head teacher’, so you didn’t belong to a particular school but you could be jettisoned into a school if there were problems, if the headteacher was unwell, or if there were some special reasons they needed someone else to take over the reins. And it was at the start of September 1972, that he suddenly got a call and was told, ‘You are not going to such and such a place, you are going to be taking over a school in Stradishall, that we are expecting Ugandan Asians to be ejected from Uganda, and they will need to come somewhere with their entire families, they will be based in various camps one of which is Stradishall, and they will be able to live there and we will have to make a school for them.’ So that’s how we became associated with the school.

Conditions in the school

1:45 He had no staff, he had to appoint, very quickly, teachers, because there would be pupils of all ages, and er he looked for teachers that were a bit different from the usual. He looked for people who could adapt themselves to all sorts of situations, of dealing with people who had been through great stress, who wouldn’t have had necessarily a traditional United Kingdom education. So he was looking for people who’d be very adaptable and able to step in where there would be language and cultural differences too. So, he appointed at least three teachers. He had to beg and borrow for equipment. He was given a series of rooms over in the air base. They weren’t actually proper classrooms. They were, had to be divided up with cloth screens like the sort you might find in a hospital. No desks were the same, they were all different style desks, chairs, big chairs, little chairs, but he got the school together and they started meeting as a school. And, on the Friday before, he had three staff, a school, no pupils; on the following Monday, he had a school, three staff, eighty pupils; and the following Friday – five days later – he had a school, three staff, and 1,200 pupils.

3:25 We had heard about it, from the newspapers and from the news. That doesn’t quite match up to hearing him [Deborah’s father] the experiences that the families told him. He was very fortunate, to be joined at the school by some of the teachers who had taught some of the pupils in Uganda. Erm, but there were young people who had been through very traumatic experiences. People didn’t talk about post-traumatic stress disorder then but I am sure that that’s what affected some young people, and there was a lot of help given to some of the families there – robberies at the airport, or on the roads to the airport were common, and young people had been affected by that. There were people who had been users of wheelchairs who had had their wheelchairs taken away from them, who were put in an aeroplane and when they got to Stansted then couldn’t walk off. They needed support there, so there had to be a search for where can we get wheelchairs from, and there were at least two pupils who needed wheelchairs as well as some of the parents and grandparents who had left Uganda.

Life at the school

4:54 He [Deborah’s father] went into a building that had got things for adults in it, working adults, and suddenly they needed chairs that high [indicates child height].

He was well supported by, the erm, by the Education Committee because there were older pupils who they wanted to go to the secondary schools and the middle schools and the upper schools in the area, and so there was staff appointed to find them places, and once they’d found them places, they had to bring in school buses. There were school buses all over the place at different times of the day taking them to Bury St. Edmunds, and into Haverhill, to the schools there.

6.05 The Ugandan Asian teachers were able to do a lot of the bridging of any difficulties of that nature, where they were. They did lots and lots of writing. They did a lot of-, they used BBC Education Programmes that helped them because that had a lot of texts and booklets that they could supply people, Ugandan children with. They did lot of traditional English things, so they learnt songs like Widdecombe Fair. There’s a lovely picture of the children standing in front of a drawing of a horse fair; but there were also things like, you know, how do you explain parts of the body, if you are in pain or something like that, or if you needed hospital treatment, how would you describe to somebody that, that’s the, that’s the situation?

7.00 My father was given the hangar and told this is where you can do sport and he thought, ‘Fantastic – football’ only to find out that it was ‘Fantastic – hockey!’ [laughs]. They didn’t want to play football. So although he got lots of footballs, he then had to go and find schools to give him lots of hockey sticks and things like that. The Variety Club of Great Britain made many donations to the Ugandan Asian children and their families. They at one time sent them a big van which had a hundred pairs of wellington boots. So Dad had to spend a whole day, like in a shoe shop, trying to match children up with the right size boots. Things like ice cream – that seemed to be something brand new for some of the children. So there was always ice cream at the parties, and presents.

There was a lot of generosity. But erm, you know, for someone like my father, my father when he was thirteen it was the second world war. He was evacuated from North London. His brother was sent to another part of the country. My father was sent to Herefordshire. His parents were both teachers. They had to go somewhere else with their schools. So my father knew what it was like to actually be sent away with what you could carry in a suitcase, not knowing where you were going to end up, and not knowing where you were going to be living. And it’s quite possible that a lot of the people who had been in the Uganda Resettlement Board had been through something similar and therefore knew that it would be a trauma for people as well.

There was one boy who had drawn, my father found in his exercise book, a very sad picture of a face. And in the middle of the face there was a big red mark [gestures to forehead] and, it didn’t look right to my father, it didn’t look like a little boy drawing an Indian face and when he found out, my father asked him questions about it. And it seemed as if this family had been robbed on the way to the airport and someone had put a gun to this little boy’s forehead to make them give, what they thought would be jewellery, up. And this little boy couldn’t, couldn’t explain this in any way except by doing a drawing and that’s the most moving picture. And, yes – very sad but it was as if after that drawing had been done, that was that, he could get back on to learning and he did. He started to get back on track.

9:49 They were very good at Maths and some of the Ugandan teachers had pointed out to him that you know, you’d love teaching this young boy. He is brilliant at Maths. My father did not know much about Indian culture beforehand. And all of a sudden, we knew the word ‘gujarati’ [laughs]. That was a new word for us when we were children. Two of the teachers wearing the sarees – that’s lovely. A lot of children wrote to him afterwards. They had his, they had our home address. They wrote to him there. He wrote back. He had a few letters that we have still from these young people. They would send letters and what they wanted him to do was to correct their grammar [laughs]. My father wouldn’t have done that – he would have been just so pleased to have received a letter from them and to know that they were enjoying life in there, where they were now living. He wouldn’t have wanted to send letters back with things crossed out, but they were so determined to perfect their English – written as well as spoken – that they wanted him to write back and say, ‘No, you spelt this wrong!’

10:24 I remember, we er came out one Saturday and my father drove us on the runway very fast because there was obviously no traffic coming in the other direction. That was fun. My sister had a balloon trailing out of the window which took off [laughs]. I remember, erm the boys and girls at my school, and just how smart they looked, absolutely immaculate. The only boys in the school who wore suits were those from Stradishall. But erm, but gradually people started moving away and that was always very sad, you know, because my dad would say, ‘Oh we’re losing such and such family. They are going off to – ’. And, you know, he would always hope that they were going to be looked after well where they were going as well. So it was a sad time as well as a happy and amusing one.

12:03 The main thing was that these young people had been through a trauma. and needed support. and it was actually helping them not only getting used to life over here, but suddenly, a very cold country, you know – a very cold and wet country. We did bump into a family that he remembered and they recognised him in Poole, in Dorset, when we were on holiday once and it was a lovely, a lovely meeting there. Even though the children had grown up, they still knew it was my father.

He would have wanted you to learn to be self sufficient, to be able to rely on yourself, always do a good job and not to let yourself down, be understanding of the situation of others, and always take care of your family and friends and look out for those who are disadvantaged, and never give up.