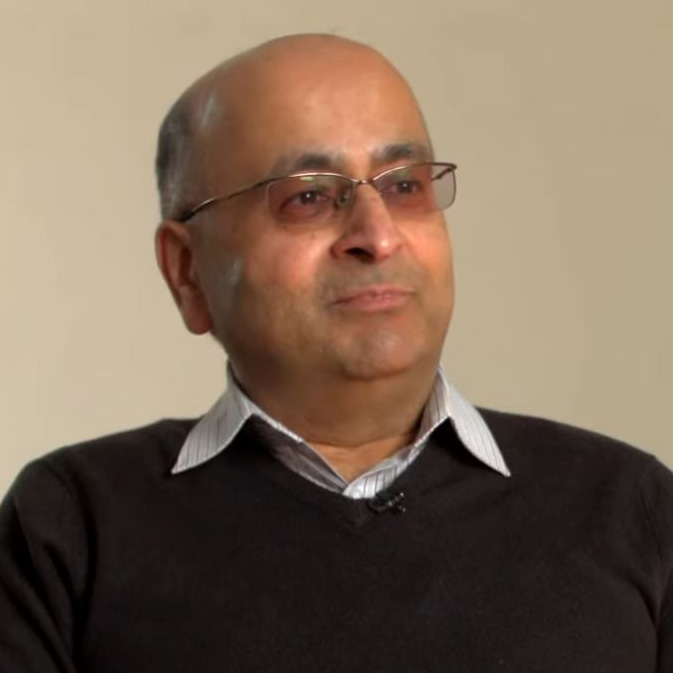 Harish Mandalia, now a company director and consultant in London, recalls his journey to the UK as a fourteen year old child. He expresses gratitude to the volunteers at Stradishall, feeling it was important to ‘give something back’; the food; the weather; and the culture shock of different family units in the UK. He also talks about the importance of education to him, and his feelings of the UK being ‘home’, but Uganda still being a part of his ‘roots’.

0:43 I was about 14 years old when I came here. We found out about expulsion through radios and newspapers and word of mouth. It was a very big shock for the family because we had to er uproot, er pack everything in a small bag.

1:01 We were six in the family. We came to-, we were lucky enough that we all came together rather than being split up. My mum, my dad, my sister and two brothers, so there were six of us altogether. Er. We left Kampala – it was a difficult time for us trying to arrange the visa systems to come into UK. It wasn’t just a sort of walk in straight. We had to get a visa from the British embassy, queuing up, lining up to get the visas, get our tax affairs sorted out in Uganda, trying to arrange a plane ticket, we had to fund everything ourselves as well and trying to get the money that we could take out of the country and the maximum we could take out was £50 for the whole family as well, so there wasn’t much in that respect.

1:59 Like I say, the journey we had, leaving Kampala to go to Entebbe airport – that’s the airport from where we took the flight from – it used to be very perilous. The army used to stop people on the way, at various ad hoc check points coming along the way, robbed the people of everything, whatever little they had in their bags as well. We were lucky in the sense that when we started our journey, the rules had changed. We were escorted by police on a convoy of coaches going onto the plane. So we were lucky in the sense that we were not stopped on the way.

2:42 At the airport we had to check in and then we were held in a hangar; er because we were not in the main building of the airport but we were on the side in there. We had to wait about seven to eight hours waiting down there, for the flight to take off from there. And we were scheduled, on a scheduled flight from Uganda, Entebbe airport. Originally we were scheduled for Stansted but because of, I don’t know, weather conditions or something, the flight got redirected to Heathrow airport. So we were transferred from Heathrow airport to Stradishall by coaches.

3:23 We came into an entry centre to register in there and er collect clothing, winter clothing. We came to the Stradishall camp on 24th of September, so about a month we were here. And then we joined my maternal uncle in West London. It would have been definitely a very bad experience without the volunteers. Their contribution and help was very important in there. I’d take this opportunity to thank you to them, really not just from me but my family and I’m sure I speak for all the other Ugandan Asians who came through here, that life would have been very different if we didn’t have their help.

4:08 In Stradishall, we were allocated – there were dormitories in there. So the families were separated by screens – the hospital type of screens to divide the families in that respect. But we were lucky that we were on the same dormitory, there was a little office – it might have been a corporal’s office or something, in the dormitory. And that was allocated to my mum and sister, so in terms of security and privacy for them as well. So that was kind of lucky. But, the, the lifestyle was excellent because the volunteers helped a lot on the canteen side, to prepare the food. And, what, my brother, myself and lots of other, other, refugees who were there felt that it was important that we give something back and not just sit back and take everything that the volunteers were giving. So we started taking, er helping out in the canteen, cleaning up, washing up, put the chairs up, clean the tables, put the plates away. So, whatever we could do to help rather than hinder.

5:23 I think the cultural shock was lots of things at the time, the, the family structure and looking at how the, the, locals lived in terms of family unit. We were a very close family unit in that sense, all the family together and it is, was difficult to see the British culture being sort of very independent and on your own and doing everything. Obviously things have changed now, even in the Ugandan Asian community as well. So that was kind of the initial shock. The weather, was a big shock for me, coming in September time in the autumn and beautiful sun, and then you find out it is very misleading. It isn’t sunny and warm, out there. It is sunny but it’s not warm. So for the first time I managed to catch a cold, so I had to use the medical services of the Stradishall in there [laughs].

6:26 The food in Stradishall was, I would say, a good effort by the volunteers, sorry [laughs]- being a spicey man from – liking my spice in there. Er, so, we tried to-, I think a lot of the ladies who were the expert chefs in the Ugandan Asian community also tried to help in there. We were lucky that some of the companies who had established themselves here, Indian companies, one of them was Patak’s, just starting off their business at the time, they actually came. I remember, distinctly remember them coming to Stradishall and their bringing their wares wound, pickled jars and mango pickles and chilly pickles and so that kind of helped to supplement the canteen food, in there, so to speak.

Adjusting to life in the UK

7:14 When I left, I was starting my secondary education, in Kampala. And, coming here I joined in the, the schools that was set up in the hangars, in Stradishall in there, to carry on with my studies in English and Maths, as the main basic once in there. So after coming here I did join in, register for the local school where I lived.

7:40 I carried on in West London, did my O Levels and went on to do my As and did a degree in IT. Here, when I started I had to, as mentioned previously, to start contributing to the family kitty to pay for the lodgings and the food for the whole family. So while I was waiting to register for my education, secondary school registration, I had to start working straight away. I worked in a fruit and veg shop in West London and er-. I had never previously worked in my short life in Uganda. So it was an experience working in a fruit and veg, carrying boxes of apples, bags of onions, potatoes, bananas, in the winter of ’72. Coming back home with aching back and complaining to my mum, ‘I can’t do all this’. That was a very good lesson from her to say, ‘Now you go into school. You are not going to give up your schooling, so go back to school unless you want to do this job for the rest of your life. And I said, ‘No mum [gestures putting his hands up], I am not going to do this job if I can help myself’. So education became very very important motto in our family. It’s not only in our family, I think it’s in all Ugandan Asian families as well. Education, Education, Education. The whole idea was, for my mother said to me and my brother and sister . ‘You’ve got to learn to stand on your own feet. Nobody is going to give you anything for nothing.’ So that’s the motivation that drove, well for me to personally [gestures hand on chest], to say, get the best education. The advantage was that the education was free here.

Britain as his home

9:37 Now, I can’t even envisage what kind of life I would have had in Uganda really because as far as I am concerned, this is really my home now. So, I assimilated into the society here really. There is still a connection with Uganda because I was born there and started my formative education there. So it is er, it’s still part of me. It sounds a bit smaller part now in terms of the number of years, but it is still part of me, so it’s part of my roots.

10:17 I was very, very pleased to hear that this [BUA50] was taking place. I heard from a local person living in this area – a friend of mine and I got in touch with them and said, I’d like to be part of it and try and give my family’s history as well, and in a way to come here and say thank you really, very much so to the volunteers who helped us. A lot of people came through the Stradishall area and we were treated excellently, there’s no complaint at all really.