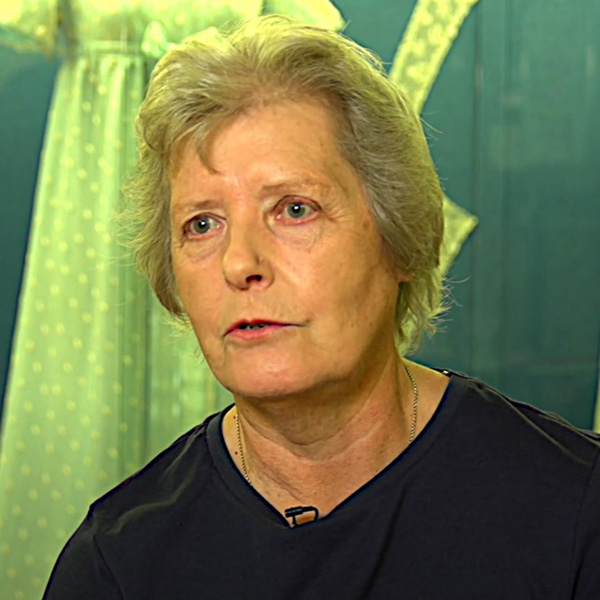 0:47 My first memories are that I came home for my Christmas holidays from college and my mother, for sometime had been going up to the camp and helping out and she asked me if I’d like to go, and so I went with her and my overriding memory was how awful the huts were, built for soldiers, furnished for soldiers with one heater, one end of the hut, iron beds, not very nice mattresses and we would collect a pile of sheets from the gatehouse, pillowcases, and make up the beds and that was my biggest memory of doing that.

Learning about each other’s faith

1:31 The most interesting thing, was that my mother became very involved with two families – one family had a little girl called Smita – and we used to take her back to our house for a meal and I took her to the church, she helped decorate the church for Christmas, she came to the carol service. I think it just entertained her and amused her and kept her out of her parent’s hair. And, uhm, the parents came, well, perhaps it was just the mother – I don’t remember but parents came and then eventually they asked us if we would like to go to what I’ve described in my diary as a prayer meeting and I now know because I have studied, it’s the ‘puja’ and so I witnessed a puja in the hut. I took them to the Church. In Honiton Church, at the time, the background to the altar was where it isn’t now. It was behind the altar, it isn’t. It’s statues of Jesus on the cross with the two thieves either side and they said, ‘Oh! You’ve got three Gods.’ And I said, ‘No we haven’t got three Gods. The one in the middle is the important one and the other two are bad people.’ They couldn’t understand that at all, well why should they? And I was hopeless in trying to explain the theory, the doctrine of Christianity. Had I known all about, Brahma, Vishnu, Shiva, I would have been able to do it but at that time I didn’t understand Hinduism and that’s a regret really that I couldn’t talk to them about their faith. They had pictures of Ganesh and other Gods on their wall. One of my photos has that picture in the background. So they’d obviously brought those pictures, even though they were only allowed to bring perhaps one suitcase, it was important enough. And they must have had all the instruments they needed for a puja because now I know what you have to have. They must have brought those with them. I don’t remember there being any statues, but there could have been.

3:53 Wearing a sari was just fun, and I am standing in our back garden wearing it, and they’d just explained how to twist it round and tuck it in, throw it over your shoulder. I suppose they wanted to do something for us as well as us doing something for them and looking back, it must have been a cold day because this all happened in December and January, so I must have been cold but I don’t remember saying, ‘I don’t want to stand in the garden, have my photo taken, just in a sari’ [laughs]. But I must have been thinking that and I am standing there holding hands with this girl, Smita, and I would love that we could trace her. That would be really good.

4:39 My biggest problem was that I wasn’t doing my college work. When I got back to college, I had to say to the tutor, ‘I haven’t done my vacation work because I have been helping out in the camp.’ And he said, ‘Get it done for next week’ [laughs]. That was-, you know [shrugs]. But it was rewarding, yes, and my mother wrote to the families until her death in 2004. Sadly we don’t have those addresses any more.

5:07 My grandma, who lived with us was very worried about how cold they all were. So she was desperately knitting scarves, hats, jumpers, and I am told that there was a big collection of clothes and they put them down in the crypt in the church, to the point that they couldn’t have Sunday school in the crypt because it was so full of clothes. Now, I had long since left the church because I gone to college, so I didn’t witness that myself but I have a friend who said she wasn’t able to go to Sunday school because the crypt was full of clothes. So it must have been a concern for the people of Honiton that these people were not sufficiently dressed, because the ladies had a sari with perhaps a cardigan over it and they would have been freezing. It was winter time.

6:02 My mother was very keen to do any voluntary work that she could. After I left home, she joined the Samaritans, meals on wheels, and all these sort of activities, so this was another thing that she got involved with, through I think Bunty Charles – who you would have heard of and other ladies because women didn’t go out to work in those days – mostly – so they had plenty of time to go up the camp. And I should say, my grandad had worked for the army so was familiar with the camp and so we were familiar with the camp. We used to go for passing out parades and displays and things when the army was out, so it meant that we knew our way around a little bit.

6:52 I think my mother was interested because she probably was asked by somebody else, ‘Would you like to come and do this?’ and she would just say, ‘Oh yes, I’ll go and do that   because that’s the way my mother was. She was very involved with the church. I expect the church had asked as well but I don’t remember. I’m only guessing that. But I think probably the church had said ‘Would you like to go?’ Uhm, and she had friends who certainly went – a number of friends. Erm, because my grandma lived with us, she would get involved and she did all the cooking in our house, so she cooked for them. Now, of course, what I wish I could know now, Grandma would have cooked meat and vegetables. They wouldn’t have eaten the meat so how did she deal with that? I don’t know. I don’t know if she had said, ‘Oh I will do’ – she wouldn’t have known how to make a vegetarian meal. Erm, so I don’t remember any problems like that, and a young man turned up one day at the camp. He knew that the Asians were there. I don’t know where he’d come from and he used to just pitch in and do any work they needed and my mother was aware that he was a bit of a loner really and she used to take him home for meals. We had him every single day for meals and I remember him being there when I was there on holiday. I suppose he slept at the camp because he didn’t sleep in our house but he came for his midday meal every day. I don’t know who he was, or where he’d  come from [laughs]. He might have been part of a scheme or he might just have volunteered because he thought it was a nice thing to do.

9:12 As regards to the fact that there were foreign people in Honiton, that was not unusual for us because there were some soldiers who were not English, possibly not err Asian extraction, but certainly Black people and that used to er-, surprise my sister and myself because we weren’t used to people from other nations and er, so that would have been a difference for Honiton and when I went to college, I went to Sussex – again, very white. So that was unusual for me. But I don’t remember it being a problem, at all, and I have spoken to the other Asians who said that in Honiton they experienced no prejudice. It was when they went on somewhere else that the problems started.

10:12 As regards to the Ukrainians, when the government said that people could take people into their homes, there would be a certain amount of money paid. It worried me a lot. That you might say, ‘Oh yes, I’ll take a Ukrainian family that would be nice thing to do – not thinking about the fact that it would be a different culture, they would all want to wear different clothes, they’ll want to do different activities and more most importantly, they would be traumatised. And I understand, it came up on the internet this week, thousands have already been turned out of those houses who said, ‘We’ll have a Ukrainian family.’ And they’ve already said, ‘We can’t cope.’ And they’ve now had to turn to the council and said, ‘We’re homeless, we’ve got nowhere to go.’ Erm, which is going to be a big problem because if the councils give them a property over somebody who has been waiting on this country, that isn’t going to help. And no ones-, whose picking up the trauma? I don’t remember, there being traumatised people on the army camp. I wasn’t there long enough, but there must have been! We didn’t talk about post traumatic distress disorder in the 1970s but there must have people who were traumatised. So hopefully, well we have, we’ve learnt about it. We know now. So the Ukrainians should learn-, well experience-, they will benefit from the experience now.