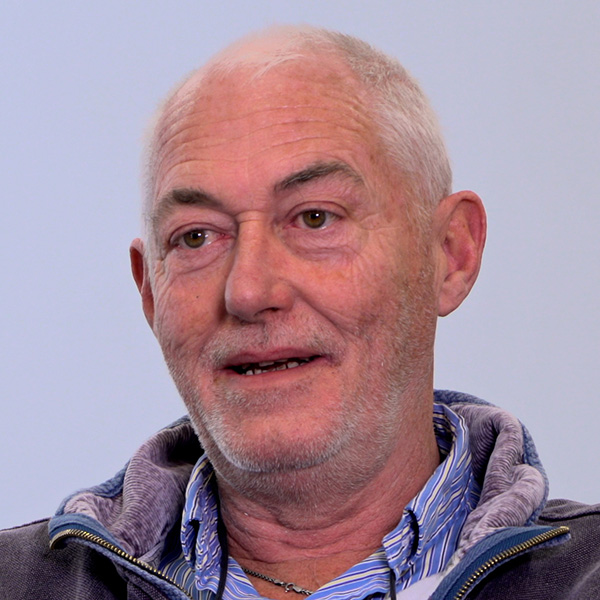 John Pughe, helped with fitting out Tonfanau and did odd jobs around the camp. He shares his knowledge of Tonfanau camp, his memories of the Ugandan Asians arriving there, the shock of the cold for them, and his fascination with the different culture and language. He speaks of his grandfather being compelled to help by his previous experiences witnessed during WWII. Other topics mentioned include: cultural differences; the Ugandan Asians being ‘friendly’ and ‘kind’; the Ugandan Asians and the camp being a potential boost to the town and businesses

0:43 Tonfanau camp was built, er I think it was 1939, just before the Second World War. It was Royal Artillery and then became, after that, junior leaders for officers. And, the army camp – my father when he was called up in 1956-57 – he was like me, an electrical engineer, and he was stationed back in his home town into the army camp there. It was very cold in them buildings in the winter, just coal, coal heaters in them. And, the camp-, the town relied on the camp a lot and to lose that in the sixties… We were so pleased to see it being used again, and hopeful that they would have been there longer than they were, but no doubt, they went to better pastures and the old billets which were made of wood were obviously quite cold. Yes it must have been a very big shock when they came to something like that – it could look like a prison camp, I suppose, you know, it was an army camp. There was a lot of them were crying and lot of them wanted to go back to Uganda and knowing that they couldn’t, and basically they didn’t know what was coming their way.

2:03 We learnt from the school actually and they told us, you know, that they were being deported from Uganda and to welcome them in. Er, at that time really, we never saw any Asians or anything in the town. Erm, so it was quite exciting, you know, and when we did meet, them they seemed to be very friendly but I can always remember, they felt the cold very much. You know, coming from Uganda the heat there, to come to town, I can’t remember what time of the year but they found it very very cold and they were wearing quite a few jackets that people had given them in the town. And erm, the colours of the saris and the turbans and the-, young lads were wearing. We got quite jealous of the young lads because they were pinching all our girlfriends! [laughs]. But they integrated quite well. They were there only here for a brief time, but I remember the camp well. And, as I say, a couple of families came to our house a couple of times for lunch. They were asking, you know, what’s that potatoes and stuff like that, you know, how do we do roast potatoes. They hadn’t seen that sort of thing. And, they introduced me to curry, which I like very much still. Some of them must have been quite wealthy in Uganda. One of them showed us suitcases when I went down to the camp, where they’d stripped the lining out and put the money behind to get it out, and in coats as well down the sleeves, you know so erm. But it was very distressing for them that they lost their livelihoods. You know, some of them were quite wealthy and you could see that on them, very well educated and smartly dressed – as best they could with the clothes at the time.

Empathy for the expellees

4:02 I know my father was stationed in the army camp and he was saying, ‘I hope they’re given them more coal than we used to’, because the billets were freezing. And everything was new there. They put new cookers in everywhere there, lighting and that, did the best what they could for them. You could see they had worked hard. They had got their businesses and it was er,  Idi Amin – to threw them out like that and to take their wealth basically and their knowledge of finance and um whatever, erm whatever. Whether they were shop keepers or not –  I can’t remember now, but they were very kind people as well. Years later when I joined the ambulance service, the lads that were working at that time when the Ugandan Asians were here, were basically saying, little things that had happened while they were there. And the women wouldn’t go into the ambulance unless there was a nurse with them, for again, for religious purposes I suppose, and it was difficult to diagnose things so we had to take them to the hospital.

Fascination with the cultural differences

5:12 We were fascinated! You know, one of the lads – he took his turban off, showed us how to put it back on. I must have got a picture somewhere but I can’t find it, of me wearing the turban. He must have been a Sikh, if I remember, because he had very long hair, which he used to put up under the turban and we were fascinated by the designs and… Well the language as well. You know, we speak Welsh, but to hear Indian language was fascinating to us. And I can remember, as I said, once before, in school we had to have assembly in the morning. While the Asian population, our school children, they didn’t have to have assembly. So I was thinking of converting to be a Muslim so I didn’t have to go to assembly in the morning [laughs].

6:08 Ones I knew, as I said, they appeared very well educated, well spoken. You could see that some of them would get on, as you know, with whatever they did in Uganda, they had businesses there, so you know it was very hard on them to have all that and to lose it all.

I think it was a big shock that you know Idi Amin had kicked them out. My grandfather went through the Second World War so he saw a lot of refugees and stuff like that and his comment was straightaway, ‘We’ve got to help them’. And he said, ‘I don’t want them to go through what I’ve seen.’ Obviously they were coming to a different place, not being bombed at, but it’s still such a shock to them and hard on them, and I think that’s why they were taken into the hearts of many people in Tywyn here. My grandfather was very interested in politics and anything like that and… We were always kept up to date with the news, and to actually talk to people and see them ourselves and… quite a bit came back to my grandfather of what he had seen, and as he had worked in the camp as well before when it was army, and he was very worried about them. Especially the kids – you know, were they getting enough food. When it closed down that was a big loss to the town and I think, in some ways we thought, that with the Ugandan Asians coming here, we were gonna get something back, because a lot of businesses relied on it. And I think, most of them, when the Asians came here, were trying to help as much as we could.