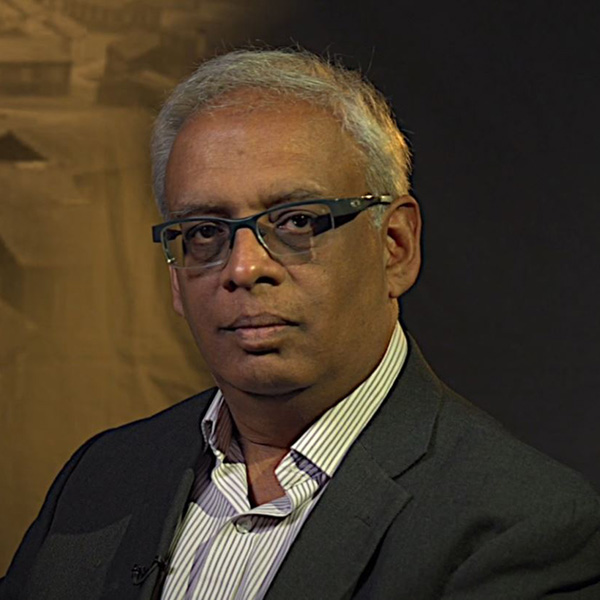 Manoj Chitvanis was a camp resident in 1972 and describes his experiences. His experience with the Red Cross in Uganda helped him to adapt to Britain and he has since continued his service with Red Cross in this country. Chitvanis discusses life at Heathfield Camp, the cramped and cold conditions, but how the volunteers and friendships formed made a big difference. Chitvanis and his family then chose to stay in the South West of England, and he became the only Asian child in a comprehensive school in Exeter. Topics discussed include: weather; food; WRVS; Red Cross; education;

0:46 All the Asians were given ninety days to leave. However, as my father was a civil servant in the Northern District territory, as a GM, we were living in the European sector. We were invited – well, all the heads of family were invited, including the Europeans who were there – to Kampala to endorse that they had the right to stay on or not, being British subjects and citizens. So as a consequence, a convoy was set up, Dad left at two am in the morning. By lunchtime the office had a phone call and the office staff then went to each of the residences, saying, ‘Start packing.’ Only the Israeli family were spared, so the rest of the families had forty-eight hours to leave the country as opposed to ninety days. And, the local Adjutant General then set up a return convoy for the families, from the Northern District to travel to Kampala and get on the flights out. So it was very different to the normal Asian families and business folk.

1:54 It was a dusky evening, October the 14th. There was no snow, when we landed but it was dark, cold and clammy. So we had experienced frost when we landed at Stansted Airport in the morning, which we had never seen before, getting off the plane we could see that on the grass, from Stansted on the journey down to Exeter.

2:20 The first memory of the camp was getting off a coach on a cold, dark, evening, and being ushered into the main reception hall, where there was a whole lot of clothing laid out, and we were traversed through several tables, and then after that going into the medical camp and having some x-rays taken. And then we were assigned by, I remember distinctly and vividly, a WRVS lady was there, who said, ‘They have been assigned hut number fifteen’. And, we were escorted by a member of the Red Cross to hut number fifteen as a family. The only way to describe it, that the audience may understand is to consider a modern garden shed, a wooden slatted shed. That’s what the huts were like, but rather larger than a garden shed, and it accommodated approximately four families of four with one bucket toilet by the doorway. There were no walls, there were just wooden partitions, just screens; two sort of tables – a table and camp beds which folded in, which was made of wood as well – two blankets. And that was it, no carpet, no nothing.

3:42 Mum and Dad were involved quite actively, being among the few English speakers there. A school was set up. I remember going there and I do remember my teacher’s name as well, Jo Cuthbertson. She was amazed that there was one student there, and I had to be him, who did speak English, who could help out. So yes: [I was] Class Monitor, effectively, [holds hand up and laughs]. You know, they held classes, they helped us through, you know. The education didn’t have a curriculum per se, from what I can remember, but to a lot of the people or children there, it was learning the basics – A, B, C, D, one, two, three, four, and adding up. So I ended up assisting.

Having been in the first two or three waves of the arrivals, we had been used to English food and English cuisine, so to us it wasn’t a great shock, but we could see that the other Asian community, it was unheard of, you know. You don’t have toast for breakfast, or cereal, or porridge, in an Asian household and the food seemed very bland to many of them. There was a lot of wastage. And then the whole situation was soon addressed, because they said, ‘Look, we can see you are not coping with this food’, and the hierarchy then managed to get the residents involved in helping them cook and cater. If you had any sort of nursing qualification, you helped out in the medical centre, as it was known, at the bottom of the camp, and various people did try things. But being a young boy, you know, I just got involved with the youngsters and the activities I ran. In fact, I have just seen one newsletter in which I am mentioned, where I set up a Red Cross Unit in the thing. So we ended up with about twenty-five to thirty youngsters who joined the Red Cross as cadets and learnt first aid and things.

6:03 I was in the Red Cross in Uganda in my school, as opposed to Boy Scouts, which was another group. I decided I would join the Red Cross because it seemed to be better facilitated shall we say, and I wore my initiation badge on my jacket or jumper when I came to Heathfield Camp. And that was spotted by one of the helpers amongst them, who I developed a close link with, and they said they were delighted, and he sort of asked me a few questions and he said, ‘Ah, so you are a proper Red Cross person, not just a badge stuck on.’ And I developed the unit in the camp to help and assist with, alongside with two very good gentlemen, both of whom have passed away now, and I continued through the Red Cross.

7:06 One of the things I discovered is that I was the only Asian child in a comprehensive school in Exeter. We had no idea about how schools operated in those days, so we just got taken there. My sisters got taken to a primary school, er I got taken to a secondary school and that was it. And then as you went through school, you discover, and your parents discover, ‘Well that that’s not the right school for my son’, but it was too late to change schools at that stage. But it was a learning curve, shall we say, of kindness, harshness, bullying on site, and you-, you … survived. From my school then, I made a few firm friends, who in fact all joined the Forces because we played sports together, and most of them joined the Forces; I then went onto the main college in town, which is Exeter College, where I made more friends and I have kept in touch with them as and when. Some of them know my story and some didn’t know my story until very recently, and to them it was a big eyeopener.

8:31 I was fortunate enough in knowing about the UK because of Dad’s work. I used to have lots of European friends and Dad had lots of expats who worked with him, so they knew that the South West was the place where a lot of people retired; the weather was brilliant compared to the northern areas. And, that’s one of the things that helped my Dad, and us as a family in staying on in the South West. I remember at the resettlement camp, when we had the interview and they asked us, ‘Where would you like to go? We’ve got Birmingham, Telford, Glasgow and Bristol.’ And Dad said, ‘Can I not stay in the South West?’ And he said, ‘What?! Most of your people want to go up to the North’, which I really remember, because he was quite [humph], so surprised! And that’s how we came to remain in the South West.

9:33 One of the things that is often missed out is how we were helped out, and there was a particular lady called Jean Lamb who lived in Thorverton, which is not very far away from Exeter. She actually got involved through the WRVS and through Exeter Cathedral as a helper, a volunteer. She invited us to her, well, mansion at that time in Thorverton, which was the original Bury House, for Christmas, and we had never had a Christmas meal, and she had asked some young children, one from Blundells and one from Exeter, to come along to sort of entertain myself and my two sisters and some adults. And we had a lovely Christmas lunch- stroke-dinner. We saw our first pantomime in the village, and then lo and behold, later on in the evening when we got back home to our house, there were carol singers and she asked me to go and open the door and I was amazed! I had never seen carol singers before.

We kept in touch with Jean and her son Charlie, who now resides in Nepal, throughout and we have been firm friends all the way through. And of course the assistance offered by the friends I made through my contacts with the Red Cross, and I kept in touch with them and I stayed in the Red Cross. I became an instructor, examiner and advanced first aider in those days. But then university life, sports, etcetera, took its toll and I just keep in touch with some friends along the way.