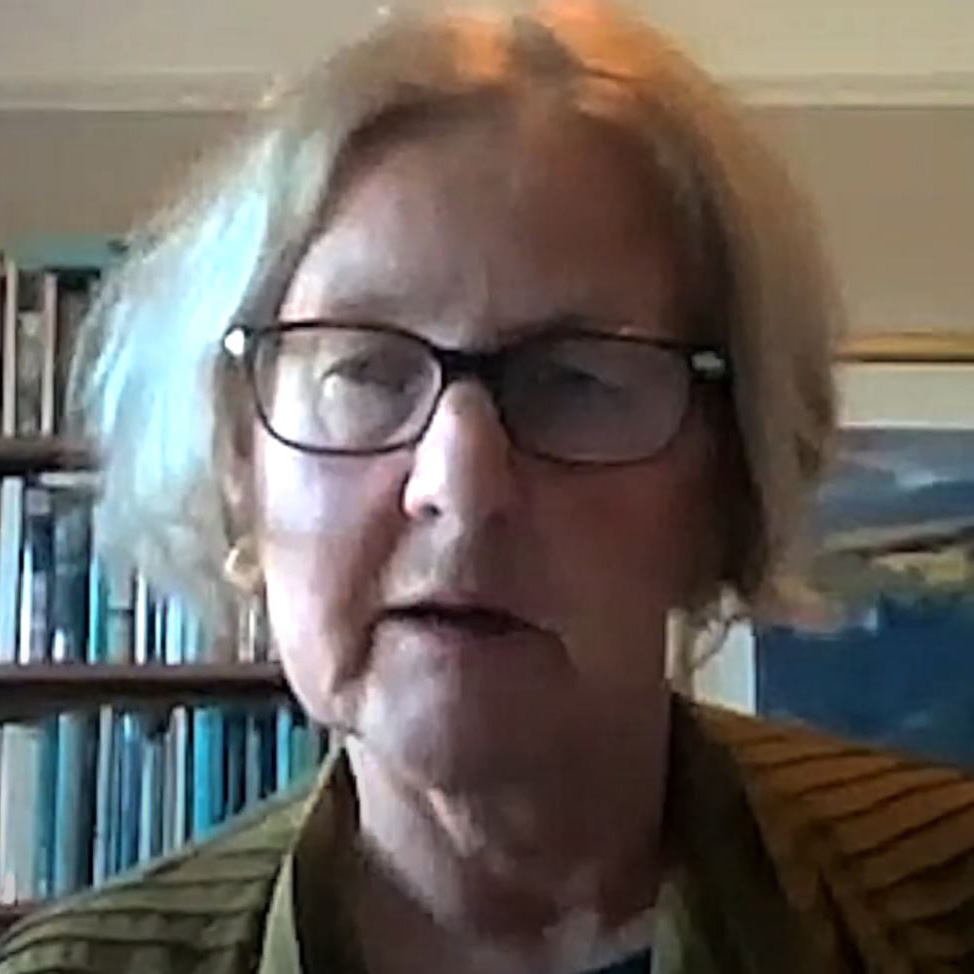 Nancy Edwards describes her time as a volunteer at Stradishall Resettlement Camp in Suffolk in 1972. She went on to become a highly successful academic as a Professor of Medieval Archaeology. Here she recalls her experiences of camp life when she was 18 years old. Topics discussed include: difficulties in the camp; overcrowding; religious differences; exchanging culture; Bollywood; food; pressures to resettle refugees; how the experience effected her; Ukraine; changing British attitudes towards refugees.

0:47 I arrived at Stradishall quite suddenly, in the first week, in the beginning of the first week when the refugees were just beginning to arrive. I think I was one of the youngest volunteers because I was, uhm, had chosen to be a volunteer for the Community Service Volunteers for a gap year between school and university because I wanted to spend a year, I suppose, helping other people rather than doing what I went on to do as an archaeologist.

1:26 I think the situation at that stage was when very large numbers of refugees were arriving both day and night from Stanstead airport and the volunteers – we lived on the camp site at one end of the complex and we just kind of did whatever needed to be done. I think as one of the younger volunteers I probably had less responsible roles but I could drive, so I spent a long time or quite a lot of my time driving round in a van, round various bits of the RAF complex with all sorts of things like toiletries and uhm that sort of thing that needed to be delivered to the refugees in different parts of the camp. I mean some of the families came to live in houses that had been officer’s – you know, in family houses but a lot of them to begin with were in dormitories essentially – things that had been the officer’s mess or whatever. Of course, that was very very crowded to begin with and this created all sorts of difficulties trying to get the right things to the right place at the right time, if you see what I mean from the store. I think that was the initial, you know, being around beginning to do that kind of thing, but as the camp became more established, so to speak, we stopped doing shifts. I mean you could be on very long shifts, night or day, to begin with. But I then started, as well as doing that, I was trained to work a switch board. So I used to spend part of each day on the telephone switch board for the camp and this could deal with any sort of call you know, and so I had calls coming in to do with families in the camp and to do with the administration of the camp and I had to basically find out who needed what call, and if necessary – because there wasn’t always an obvious person to deal with it – to deal with it myself. And the other thing I did which was quite interesting, was that I worked with the press officer to some extent at the time and therefore if crews, I can remember a twenty-four hours, you know, a BBC twenty-four hour documentary crew arriving and having to take them round and to show them various parts of the camp so that they can choose what to tape and similarly with the journalists, from time to time when the press officer themselves couldn’t do, you know there was much too much to be done because there was an awful lot of interest in what was going on. So those are the main things I remember doing, but I basically did what ever needed to be done.

5:01 I had to tell one family that their member of their family was missing in Kampala and uhm I could also see, once I got to know some of the families a bit better, that there were families who were quite wealthy in Uganda but had lost everything in having to leave Uganda and the shock of that, I think – the shock of on one hand losing a family members and on the other hand losing their er way of life, often as shopkeepers, was quite traumatic and I think that for some of them this took a long time for them to get over. I mean there were some families who arrived and they had family ties already with the UK, and I think for them in some ways, it was much easier because they could contact a family member in say Leicester or whatever, and this gave them some sort of er anchorage as to what was going to happen next. But I think for those who hadn’t got that and I think the overcrowding to begin with in Stradishall really didn’t help matters at all.

Difficulties in the camp

6:22 One of the things – difficulties, that I remember quite clearly is that there were some tensions between different religions. Between, we had Hindus, we had Muslims, we had Catholics originally from Goa, and we also had one family who were Jains, and also Sikhs of course – we had quite a lot of Sikhs. And, therefore, the kind of tensions that you see in South Asia today were at times apparent in that rather overcrowded and stressful situation… I think it was the overcrowding that caused it, because you might have you know people of different religions, and different ways of expressing their religious life, all mixed in together and that I think could cause problems. And I don’t, I mean, I can remember, we celebrated Diwali, we celebrated Eid, and I can remember some Sikh celebration. So it wasn’t that it wasn’t, you  know, it was part of the camp life.

7:38 It had been hoped that the Ugandan Asians weren’t going to arrive at all, until the last minute. And, the administration was a mixture of, well it was run by a retired group captain and there were people who had been in the colonial service in India if I remember rightly- one of them had been. And then there were few other civil servants, but mainly it was the volunteers and the WRVS and the Red Cross were particularly important. But many of the day to day things, even the departures office, initially, was run by volunteers and I think bearing all in mind I suppose it was amazing it worked, you know.

8:38 Once life in the camp became more established, we, as volunteers, we had opportunities to experience perhaps aspects of uhm, well their cultural life – not African cultural life, but essentially South Asian cultural life –  and one of these was Bollywood films were shown once or twice a week in the kind of winter months. And, for me that was, I had never seen a film of this kind at all and I found it quite intriguing, I really enjoyed them actually! And I think they were a way for everybody to relax, you know, in that kind of environment in which you know they were familiar with Bollywood films, but everybody relaxed and enjoyed them. Also, we uhm, towards the end, we sometimes went to eat with Asian families in the evening and they prepared whatever they wanted to prepare, rather than canteen food which had quite severe limitations, and so I discovered chilli pickles for example, chilli lime pickles and things I had never eaten before at all; hot curries which I have enjoyed ever since. So, I think that was a good introduction.

10:21 They often expressed a wish to go to Southall or Leicester or anywhere with a large Asian population ready. But many of the uhm what was eventually offered, were of course council houses in Welwyn Garden City, Stevenage, Hatfield, Milton Keynes, and by the end of it there was a sort of quite a large number of families who were difficult to resettle and this was not usually of their own making, I mean they were either particularly traumatised, or they had disabled members of their families or some other reason which may not be maybe less obvious and towards the end, there was quite a lot of, they would have to be sent to the other camps. There was a lot of persuasion going on, that they should accept housing in one of these new towns, rather than perhaps going off to places like Leicester or whatever and if they didn’t accept this housing, maybe they would be sent off to West Wales or wherever, somewhere like that,

11:37 I did stay in touch initially with one of the Asian families I think, yes I did –  a couple of them in fact. But I went off to University to do something very different, to study Archeology and Medieval History and after three or fours years, in fact, I had lost touch with not just the volunteers but also with the Asian families as well so and I think it’s the nature of the age I was, you know. That was just one stage in my life before I went onto do something different.

Learning from the experience

12:17 I had no contact at all with the outside world really for six months, other than the odd day off. I grew up an enormous amount, because I was experiencing, I suppose events at first hand which were for the Ugandan Asians quite traumatic, and so I was having to cope with a very stressful situation, and by the time I got to University, I could really see a difference between me as an eighteen year old schoolgirl and me as a first year undergraduate and I think that it gave me a maturity which many of the others didn’t have, but it also affected my life in as much as I thought well this is the nearest I want to be near a war situation in my life, because I could see the effects on the refugees.

13:32 I think that life in the UK has changed in the last fifty years, and I think what one of the things that has affected government’s attitudes is the housing crisis. Because, there are no longer-, there are now huge queues, for example, for council houses compared with the 1960’s, I think this makes it much more difficult to rehouse refugees, but at the same time, I think there’s a, perhaps public attitudes have changed, uhm which are completely at odds with perhaps a multicultural society, in accepting more immigrants because it’s thought that they would take people’s jobs, when in fact we have a labour shortage, at this particular moment. So I think there’s been quite a lot I think of intolerance, towards newer refugee populations. I think in terms of Ukraine, I think the situation is different in public perception, for a number of reasons, and obviously the Russian  invasion  of Ukraine is something that has come completely from outside, and I think that also because Ukraine is on edge of Europe, it’s perceived in a different way, but there still UK has accepted remarkably few refugees from the UK compared with somewhere like Ireland, for example.