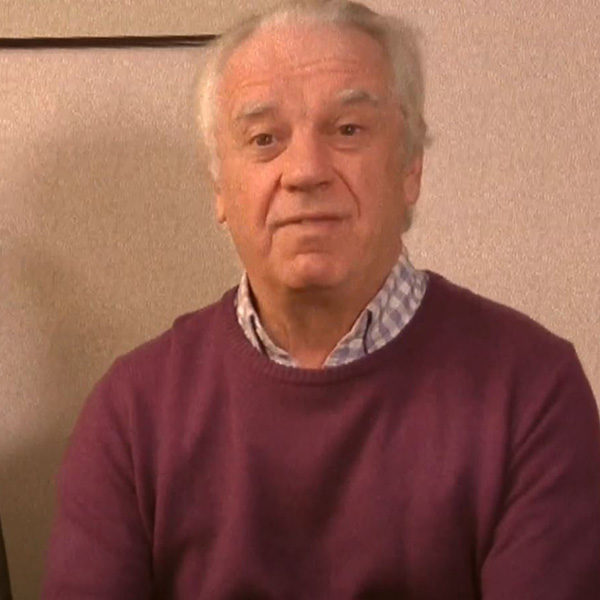 Robert Charles reflects on the life of his mother ‘Bunty Charles’ who carries iconic status for her voluntary work with Ugandan Asians and her numerous other charitable causes. Bunty was the driving force at the Heathfield Camp in 1972/3 during the arrival of Ugandan Asians – she left a lasting legacy. Other topics discussed include: the WRVS; camp operations; reflections on a lack of ‘red tape’; how it’s unlikely to be repeated.

0:48 My mother, Bunty Charles, was the welfare organiser for the camp in Honiton. She basically ran the place [laughs] as far as I can see. She certainly put a lot of effort and work into it. I was about seventeen, eighteen and we didn’t see her for six months basically. I don’t really remember how it actually started. I have got three sisters and my father, funnily enough, he had just recently died. He died in the April of 1972, aged fifty. The whole sort of erm, the Asian influx was something my mother probably threw herself into after my father passed away. She had been involved in the WRVS, you know, all my life I remember her being involved. Her main role, before all this came along, was she was involved with clothing which they used to bundle up and send out to Africa and several other countries. She had a van which WRVS provided, which lived at home. She had it there all the time and we would often go down to Newton Abbot or Corsham either collecting or delivering these great big bundles. I mean, they were huge, these bundles of clothes that they collected.

2:05 She was also very involved with the Devon Army Cadet Force and I think that’s possibly where the link came, because of the army camp. She used to do the catering for their summer camp every year which involved going to camps all over the country, spending two or three weeks catering for three or four hundred cadets. So she was very adept at dealing with a lot of people if you know what I mean. And, erm, I think then she-, she was also involved with meals-on-wheels, quite heavily involved with that. So again, all these sort of things. She basically she did voluntary work all the time. Apparently, she did a little bit of work up in Yeovil where they had a camp, and then when they decided to open Heathfield camp as it was then, they sent her down there to set the whole thing up.

She used to work, I mean all hours, I remember that she used to arrive home, you know, very late at night, and go in early. On two or three occasions, the buses arrived quite late at night, or in the middle of the night, and I was roped in to going down and help escort these refugees to their quarters, which I can remember were pretty grim. But you know [laughs] I think they were probably just pleased to have somewhere to put their head down by then, but I can always remember it was always at night and always dark and I always had a torch in my hand. And these poor people with their suitcases that were turning up out of the blue. And I felt, you know, desperately sorry [for them], but at least they were sort of being looked after you know and that was the main objective I think.

3:40 In terms of the speed of operation, the speed of the set-up, the facilities that were offered, it was an incredibly successful operation, you know. I think that erm, people look back on it and probably think well you know it was amazing, you know, in ninety days. I mean these days, I don’t you’d ever get it organised, there would be so much red tape and health and safety and blah blah blah blah. It would take them a year to get things organised.

We did meet a few of the Asians that came over and got quite, you know, quite friendly with one or two of them and they seemed to, you know, I wouldn’t say they enjoyed it, but they certainly appreciated it.

It’s a sort of gene that obviously ran in our family. My great aunt called Alex Stanley, she actually got an OBE for organising the WRVS effort in the Lynmouth floods, which were back in 1950 something – I can’t remember exactly when – but there were major major floods and lots of people died. And then in ’73, Bunty was awarded a BEM for her work and her effort. I think obviously the Ugandan Asians was a big major effort. But she had obviously done many years of voluntary work with the WRVS, meals-on-wheels, the Devon Army Cadet Force, etcetera, etcetera, and I can remember driving her up to London to go to Buckingham Palace, very exciting!

The camp had obviously been a big part of Honiton for many years when it was an army camp. When they closed it down, you did sort of feel that there was a limb missing of the town, you know, it was just something that had always been there, certainly since the Second World War. But, yeah, no, I can always remember it being sort of, you know, once it was closed, it was empty and the fact that the Ugandan sort of situation did actually give it another lease of life, made use of it for another few months, which was good, and then after that I think it was closed and it was never used again.

5:41 My father, Richard Charles, was a very, quite well-known character in Honiton, Dick Charles, and he was very much involved with the Rugby club. And the army camp used to provide, you know, quite a lot of players for the rugby and for many years they used to sort of supplement the Honiton Rugby Club with a few players from the army which was quite nice for them. But, he was also involved a lot in Honiton.

6:15  Well, Bunty, I think her career, if you want to call it her career, was sort of the highlight of her life really, without any doubt at all, her voluntary work was the most important thing to her, and she was always one of those people, one of these go-to people, you know. If you want to get something done, find a busy person, and she was one of those people, you know, and nothing would stop her getting things organised. Some of the stories she would tell, you’d be amazed at what she actually managed to achieve, on thin air really! Because I don’t think they had huge resources or money or anything like that. This was the other thing, the camp: when the Ugandan Asians came over, there wasn’t much money. I mean, lots of volunteering and lots of donations and very very little money. Bunty didn’t get paid. She worked there for six months flat out and didn’t get paid a bean. It just wouldn’t happen today I don’t think. You know, people would just be saying, ‘Well I’m not going to do that.’

Whether the WRVS has [still] got the facilities and the capabilities of doing something like this, but again, it’s probably wrapped up in red tape. You know, you look at the think what that they did. It was all about looking after the refugees, not worrying about the red tape, and all the sort of administration and the admin. I mean, where all the food came from, I really didn’t know [laughs]. Whether that was the WRVS again, probably Bunty organising it I suspect. I think also, I mean ironically enough it was quite handy that Honiton was on a trainline. My lasting memory is of meeting these people coming off this coach, and then they would have to go and get signed in and register or whatever it was, and then having to take them across this dark camp, late at night, wet, cold – and these poor people with their suitcases. I remember that distinctly. With a little torch. And then, of course, they would wake up next morning, wouldn’t have a clue where they were [laughs]. Yeah, it was quite an achievement I think, and I think probably it’s very unlikely to be repeated.