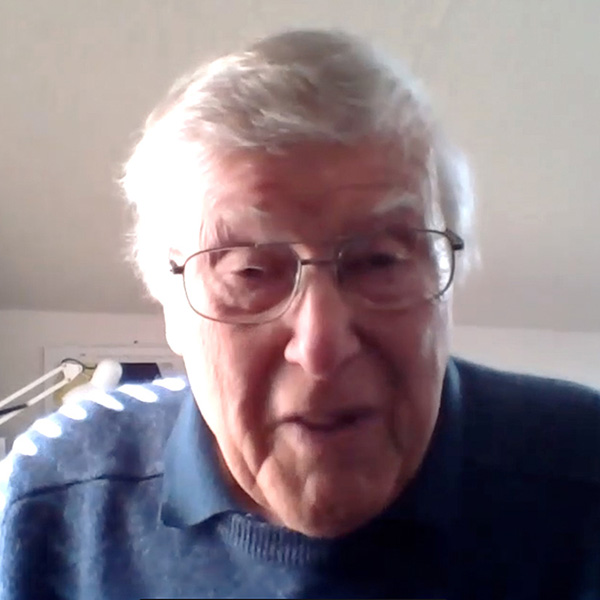 Ron Isles (a volunteer at Tonfanau resettlement centre) speaks to Praful Purohit (a resident at the camp). The previous day they had met for the first time in 49 years. Ron speaks about the initial conditions of the camp and how it was reported in the press. Topics also mentioned include: forming friendships; gratitude; how refugees adapted differently; Ukraine and history repeating itself.

Ron: Hi, how are you doing?

Praful: We meet again. It was nice to see you and Angela yesterday. It was quite overwhelming for me.

Ron: So brilliant to see you again after all this time.

Praful: I know, I know. It was so nice to see you both again.

Ron: It was remarkable to meet after all these years. Let’s put it on record that we’ve exchanged Christmas cards, every Christmas since then.

Ron describes the conditions at the Tonfanau Camp

1.11 In the tragedy really of everybody being moved to Tonfanau camp, it was a good to be able to help, particularly help one or two specifically. But, I have to point out that it just wasn’t ourselves that were involved. There were a lot of local organisations involved. Everybody in the area rallied round very well. We were members of an organisation called Round Table and all the organisations in the area, that’s: Round Table, Rotary, everybody – was asked to help, by the local council. So we were asked if we could help. So anyway, we went down to the camp, quite a few of us. We went to the camp and we were quite appalled by the condition. I mean, the army had moved out of there quite a few years before, so this was just a barren camp on a barren hillside. The accommodation was was pretty awful. So we got assigned several blocks, and we cleaned them. Basically got them ready. People coming in there, it was going to be… quite a challenge for them anyway, apart from the fact that they were refugees who had been thrown out of their country to get there. So that’s what we did primarily. That was before they arrived. When the people arrived, which as I recall, it was a cold night, it was dark, and everybody was confused and we then helped them. We got them, we were assigned a certain number of the accommodation, so we were able to help the people to find the huts, and get them settled in. But it was an experience to see people arriving with just what they could carry, I mean, literally one suitcase. Trades people had brought their tools with them, which made an awful lot of sense.

How the Press reported the situation

3:16 One of the problems that did arise was that locally, erm, people thought that-, the papers were misreporting that the people that were coming in were coming in to beautifully furnished flats – with refrigerators and furniture [laughs]. Far from the case! I mean they got a chair each, they got a rotten table each, and a bed, that was about it. I think probably one of our main contributions was that we were contacted by the Daily Telegraph, who’d heard that we were involved, and asked if we could take them to the camp and introduce them to various people. So he [the journalist] arrived and we accommodated him for the night, and we said, ‘We’ll take you down to the camp – providing- you tell the true story about what the conditions are like down there.’ And this he did. And it completely changed everybody’s attitude from then on, and there was nothing but support.

Help and support for the residents

4:22 We organised to get toys and things for children, and clothes, and it just came in. It came in by tons of support. And then of course, there were engineers in the Asian community and things like bikes and prams that were coming that were damaged – they were able to fix them. So we were able to help them and they were able to help us. And of course obviously, they were there for a lot of months, and close friendships formed. Especially the one we had with Praful and a man named Dilly, and we were able to take them home and give them a bit of a normal life after all this, this stress. So that’s what we did particularly. It’s an unforgettable experience. Because after we unloaded everybody the first night, we went back home and we sat there and we thought, ‘What would we take out in a suitcase – to leave the country- what would you take?’ And it was very uhm humbling experience for us to see this – we’ve never forgotten it. And the sad thing is, it all seems to be happening again in Ukraine now. The world is never ever gonna learn. I think people do help. I think people are helpful. I think that’s been clearly proved in this latest crisis in Ukraine. That so many people are prepared to take people into their houses and look after them. And I think people care. It’s the politicians that don’t! [laughs] Certainly people care – people power is a very big thing.

5:58 But the other thing that was quite surprising, was how some people that came, adapted and survived very well, and other people, it it was end of their lives; it ruined their lives. I mean, I seem to remember, there was one case of a man who had got a fleet of lorries there, and the last thing he did before he left was take the keys out of them and throw them away. And he never really recovered when he came back. And yet other people, I remember one guy, in no time at all was running a taxi service into Tywyn [laughs]. I mean, just adaptable. I mean, people- some adapted – some never got over it. It was a dreadful experience for them.

6:41 As you know, we just met Praful after fifty years. We kept in touch for fifty years by card, and now at last we’ve been able to see them, which were grateful for. And exchange what’s happened in our lives over those fifty years. It’s good to see that he survived and had a good life and he’s got his children… We just kept in touch because… we had formed a bond. I think, they were grateful for the help that we gave, I’m absolutely, I am sure of that. It’s marvellous to see that people are prepared to step up and do this, but er – why does it have to keep happening? That’s the question you ask, isn’t it? I mean, when are we gonna learn and start to live like civilised people and all look after each other?