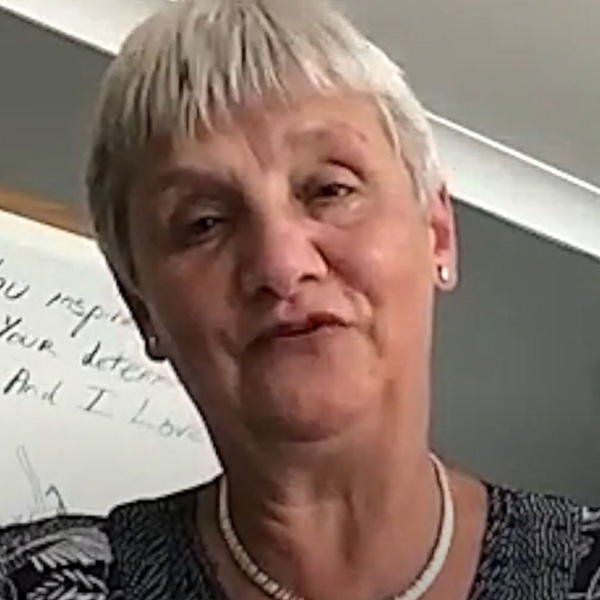 Sarah Richards was a youngster who helped her mother and grandmother at the Heathfield Resettlement Camp, Honiton, Devon. Richards recalls how she came to be involved in volunteering, her previous, limited, experiences with other cultures and races, and the ‘novelty’ of refugees coming to somewhere like Honiton. She recalls her recollections of the cultural differences: clothes; food; smells; the shock of the cold weather. She recalls forming friendships and learning a greater sense of gratitude for what she had and expresses a wish that everyone who came was able to make their way and be happy in England. Topics discussed include: weather; saris; food; WRVS; Bunty Charles; camp conditions.

0:47 My mother didn’t have a paid job as such, but she was involved in a lot of things. So she was involved with the church, she was involved with the Mother’s Union, lots and lots of different voluntary jobs, so before anybody arrived in Honiton from Uganda, my mother had been contacted by Bunty Charles and another lady called Beryl Shorthouse, who was a friend of my mother’s, and she was asked if she would help prepare the army camp huts for the Ugandan Asians to arrive. Bunty Charles was head of WRVS I believe, and she would phone around and see who she could get to help, and I think she just knew that my mother would muck in and get on with the job, which she did a lot. So my mother agreed to do it and within a very short time she enlisted myself to help her. I was still living at home at the time. I was seventeen and I was at college, so weekends or any time I had off, we were up at the army camp trying to make the rooms look a little bit better and making up beds which seemed at the time to be hundreds of metal beds, that all had to have sheets and blankets put onto them.

2:32 Growing up in Honiton was completely different than growing up is now. So, we were used to seeing Black people and foreign soldiers from the army camp. And because we lived relatively close, we used to see them going up and down into the high street but I didn’t have any friends that weren’t English. I don’t think I even had any friends that weren’t Devonian, to be honest! [Laughs] Everybody I knew was born and bred in or around Honiton – that’s just the way it was. So, it was a completely different thing to see people from a different culture, and their ideas, their religions, their way of eating, was very exciting to us.

3:32 We had seen it all on the news, obviously, and the very fact that these people were coming to Honiton was such a novelty, because normally nothing happened in Honiton! It would have been, ‘Oh people are coming to London, people are coming to Birmingham’, but it wouldn’t have been Honiton, so it was a novelty that they were coming at all. And, my mother was the sort of person that would help anybody, and so I guess that she wanted my sister and I to be the same. Erm. And so it was just something we did [shrugs]. I don’t remember thinking, ‘I don’t really want to do this’. That never crossed my mind. It was just something we did.

The thing which we noticed most, was the way they dressed, completely different way to us and very very quickly the smell of the huts. So, all the huts had been aired out as best as they possibly could be because they smelled quite musty but within a very few days, the huts smelt strongly of Asian food – completely different to our own cooking which in those days was very basic. So, we are going back a long while aren’t we! English people would be eating casserole, and hotpot, and sausages, and so it was completely different food to the sort of thing we were used to.

And, the main thing that I remember about the people themselves, was that they were so cold. Everybody was so cold. And it was cold but they just didn’t have the right clothing and so a lot of clothing was given to them. And in the photographs that I have, I can see that one girl has got on a cardigan which had obviously been donated, it was far too big for her. My grandmother was busy at home knitting for them and unpicking clothes of our own and remaking them for people at the camp.

6:03 So the two families that we got to know made us some food, and before they left a party was held where we were dressed up in saris and all the food was made by the ladies for us and themselves to enjoy, and yes, it was so interesting because there were no foreign restaurants around Honiton at that time, it just didn’t-, there just wasn’t, so it was all very different to us. And, again, having the families into our home was lovely to be able to do that, and let them sit by the fire and get really warm because the huts at Honiton were pretty basic, weren’t they? So it was nice to be able to show them our home. I don’t think we ever had them for a proper meal. I think they only ever came for tea and cake or tea and biscuits, and I don’t remember their reaction to that, whether they thought, ‘Oh this is disgusting and horrible!’ – I can’t remember [laughs], but they certainly did come several times, and, and have cups of tea and stuff with us, and carried on after they’d left writing to my mother.

There was a lady called Mrs Luka, and her two daughters, Smita, and Sita. Smita would have been around fourteen I would think, and the little one was only three or four. It was the daughter, Smita, that we kept in touch with, or Mum kept in touch with her. We got the impression that they’d had quite a hard life even before they arrived; that was the impression we got. The other family that we met, or the couple that we met, were Mr and Mrs Dave. They were older and appeared very well educated, and they already had a son here already, and I think he was a doctor but I may have that wrong.

When they came to our house, I think they were very happy to get away from the camp, because being in those little huts wasn’t very nice and they appeared to be very interested in everything. We had quite a large garden. They were interested in the garden, although it was winter time so it wasn’t very interesting really, but they-, I guess the flowers and everything were different to things they were used to. I remember taking the children Smita and Sita up to our bedroom. My sister and I used to sleep in the attic bedroom, so we had funny little stairs up to it which they thought was very strange.

9:19 As an experience of volunteering, I think it did us good to realise how fortunate we were in comparison to the people that arrived, because the very thought of having to get out of your country and leave everything behind was just awful. And not very many people seemed to be able to bring very much out. I-, I know Mr and Mrs Dave had brought a small, bigger than a suitcase, but like a little trunk, of saris and materials because that’s how we got dressed up in saris, they belonged to her. Wearing a sari for the evening was wonderful. I haven’t got a photograph of myself. I’ve got two of my sister, but none of me, I don’t know why. And I can remember, it took us a long time to get ourselves into it, to try and get it to hang properly and over the shoulder.

With regards to what it did for us, I suppose it just taught us to be thankful for what we’ve got really. If I had to give just one message, I would like to say that I hope that everybody that we met has made their way in England and been happy here. Erm, [pauses], which I guess, like anything, some would have been happy and some not so happy, but I hope they feel it was a good move coming here [nodding].