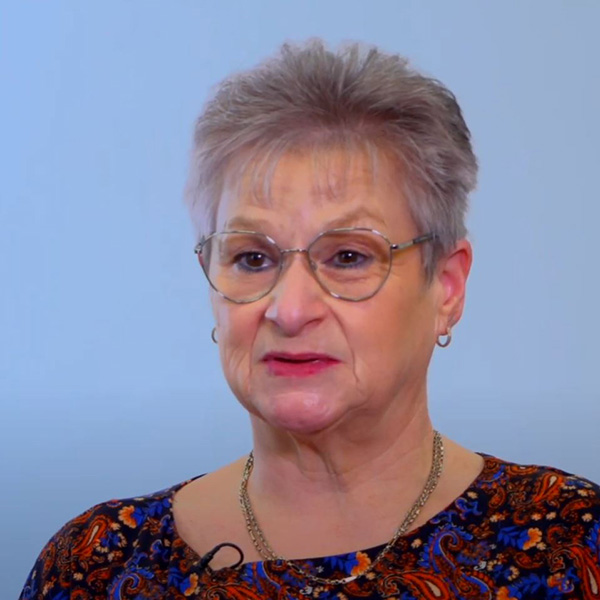 Sharon Williams was a schoolgirl in Tywyn when the Ugandan Asians arrived, she and her family volunteered at Tonfanau Camp. Williams recalls the sad sight of seeing the displaced Ugandan Asians arriving with so little possessions and recall feeling a frightened and scared at first meeting people from a different country. She discusses the lifelong friendships she made and the strength of the community in Tywyn at the time. Other topics mentioned are: cultural differences; reconnecting through Facebook; Canada.

Arrival of Ugandan Asians in Tonfanau

0:42 I was in school at that time, I was only thirteen. I didn’t really understand what was going on. We just knew that a lot of people were coming from a different country and we were going to look after them in the army camp.

0:55 So it was a great excitement for us as kids because we’d never seen anything like it, but we didn’t understand what was going on.

1:04 The first images were – we were on the station waiting for the trains to come in and everybody was piling out.

1:13 They’d got all sorts of weird possessions – umbrellas, briefcases – because they couldn’t bring anything with them. I don’t know whether they brought stuff to sell when they got here. But it was very sad because it was dark.

1:30 They didn’t know where they were. They came to the middle of nowhere. The station itself, was just one house, and then they were herded across the road into a military camp and into a big building where they were all billeted. And then we used to take them to different billets.

1:46 It was the first time we had seen people of colour, it was exciting – somebody from a different world, a different country. We didn’t-, I’d never met anybody from a different country until they arrived. So it was a … a big learning curve. It was quite scary actually, erm for them and for us, because we didn’t know who these people were. We didn’t know where we were supposed to take them or what we was to do with them. It was a very scary time when they first arrived, especially not knowing what to do.

2:24 I spent lot of time in the camp, but gradually as we got to know them, I made friends with a lot of them. A lot came to school with us.

2:33 We had a main meeting place in Tonfanau which was the old cinema and anybody that wanted to volunteer just went there and they were given duties of where to take people, where to get them food, where to get them clothing, because everybody donated stuff, so that they had extra things because it was so cold in the camp. The camp hadn’t been used for many many years.

2:57 So, you know heat was a problem, obviously. They’d had a long journey. But everybody that wanted to help just turned up at the camp and they were given duties to do.

3:12 I mean, as a child, I went with my family. Obviously being thirteen, I wouldn’t have been allowed to go on my own.

Making friends with the children

3:30 I think making friends with the children that were my age was the greatest pleasure. We had so much fun! They were so, so friendly towards us, as we were to them. We went to a lot of family do’s, family parties, and they came to our homes, we went to their billets, shared a lot of happy memories with them, although it was a sad time but at the time we were enjoying their company.

4:11 It’s only recently I found out a lot more through being back in touch with a couple that I was very friendly with. So, at the time it was all strange, all new. I mean living in a smaller community as well, we didn’t have people of different races. We were all Welsh country bumpkins! So it was exciting as well as frightening.

4:39 My parents actually met at the Tonfanau camp, through doing national service, so they were familiar with the site as well, so my mother, her sister and the rest of my family, so we were all involved in helping out when people arrived, taking them to their billets. The whole family, my whole family was involved with it.

5:04 I think in those days, this community was very family orientated. Everybody helped everybody else. Erm. We were a little town, all inter-related and anybody needed help, we went. Everybody used to help out. It was a different culture, back in ’72.

5:28 Everybody wanted to help, everybody wanted to do their bit to help out. They gave clothes, they gave food parcels, they were down the camp all the time. I, myself, and lot of my friends, we’d go to the camp instead of going to school, [laughs] but we learnt a lot going there.

5:51 We made friends because a lot of teenagers our age came to our school. So, we mixed in school with them, we mixed socially with them.

6:01 My family adopted this family, the Devji and Jamanis, and we made life-long friends. They came to our house quite often for food. They moved from here to a place called Bala. They were rehomed there, before they went toff to London and then Canada.

6:24 We built a friendship through caring for each other, basically. I mean, the two eldest children who weren’t adults, they were teenagers, they were the only two who spoke English. So they were sent here with the grandmother and aunties and uncles and other siblings and they were basically looking after the whole family.

6:51 So, when we were given them to take to their billet when they came, and we just adopted them as another family really.

7:00 We lost contact because they all emigrated to Canada. I did have an address but I tried several times to contact but nothing, and then two years ago, I had a message through Facebook and it was from my friend. She’d found me through Facebook and we’ve been in touch ever since. We speak every week. One’s in Vancouver, well, most of the family are in Vancouver, some have obviously passed away now, but the children are still in Vancouver and then I have one in Toronto.

7:40 I have never, ever, forgotten this family. I have photographs in my albums of them, from when they were children. Also their cousins who moved to Bala. We used to go over to their house in Bala. So, they’ve always been a part of my life, although we didn’t have a contact for many, many, years.

8:04 I am so thrilled now that they are back in touch with me, so I’m planning on a little jaunt to Canada! Next year, yeah. They want me to go over and meet everybody again, because some of them were babies. Erm. One little girl was actually born en route to Tonfanau. Now she is married with children of her own. So I want, I’d love to go and meet them all again. Because I have phoned them and it’s like there’s been no time lapse in between. They are reminiscing, I am reminiscing. It’s lovely!