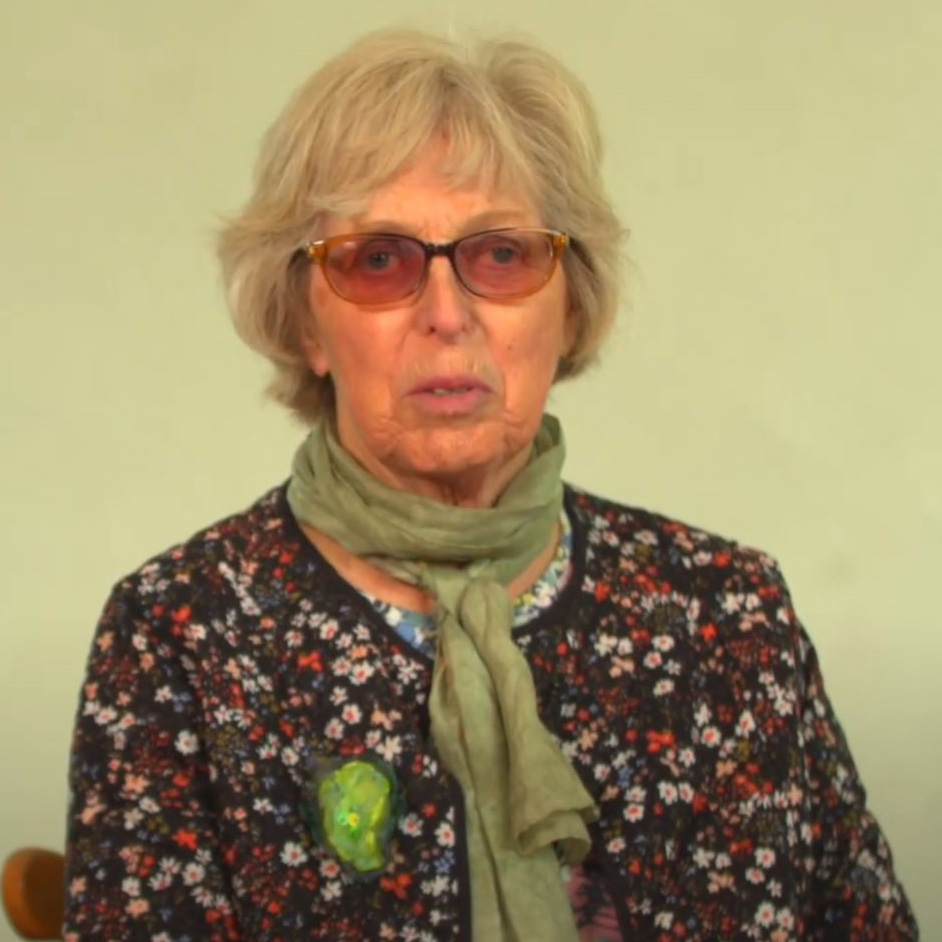 Shelia Bailey speaks about her experience working as a playgroup teacher at the Stradishall camp. She remembers examples of education offered, activities, art and singing. She discusses how it was difficult to get to know all the children but describes how she made contact with some more personally. She passes on a message of gratitude from one of the refugees she maintains contact with. Other topics discussed include: the barriers of modern paperwork; Ukraine; emotional trauma; and ‘efficient compassion’.

Involvement as a teacher at Stradishall camp

0:44 I had resigned from my teaching job because we were planning to go to Australia, but we didn’t go. So I was without a job that autumn and my previous headmistress talked to me about Stradishall, and she said, ‘You know they’re gonna need some help, they’re starting a playgroup. Would you be interested in going to help?’ So I said, ‘Yes, that sounds great!’ And Mrs. May who was the wife of Cannon May – Mayor of Newmarket – she had been brought from retirement to run it. She had been the area playgroup organiser and what she didn’t know about young children wasn’t worth knowing. And uh she and I travelled everyday, for about a fortnight, to run this playgroup and then as more and more children started coming into the playgroup, who obviously were much older than playgroup children. They were coming in because they were bored, they wanted something to do and the Education Authority –  Suffolk Education Authority –  stepped in and said, ‘well we’ve got to  do something for the older children.’  And that’s how the school got started and  I was asked  if I would like to help out with that. So it all began then.

1:52 It started off with the playgroup, feeling that there should be something to amuse and entertain the children and keep them occupied. And after about two weeks, as more and more older children were obviously finding that was the only place of interest and occupation, they were coming in and wanting to help and take part and it was at that point, about two weeks later, that the Education Authority realised they had to provide something more, for the older children. So in the aircraft hangars, they set up equipment, classroom, desks and all equipment needed for them, in two or three hangars or in one hangar. There were several classrooms operating, you know, at different ends of the hangar. I can’t remember exactly. And, staff, more staff were brought in, obviously. And er, that’s how it operated.

2:53 I don’t remember there being any particular guidance on what we should be teaching them, other than giving them a gist of what being in England was like and, and, keeping going the sort of general English and Maths – Maths, particularly because they all seemed to be pretty hot at Maths.

3:17 They loved art – and art activities always went down well.  And, I decided to do a saw dust firing, with making these little thumb pots, and that was very much enjoyed although children were rather disappointed when all the pots came out black [laughs]. But they quickly rectified that and they demanded bright colours to paint them with [laughs]. So, I was imagining they’d be beautifully polished and black and subtle, but no, they wanted the bright colours [laughs].

3:50 Uhm, I don’t know how I got into it, but singing was a great thing, and we did a collage at one time of uhm, Tom Pearce. Tom Pearce, ‘Lend me your grey mare’ which is hysterical to hear a classroom of Asian voices singing that. That was quite an experience [laughs]. I think that was much enjoyed –  whether that was typical of English country life, I don’t know but, it was a taste of what it was about.

4:20 Life for them was so strange, and so odd, that they were just pleased to be free and safe. There were so many children coming and then going. I mean, you know, your register would get longer each day as more children came in the door and you had to call out this incredible register. And then there would be sort of people who would be rehoused quickly, and had moved on. Uhm, it was difficult to get to know all the children obviously, because they were just names on the register, but with the ones with whom I made sort of specific contact with, or they made contact with me – their English was good.

It was a huge romp really, for all of us, I think, You know, just being in this enormous hangar as a classroom and it was just all so unusual and and the children were very rewarding. I mean there were some naughty children, and er mischievous children, you know, uhm – it was, yeah, it was good fun.

5:30 We took them on one outing, I remember, to Bury market and I think there was no problem. That was fine. And, no sort of awkwardness from local people.

One in particular, Asmina, she was always hanging around after school, just wanting to talk, and uhm, so she and I, you know, made contact more readily perhaps than with others who went straight away home, she was always wanting to sort of have a chat and find out more about what was going on, or just generally make a link, and so she and I have remained pretty close ever since. Things sort of materialised later as I got to know Asmina. I sort of later, after the camp, and other children, and their, their different uhm- sort of, traditions really, it was, that was, that became more obvious later rather than at the camp – where people were just I think, living from day-to-day, because you know, they really didn’t know, from the trauma of leaving. And er that first Easter, when Stradishall was disbanded, and from Stradishall most of the remaining people went to Gaydon, in Oxfordshire. Uhm, Asmina and her friend Zaira, came to stay with me that first Easter week in the sort of transition between Stradishall and Gaydon. You know, and Asmina came subsequently for the next two or three years. Zaira came one more time. Oh, and a little Hindu girl, came as well – Chandrika, she came actually that first Easter, I was getting mixed. And uhm, that was a bit of a problem – knowing what to feed them [laughs], because of their different dietary habits I thought, and so they suggested a saag. So we had saag everyday, which they thought was hysterical when they got home to tell their parents. But [laughs], but you know, they were easy with it. They, it all worked well.

7:57 Asmina wanted me to say, when I was talking to her this week about, you know, anything you want me to say, or not say, and she said, well, when I got to England and it was snowing – I think they arrived in early October and we had very early snow here – and she said we had spent this awful time on the plane and we were told to keep quiet and not to look around and you know, tension in the aeroplane, and then when it was snowing, Asmina wanted to go and play with the snowflakes. And her father admonished her and said, ‘Come on! You must kneel down and you must thank everyone for being here and being safe.’ And so she wants to let UK know that she is very grateful for being here and although she’s had a tough life – she’s had all sorts of physical problems – but she is one of those girls who says her cup is half full.

08:56 I think the relief of feeling safe, when when those families arrived – having been so harried and frightened. I mean Asmina’s father had seen awful things, which caused him, difficulty. Asmina had nightmares, she said. She didn’t talk about this at that time, she’s talked about this since I have been asking her, because I haven’t – I didn’t sort of bother her too much about you know, what it was like. She told me as she felt the need. But she did say, she was bothered with nightmares for quite a long time after

9:34 I mean they were leaving Uganda wealthy people, most of them and then leaving with fifty pounds in their pockets or that might be taken off them if they displeased someone in the queue. So they were people who really were being stripped of identity and if one doesn’t have compassion for people going through that then, I don’t know. There’s little hope for us. But, I think, what we provided was probably uhm, well it was what was needed at the time and they seemed to be resettled very efficiently, seemingly pretty efficiently and quickly. And, Stradishall only lasted the two terms, before the numbers went down so much and the remaining ones were, you know, filling up other camps as Stradishall closed, and other camps were closing. Uhm, I think it was an example of efficient compassion if you like. I like to think it was.

It was a great experience and I’m very sad to think that you wouldn’t be allowed to do that now, to take a couple of children home and give them a break – which is was what it really was all about.

11:05 I think the compassion is there. I mean, goodness knows – how many people are offering homes to the Ukrainians? But can’t get the whole thing processed? I mean this is the, the ridiculous state we are in now when there is more people than ever are aware of the need of others and they want to help and yet the sort of slow grinding of paperwork is holding the whole process up.

I am very pleased that I was able to be there at the time and help, yes, and how the friendships that I have had.