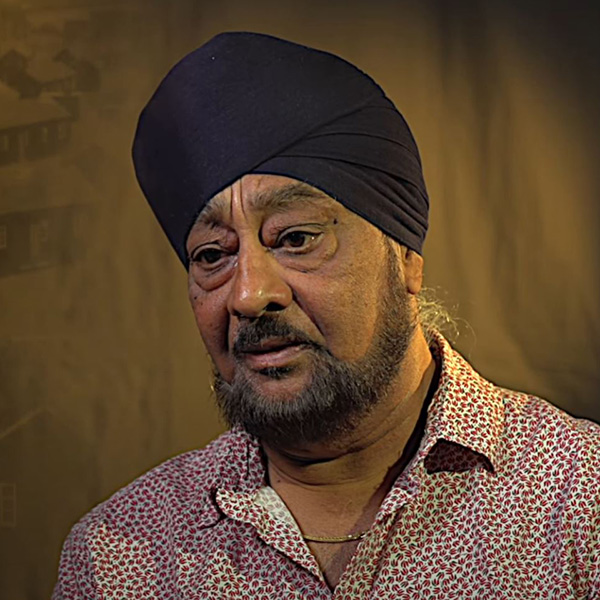 Teji Sond describes his experience of being forced to leave Uganda in 1972. His family went to Heathfield Resettlement Camp in Devon. Teji went on to become a highly successful process engineer. He has a passion for playing and coaching hockey, and he co-founded the Bristol Indians Hockey Club. Sond discusses his memories of his families hurried and traumatic expulsion. He emphasises the impact of the friendly people of Honiton and the helpful volunteers and how they inspired him to become involved in giving back now himself. He also discusses a violent racist incident he experienced with skinheads. Also mentioned is memories of being ‘spoilt’ back in Uganda; the WRVS; food; entrepreneurship; cold weather; giving back.

0:46 When we first heard, we just couldn’t believe it. You know. All my brothers and sisters were born in Uganda and you know, this ninety day thing, it took a couple of days to say, ‘Is this true, is this what’s happening?’ And yeah, it was happening and it was just panic! You know, travelling from my town, Barara, to Kampala first and then to Entebbe, the journey from my town Barara to Kampala was … was hard, was hard. We had ladies, my sisters with us and we heard stories what was happening to ladies, and they had, I can remember, ten or twelve checkpoints to get into Kampala and we were stopped. At every check point you have kids with sub machine guns [laughs], not educated, you could see they were not educated because they asked for passports, you gave them a passport, they’d open it upside down and then they know you are looking at them and then they would look at the picture and turn it round, couldn’t speak much English, and er all we had – camera wise or watches, or anything like that – was taken, little by little it was taken. By the time we reached Kampala the capital, basically, all we had was a bit of clothing left, nothing else.

2:44 The garage business we had used to service the army vehicles. So when Idi Amin announced ninety days get out, we were all panicking and getting our stuff. Obviously, you know, all the assets were frozen so we couldn’t get no money out. Local money we had, we got that together. And, basically, there was a knock on the door after a week. My brother opened the door and there was an army guy with a machine gun asking for my brother to hand over the passport. He said, ‘You are not going because you are servicing our vehicles, army vehicles. The rest of you can go.’ So my brother said, ‘No, I need to go, because I need to go with the family. President Idi Amin said go.’ He said, ‘No, you are not going. Passport please.’ So, what are we going to do now [laughs]? So, he handed his old passport to this army guy, took a chance, and he just took it, looked at the photograph – expired passport- right? He didn’t look at the dates. He just looked at the photograph in there and said, ‘OK, I have got your passport, you can go and drop your family at the airport now. When you come back, you can have your passport.’ So he thought [laughs] my brother is coming back, but he didn’t. Obviously he had another passport which was in date and he flew with that passport.

4:44 My first memory was we flew into Stansted Airport on 10th of October. We had never seen snow in our life over there. It was snowing. First experience was, we didn’t have any warm clothing and straightaway they took us to a charity shop which was at the airport itself, for our jackets and stuff. It was run by WRVS, I remember that very well. Very helpful, very very, helpful. And, from there onto the coach, on to Honiton – our home for about four months, four and half months. We only came here with fifty quid per family and basically we was, we were hungry, hungry for work. I was seventeen so I wanted to study because I was an apprentice motor mechanic when I came here, and I wanted to do that because back home we had a garage business. I wanted to do that because my brother was a motor mechanic as well. But at that time we wanted to go out and work really. We did find work and my first job was at the canteen at the camp.

6:24 My elder brother, he was given charge of running that side of, you know, food – curries and stuff like that for the Asians, and breakfast in the morning, Indian breakfast. So that’s why they put him in charge of the canteen. So he was working and my middle brother was working there and I joined them as well. So all three of us were working in the canteen. It started of for me, you know, I was washing all the dishes to start of, and then they moved me into, ‘OK can you fry eggs in the morning?’ And, which I did. We were just hungry, work hungry really, because we wanted some money very quickly. I always remember that there was a knock at the door in our hut and the lady said, ‘Can all you guys come to the reception?’ Ten o’clock in the morning, whatever the time was. So off we go to the reception, right, queued up. My elder brother in the front, he got to the table and the lady said, ‘Sign here.’ And my brother said, ‘Oh what am I signing for?’. ‘Social.’ Well, we had just come from Uganda and we didn’t know what ‘social’ was. But the lady did a good job explaining that you are entitled until you get a job. But he wouldn’t have it. He said, ‘No. I don’t want charity. I am just a skilled guy’. You know, we all talked a bit of English, so he said, ‘We just need a job.’ After a few years, we realised that yeah my brother turned round and said, to all of us, ‘Get out of the queue. Go and find jobs.’ [Laughs] And that’s why we got involved in the canteen.

8:34 We had some good times here at Honiton. People were so good. When I left the camp, I was still seventeen. Obviously, we left at the end of January, the camp was closing in February, so we were one of the last families to leave, and there was a few families left as well, so we had to go to another camp called Doniford camp in Watchett, in Somerset. The reason being that two of my brothers got a job in Bristol, in a small village called Thornbury, outside Bristol. There was a job plus a council house, but our council house was not ready, so we had to go to Doniford for about four weeks, I think it was. From there, once the council house was ready we moved to Thornbury and I still have some very good memories of Thornbury. We have left Thornbury, and we live about three, four miles from Thornbury but we still lot of people there, and, again, the country did wonders for us lot.

10:10 Our life in Uganda, obviously my parents were quite well off. Erm. I would say we were spoilt, looking back. You know, I talk to my kids about this all the time. We were spoilt, because our parents were quite well off. We didn’t do any work. My cleaning, washing dishes – everything was like, you went out, came back, threw your shirt in the laundry basket and it was all cleaned up, hanged up, and it was very comfortable back home.

10:59 We used to go to a pub where all the university Asians would hang around. Suddenly, we went there one evening, then suddenly skinheads walked in, about eighteen to twenty of them. And… we were in a corner, they were shouting – nothing racist at the start – until one of my mates went to the toilets and that was it. They found out there was a few Asians here … and that was it. So as we went out, my brother was followed out by skinheads and outside it broke into a fight. There were four of us, about eighteen or twenty of them. We all got hurt, you know, I got stabbed in the chest, err had a cut up here at the top [indicates his forehead]. Err, [pasues], my brother hurt someone else, one other skinhead was hurt as well. This went to court. This what I am saying – there is racist people – but there’s some good people, some very good people and I was amazed that the-, the people that came to court, from some were as far as Newcastle. One couple in Bristol was from Newcastle. And they came back: ‘It’s not their fault. They were here. It’s the skinheads that started this.’ So, you know, there were a load of people, all white, they were all there to say ‘Look these guys were not at fault. They were just having a drink and they were going home’ or whatever, and skinheads were there shouting and all that. Yeah, even there was a bouncer there, there was only one bouncer and even he came to court as well and said that. So, you know, at the court, most of them, and they were given time. And we had-, you know, we were given-, they gave us some compensation to us lot, but what it is is, you do get it, but the majority now never had issues.

Giving back to society

13:28 Yeah, I played a lot of hockey, got involved in hockey, and I have just finished playing hockey now. I am now coaching. I have sixty to seventy kids coming for training and I will be coaching them. So that is something I want to give back to my club. I’ve stopped playing because of my knees. My knees were damaged. I have just retired now, last year and I was thinking with what these volunteers did for my family, er I need to do the same really. I need to go to a charity shop and work, maybe couple of days a week to help out, and that’s only because of what the guys, the volunteers done for us lot. It’s an eyeopener really.