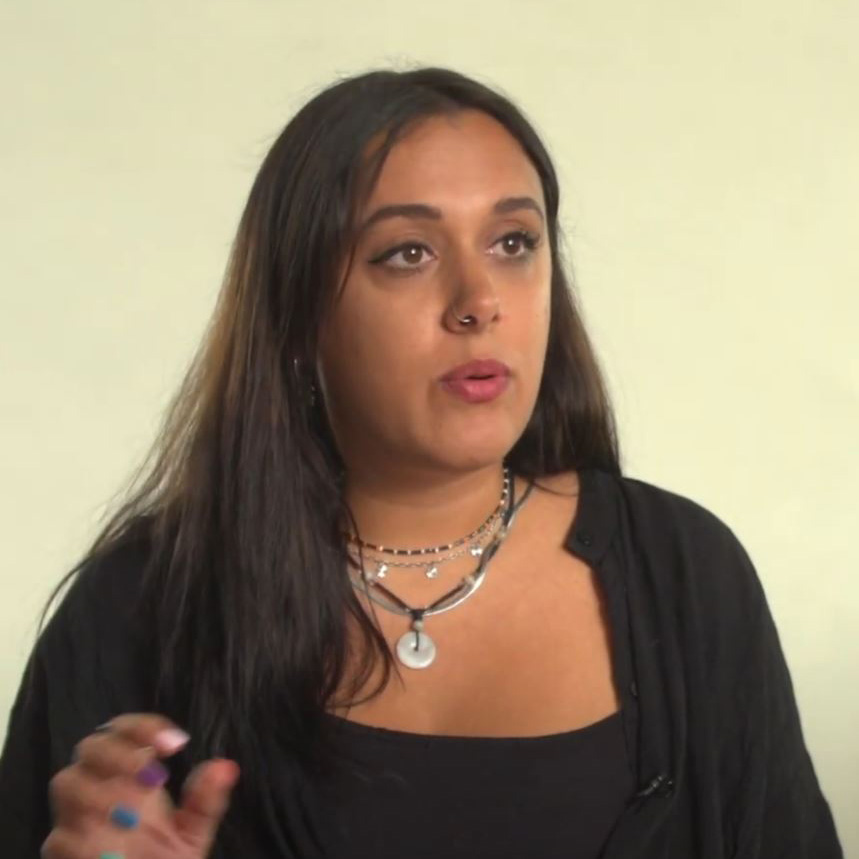 Vanisha Sparks is a third generation British Ugandan Asian, she speaks about her families experiences, being suddenly displaced, becoming residents at Stradishall camp, , getting used to the cold, eating strange foods, gaining employment in the local factories, moving into the local Suffolk area and making friends. Her grandma still lives in the Council house the family had moved into in 1973. Other topics discussed include cultural differences; the lasting legacies of being appreciative and hardworking; the importance of remembering; and generational differences between her mother and grandmother’s lasting fears attached to Uganda and her own desire to now visit and reconnect with that past.

0:45 My grandmother, my mum and my aunties, they lived in Kampala, in Uganda. They had a simple life, I think – but happy. One day everything completely changed, just overnight. So, everything was normal, and then just overnight, er people were giving out leaflets, where Idi Amin decided to basically expel all of the Ugandan Asians from the country. So they were given ninety days to leave. Just overnight with no-, no warning, no choice.

1:24 At the time they were given just a suitcase each that they were allowed to take with them, and fifty pounds. Fifty English pounds, at the time, they were allowed to take. So they left everything behind. There were two dolls that they brought with them. One that my mum carried with her, which is still pretty intact [laughs] – it falls apart a little bit – and the other doll, my grandmother knitted a dress and a matching hat for her. So they still have that today as well, and a matching outfit with a little handbag [laughs]. Erm, what else? They have all of their passports, so the passports that, I think one of them is from like the 1930s/1940s and it’s in better condition than my own personal passport that I have today. They have the wedding photo, they brought some pots and pans, some plates, and a radio. They brought a radio with them because that was my grandad’s favourite thing to do, to listen to the radio. He always listened to the radio.

2:31 Well, they came from Kampala, Uganda, where it’s very, very, hot! Very, very, warm, –  tropical – country, to freezing cold England in October. So I think their first impressions were definitely freezing cold. They, they got on the planes, they got off the planes straight onto a bus, and brought straight to Stradishall camp. So, a lot of them straight away were not wearing very warm appropriate clothing. Freezing cold. [laughs]. Yeah, but I think, there was a lot of relief, to just to be here. When they first came to the camp, they shared one converted air hangar that had been changed to adapt, and erm-, house three different families. So the air hangar that they lived in was separated with just wardrobes. So there wasn’t a lot of privacy and in each little section of the air hangar, separated by the wardrobes were whole families. So my family was in one. So that was my, my granddad, my grandma, my auntie, and my mum, in one little area, shared with the families. Which, in my head as well, I can’t imagine the emotions, and just needing a bit of space probably after all that they had just been through.

4:07 I think in the camp when they arrived there was a lot of support and medical care, education there as well. So they were lucky in the sense, that they had that access. There wasn’t a lot to do inside the actual camp, but luckily there were education classes and classes to learn and practise English. So, I know that they did attend those which is nice. For the first few days, probably for the first few weeks there, the food was not at all what they were used to, and not even all what they could eat, because my family are vegetarians as well. So yeah, so strict vegetarians through their religion. So, to come here, probably there was [laughs], a lot of meat served, and things that probably they would have never seen in their lives. I know after a few weeks some of the Ugandan Asians started taking over the kitchen and in the afternoon they would make Indian tea – so they made it work – with the help of the volunteers.

5:06 They did make a lot of friends, especially with the volunteers. And, they had one special friend, Denise. Yeah, Denise. So Denise was a volunteer in the camp, and they stayed friends for the whole of the last fifty years almost – she passed away last year. So, yep, they remained friends, they used to exchange Christmas presents, they used to see each other often enough after all that time.

5:36 One of the biggest things that definitely impacted my grandmother was having to go out to work. So, in, well in Indian culture, but also in their life in Uganda, it’s very traditional for women to look after the house, look after the children and my grandma had zero work experience outside of the house. So when they first came to the UK, after a few weeks, luckily they were given erm work opportunities around the local areas and that included my grandmother. So it’s the first time in her life that she had to go out very early in the morning. There were buses provided, when it was still dark, which is a different experience for my family as well [laughs], to go out in the freezing cold dark weather [laughs]. But, yep, so they were put on buses, taken to another local town, and she started work in one of the factories, and it would be very long day, and they would come back on the bus, in the dark, in the evening. So a whole new experience.

6:40 My family came at a very busy time of year for both cultures, for British culture and also from our Indian heritage side culture. So, at the time of the year they arrived there are lots of events and the volunteers and the refugees and everyone that worked in the camps all came together and celebrated different events like Diwali, which was new for the volunteers, and the people who were from the UK, and vis-versa  celebrated Christmas and New Years, which was a newer experience for people like my family. So that was really nice and the community also were very open. So lots of the volunteers and the staff who worked at the camps were… very welcoming in that they would erm help and take out people like my family, my grandmother, my auntie, my mum. They would invite them over to their house for cups of tea, show them around. I know there was a lady that my mum-my grandma worked with – she used to help her to do the weekly shopping, and show her how to shop and take her to the shops with her. So there was lot of support in that way which is nice.

Life after the camps

They stayed in the camp for about two months, so quite a long time, and then eventually they were relocated to one house just outside the camp where they stayed, I think just for a couple of months. And then they were then relocated into a local town here in Suffolk, where they have stayed ever since. They were given a local house through the council, where they then had to pay their rent, pay all of the bills. Nothing was given completely for free. But luckily through the jobs that my grandma and my grandfather had, erm they were somehow able to scrape by and support the family and everything that they had. So yes, so they were then relocated into that house and they still live in that house and they still have that house, and some of the original furniture that they were given right from day one, it still exists in that house. Yeah, it’s amazing, that’s amazing!

9:42 Following on, a few years later with my grandfather’s death, I think it was really hard as well. Erm, yeah, leaving just my grandmother, and my mum and my aunties in the house to support themselves, I think was really difficult. Today we are quite a strong family unit. We are quite close, me especially to my grandma and my auntie. I think they live, very much like how when they first came here. They live very simply but are very content and very happy with what they have and their day-to-day lives. They are very – gentle, people and they really appreciate everything that the community has given them. For me. I think they’re very British [laughs]. They love what was given to them and the support that came to them and I think they will never forget that, and that’s really important. And that comes through in the way they behave, in the way that they care and the way they treat other people, for sure. Their whole lives have been intertwined with what was given here. So, my grandma worked in a lot of the local factories most of her life right until she was retired, working long shifts with people very closely who also supported them when they first came here. My auntie then went to work for the civil service – so also helping to give back to others, and my mum worked in the local prison which was turned into prison from the original camp. So, [laughs], so her journey coming from the first place they went to, to then working every day in the prison was pretty cool. So their lives are very connected to everything that happened, I think.

11:50  I think, for my family, my grandmother especially, it would be really difficult to go back and it would still be, there would still be a lot of fear attached to it. Me personally, I would love to go [laughs]. I would love to visit and I would love to see what it’s like today, to see what the history of it is like, and to live through all of that and the places where they used to live – I would love to go. But for them, it’s still, still very raw after all this time. I think it’s really important to share these stories. Erm… I don’t think it necessarily has to achieve something, but I think even to just share awareness and reconnect with other people who were there as well, I think for my family it’s really important for them to know that they were not alone in this and that there were other people and these people care about what happened, and they want to speak about it and they want to share it with people. For a really long time having conversations about what happened in our family history just… didn’t really come up, and it’s not something that we’ve spoken about for a really long time. The last couple of years there’s definitely been lot more conversation between us and we’re definitely finding out so much more about our- our own history. So the fact that this project has come at this time where we’re really going through our- what happened, and who we are, it’s come at a really good time [laughs] and we are really impressed with this project and really excited to see what else comes out in this next upcoming year. Yeah it’s really cool to reconnect with it all.